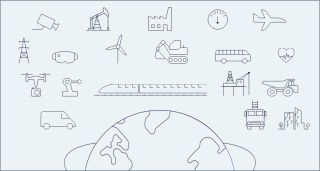 You can be excused if you are losing track of which iteration of the industrial-technology revolution is happening this week. Despite the hype, there is a key shift happening as we move from the current age of digital transformation to the age of automation and the connected life.

This latest change, referred to as the 4th Industrial Revolution (4IR) by the World Economic Forum (WEF), is about the further embedding of digital technology within our society, economies and lives.

One of the components of this 4IR will be the internet of things (IoT) and machine-to-machine communications (MTC), which are just getting started. Over the coming decades, the numbers of machines communicating with each other — and sometimes directly with us — will soar to billions of devices, far exceeding the numbers of personal mobile phones currently in use.

Industry will be a principal adopter, but a vast range of vertical markets, such as healthcare, energy, transportation and the public sector, will also embrace the IoT/MTC opportunity. While much of the early excitement has been around the digitisation of the home, it is enterprises that will be key drivers of IoT/MTC. Competitive pressure will push forward the adoption of technology, connecting automated and robotic systems with connected workers, partners and suppliers. Mix in big data analytics and artificial intelligence systems, and it is not hard to see how this will revolutionise the entire ecosystem affecting industries right across the economy.

Some of the many benefits that will drive the adoption of 4IR include greater reliability and quality, worker efficiency and education, faster inventory turnover and near-continuous production, equipment maintenance and safety, improved management of product lifecycles, and pro-active support systems for greater customer satisfaction.

Supporting and making this critical shift possible are a collection of digital communication systems, some already in place and others evolving to meet the challenges and opportunities of the coming age of automation and connected life.

Key among the various communications systems is wireless. Today that means 4G/LTE, tomorrow, 5G. New spectrum is being re-allocated by governments, while other spectrum will be shared (sub-6 GHz in the US and 2300-400 MHz in Europe). The wireless industry is also expanding the use of unlicensed spectrum such as 2.4 & 5 GHz-based Wi-Fi and LTE-U, as well as a new MulteFire standard also in the unlicensed 5 GHz range.

Fixed networks, both optical and copper-based, will also continue to play an important part, however. Many of the legacy systems are built around “wired” network technology. For many applications wired networks may continue to be the optimal match for their requirements.

Nonetheless, there are applications that can only be addressed wirelessly, and in some cases, are classed as ‘mission critical’ in terms of latency and performance requirements, so place very demanding requirements upon technology and the network. Examples include industries in the transportation, power utilities and mining and forestry sectors. Private LTE networks using shared or even unlicensed spectrum are rapidly gaining ground in many of these industrial sectors. Whereas LTE has been primarily used by public mobile service providers, it is also an excellent technology for setting up robust and carrier-grade private wireless networks. And, because the underlying technology is the same, enterprises can also create hybrid private-public LTE networks to link their private remote operations across the service providers’ public networks.

Does all this sound complicated? You can safely bet that this is one of the principle challenges facing most enterprise IT departments — how to manage the complexity involved in running multiple verticalised networks to address different parts of their business.

It is therefore critical to simplify, consolidate and integrate the various communications systems. Having versatility in access media is essential. We need copper wire, coaxial cable, fibre optics, microwave and various forms of licensed, shared and unlicensed wireless spectrum. Each has its role to play. Ideally, however, they should all be anchored in a common core.

Mobile and fixed networks have traditionally been built as separate networks with separate cores, which was economically and operationally supportable for very large public telecom providers. Most enterprises, however, do not have the scale to support more than one core network. The good news is — they don’t have to.

After many years of divergence, mobile and fixed technologies are converging on similar approaches to the core; such as the continued evolution of the 3GPP Evolved Packet Core and, moving forward, the 5G next-gen core.  This new converged fixed/wireless core supports diverse service and application characteristics and addresses many of the training, security and cost issues raised above.  A common core also allows distributed enterprises to interlink easily with public service providers to cover their entire footprint and ensure business continuity globally, if required. IoT/MTC can be further optimised within the packet core with the use of new capabilities for increased throughput, performance and flexibility to meet differing enterprise business models.

The other good news for enterprises is that the core network is now cloudified. Turning up a cloud packet core to support both mobile and fixed access networks can be done very quickly and provides increased levels of automation. This allows for very flexible deployment scenarios that possess the agility to dynamically respond to change. With software security disaggregation and capable of being based in the cloud, it meshes easily with an enterprise’s big data and digital transformation initiatives. As IT departments move increasingly to embrace public-private cloud infrastructure, their core network functions can be deployed in a distributed architecture to realise the economics required for the service and application being deployed.

We are in the process of digitising all aspects of our businesses, from sensors to big data analytics. What is emerging is the enterprise of the future — a business built around a highly agile, distributed, secure computational cloud that will keep everything intelligently and efficiently running smoothly and capable of responding instantly to shifting patterns of demand and supply. Multiple forms of wired and wireless access will physically link everything to everything else and at the fast beating heart of this dynamic enterprise today is a scalable, flexible, reliable, high performance common cloud packet core, moving to a 5G next-gen core in the future. The cloud packet core gives the digitised enterprise a platform to embrace and profit from IoT/MTC and mobile broadband, making this fourth industrial revolution a reality.