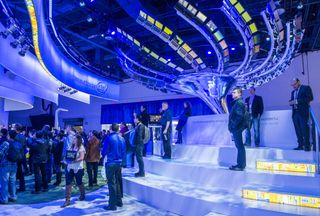 What was the big question everyone should have been trying to answer while CES celebrated its 50th year as the global flagship show for consumer electronics?

It wasn’t about the show, which was a great event with all the sparkle of Las Vegas and as ever, was consistently exciting, with amazing levels of innovation, creativity and self-confidence. No, the big question concerned refresh cycles.

Touring the exhibition halls in Las Vegas, it was clear that the length of time it now takes for the average consumer to buy a new PC – five years – is getting too long for everyone.

Do consumers really want to hang on to devices that are slower and have less functionality than the new models that are on the market now? No, of course not. There was nobody at CES who believed that.

In reality everyone knows that the biggest barrier to consumers refreshing more often is the purchase price. When there are no mould-breaking new models with amazing capabilities tumbling out of factories, the temptation for consumers is to put off upgrading and put up with ever-declining performance. That is not good for consumers, resellers or manufacturers.

Yet we know the solution is out there in the shape of risk-backed promotions. It is just a question of the industry waking up to their potential.

A survey conducted for Opia by polling firm Censuswide revealed that across the UK and US, on average 71 per cent of consumers are willing to upgrade to a new laptop within two years if retailers can guarantee them a rebate of 50 per cent on the original purchase price of their current model.

Although there are slight differences between the two countries – with 73 per cent of US consumers and 69 per cent of UK consumers responding positively – the results point to guaranteed future value (GFV) promotions of this nature being a potentially powerful solution to the declining PC market, allowing retailers and manufacturers to reset consumer expectations and buying-behaviour.

GFV promotions are also very adaptable. Whereas a 50 per cent rebate can be offered on upgrades to devices of equivalent or greater value, three-year GFVs with rebates of between 20 and 60 per cent can more closely track actual depreciation and be more efficient in some markets. In addition, retailers or manufacturers can also take advantage of end-to-end sales promotion management, in which returned devices are taken care of by the promotion supplier and distributed to new owners.

If this sounds a little too convoluted to be worth re-reading, just consider the potential gains from GFV promotions. In the US for example, the average consumer spends $500 on a new laptop. If the average refresh cycle were to be reduced to two-and-a-half years from five years, retailers and manufacturers could theoretically see revenue balloon by more than $170 billion over a five-year period. By anyone’s standard, that’s not a bad increase.

The problem of ever-lengthening refresh cycles may be acute in the PC market, but these kinds of data-driven promotions have equal relevance in other consumer electronics markets, such as washing machines, TVs or smartphones. The growing reliability of machines and the absence of ground-breaking innovation that would for example, provide the TV market with its iPhone equivalent is leading to lengthening refresh cycles.

If manufacturers and retailers are to break out of long replacement cycles, they need a mechanism that locks in customers with something better than price-slashing. All that constant discounting achieves is steady margin-erosion and the expectation among consumers that there is always a deal to be had around the corner if they hold out for it.

The mechanism also needs to be a promotional tool that works beyond PCs and will enable brands and retailers to build loyalty for other technology-led products, such as white goods or kitchen gadgets.

It is here that GFV-type promotions have the edge, since their benefits should become apparent consumers as soon as they are explained by a retailer. Why should the consumer be sticking with an old version of their operating system on a laptop that is plagued by viruses and takes an inordinate amount of time to boot up, when he or she can have the latest model at a discount? If they just want the best deal irrespective of brand, then surely this guaranteed future value deal must make sense.

For the customer, the deal does more than just give them access to an efficient version of the same technology they had before – it gives them a device that is more advanced with greater functionality.

For the brand it means that instead of selling one laptop to the customer every four or five years, it sells one every two years. This is a mechanism that allows it to double the volume of sales from within the existing customer base, while simultaneously addressing the problem of declining unit prices as a result of competition and technological innovation.

This is surely a much better strategy for any brand or retailer than engaging in costly battle to claw market share from rivals.

Unfortunately, the potential of this type of innovative promotion is not always fully understood even though the risk is carried by the promotions company, which indemnifies itself, using its expertise in the field in combination with data analysis.

If these markets do not wake up to the insurgent effectiveness and flexibility of these propositions, in which the risk is carried by the promotions company, there’s a danger that just like CES itself, many consumers will eventually be celebrating a golden anniversary. But in this case it might be the 50th birthday of their laptop or TV. In whose interest is that?

Continuing in the old ways and making little or no attempt to break out of longer refresh cycles not only hurts retailers and manufacturers but also consumers, who are excited by the introduction of new features but feel unable to justify purchasing a new piece of hardware every two or three years. The solution, however, is up to the manufacturers and retailers.