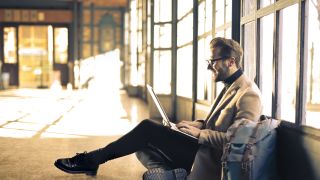 The arguments against or in favor of remote working policies have been raging for the last few years. With companies like IBM and Yahoo! bringing employees back to the office to foster a more collaborative environment, to behemoths like Apple and Amazon, that offer the flexibility of working from your couch, there’s an obvious discord when it comes to the best place to foster productivity.

Like any good argument, there’s a point to both sides. As John Sullivan, a professor of management at San Francisco State University who runs a human resource advisory firm, was quoted in a New York Times article, “If you want innovation, then you need interaction. If you want productivity, then you want people working from home.”

But here’s a thought: 21 percent of Americans are online almost constantly. For Millennials (age 18-29), this number bumps up to 36 percent (Pew Research). Another study from Gallup found that 43 percent of employed Americans said they spent at least some time working remotely last year. Whether it’s in the office or somewhere else, people are connected constantly, and are already working from wherever they choose.

Furthermore, 44 percent of women and 37 percent of men say they prefer to work at night. Another study found that nearly half of American workers would forgo the corner-office job and a high salary to gain more flexibility in their schedules. If it’s possible for employees to be connected and work where and when they choose, flexibility should be a no-brainer for employers, right?   As technological advances, such as autonomous cars and virtual reality (VR) take hold, it will be interesting to see how employers’ views shift when the ‘work from anywhere’ paradigm begins to infiltrate new parts of our daily life.

Here are a few views of how work will look in the future.

Trains and planes have long been staples of remote work, but working from our own vehicles hasn’t been a reality – yet. As we inch closer to mainstream autonomous cars, the cockpit office will become a common part of a typical work environment. Dr. Paul Root Wolpe, a professor of bioethics at The Emory University Center for Ethics believes there will be more elaborate and sophisticated situations for working in cars, and we’re not that far off. “When people travel, they don’t have work stations – you can work on a plane or a train, but can’t really connect, and you can disturb people around you,” said Dr. Wolpe.

“What happens when you have automatic cars? You can set up shop because you won’t be driving. You can set up a whole work station in the back seat. It’s not much different than sitting in your office.”

A recent Pew Research study found that 56 percent of Americans expect cars to be driverless within the next 50 years, with 40 percent indicating that they’re optimistic about the development of driverless vehicles. And we’re already seeing people set up shop without the automated driving capabilities. For example, Volvo has proposed a rear seat workstation configuration with a foldout workstation that incorporates a desk and a touch-screen ‘infotainment’ system; Volkswagen subsidiary MOIA, a ridesharing service, is dedicated to making commuting feel luxurious and productive with convenience features, which include dimmable reading lights, USB ports and WiFi for on-the-go workers. We’re moving beyond make-shift solutions – such as using power inverters to run computers and communications devices off of the car's battery – to innovative features that bring the comfort of working in an office to the car.

With average commute time clocking in at 38 minutes each way, workers are spending approximately 300 hours a year commuting to and from their jobs. To boot, a Social Science Research Network study found that the attitude we adopt during our commutes, and the thought patterns we engage in while we’re in transit, play a role in how satisfied and productive we are at our jobs. So, not only is working in the comfort of our cars good for the few hours we spend in the car each day, but the effects last far longer.

What do video games and jobs have in common? They can bring people together from different physical locations to accomplish something. Beyond Skype and FaceTime, VR is seemingly the perfect unifier for remote workers or satellite offices employees because it enhances the belief that they’re in another real environment.

Why is this important? Great ideas often come from serendipitous encounters. One of the big problems with remote work is the loss of serendipity – seeing a colleague in the hallway and discussing an idea when you were on the way to do something completely different. We’re more likely to spark ideas with face to face interaction – even if it’s virtual.

Workplace expert and best-selling author, Alexandra Levit is a believer that VR is an integral part of the future of work – especially in industries like HR. “Using virtual reality, HR staff and managers will be able to create simulations that mimic real-world scenarios – making individual skill acquisition in different functions and geographies easier than ever,” she said. “For instance, if you need to onboard a group of employees who must be proficient doing business in Japan, you might ‘send’ them to a virtual Japanese office to interact with and learn from Japanese colleagues.”

Companies on the forefront of innovation, like Pixar and Google, have redesigned entire offices to bring formerly separated departments together to encourage creative problem solving, idea-sharing and experiences. Through VR, companies don’t need a Google or Pixar budget or infrastructure change to bring this type of engagement to their employees – whether they work from the office or from home.

The face of work is prime for a seismic shift, and although working in transit and using VR to (virtually) bring employees back to the office isn’t going to happen overnight, it’s already starting to change the way we get things done. The technology is there: now it’s just a matter of whether organizations are ready to change the way they work.