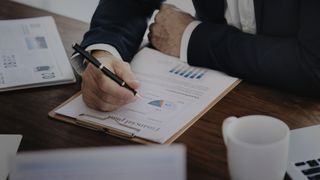 The UK’s technology sector is one of the country’s fastest growing industries, with investors from around the world looking for a stake in the UK tech scene. Since 2011, the UK has brought in £28 billion worth of investment, compared to just £11bn in France and £9.3bn in Germany.

This investment has now led to the sector becoming a major contributor towards the UK economy, adding around £97bn per year – rising 30% in the past five years. The sector’s growth is also around twice that of the wider UK economy.

Yet despite substantial growth within the sector, there are still some areas lacking innovation. While many UK businesses have been at the forefront of technology developments, such as Graphene, along with developments in cyber security, it is shocking to see that some are still relying on paper-based processes to operate. Our recent ‘Death of the paper trail’ report found that the IT sector is one of the industry’s most reliant on paper, with 59% of employees admitting they still rely heavily on the material.

What is causing the IT sector to rely on paper?

Despite technology rapidly advancing, with today’s offices being filled with modern computers and servers, staff appear to be relying on traditional office hardware, such as printers, during their day-to-day jobs. In fact, 41% of employees within the IT sector are printing off documents every other day, and almost a fifth (17%) printing out documents on a daily basis. Alongside the printer, the fax machine also still remains popular in the 21st century, with over a third (38%) still using this on a regular basis.

But, perhaps most surprising to find within a sector that is renowned for its innovation is the fact that 55% of workers would like their bosses to invest in email, suggesting that a large number of businesses have not yet introduced this most basic form of technology – despite it being available for well over two decades.

Why is relying on paper an issue?

Each year, the production of commodities like paper, means that seven million hectares of rain forest are lost– an area equivalent to almost the size of Scotland. And as 50% of all waste from businesses is paper-based, it is clear that the environment is paying the price for a continued reliance on paper. Businesses need to do more to reduce their usage and protect the planet.

However, environmental issues are not the only consequence of being too dependent on paper. Businesses could also find themselves facing a range of legal and compliancy issues. In fact, our research highlighted that over one in ten (12%) organisations have seen important documents misplaced or lost, which has then gone on to result in a series of compliancy and legal issues. This could be anything from a contract going astray, to a client order form being misplaced.

With employees in the IT sector continuing to print off documents, it is now creating a costly bill for businesses. On average, a business could be wasting at least £2,000 per employee each year. Putting this into context, if a company employs 50 people or more, they are looking at a potential bill of at least £100,000 per year.

What can the sector do to reduce its reliance on paper?

As those within the technology sector will be aware, the need to use paper is becoming redundant thanks to technological developments.

Advancements in mobile and hand-held technologies, along with user interface and loading speed improvements to the Internet, have turned traditional communication methods digital. Sending physical mail has been replaced by email and text messaging, along with the telephone and video messaging services reducing the need for face-to-face communication.

Further innovations, including digital data capture solutions, have also been developed to allow paper-based forms to be digitised and stored in the cloud.

One of the biggest drawbacks with paper is it can be lost easily but can also be damaged too. But, by digitising paper documents, important files and information can be safeguarded against damage or being misplaced. And because digital documents are stored in the cloud, users can access the documents anywhere, at any time, from a mobile device.

Digital documents also enable businesses to keep a more effective digital audit trail. If an important paper document was to go astray, this could then result in the business being heavily fined. Although, with digital documents, because they are all be stored and backed up online, it is very difficult for documents to be misplaced or lost - meaning business owners and IT managers can be reassured that they won’t face financial penalties.

But, alongside ensuring IT firms are operating compliantly, digital solutions also have great cost saving benefits over their paper counterparts by removing the need for businesses to purchase printing materials, such as ink and paper. The money that is then saved can then be invested into more important initiatives, such as in staff training, cyber security or improving equipment around the office.

With the UK’s tech and IT sectors growing faster than any other tech sector inside Europe, it would be expected for businesses at the forefront of innovation to be operating fully digitally, but this doesn’t appear to be the case. Businesses and employees are still relying heavily on paper-based forms to operate on a day-to-day basis, and it is leaving companies facing a range of compliancy issues, along with possible monetary losses. A more reliable solution is needed to help businesses operate more sustainably. Embracing digital data capture, along with mobile technologies, are but two ways that the sector could cut paper usage and ensure it is working towards a more sustainable future.