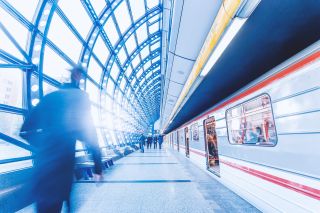 When I first heard Boris Johnson’s edict that we “return to work” and “avoid public transport”, I might have laughed out loud, were it not such a serious matter.

For many UK workers, public transport is not something that can be easily avoided.  Nearly 20 per cent of people use it for their daily commute, and almost half of households in the lowest income bracket have no access to a car.  If you are lucky enough to be able to drive, the cumulative effect of thousands of returning co-workers clogging up the roads is likely to make you wish you’d sprung for those leather seats.  During ‘unlockdown’, it’s going to be difficult to get anywhere in a hurry.  This is partly the reason behind the government’s renewed focus on encouraging ‘active travel’ such as walking and cycling.  While this may be feasible for some, the average UK commute is a twenty-mile round-trip, which could be a step too far for many.  For those with shorter commutes, there is still the essential question of how to procure a bike in the first place, with an estimated 20,000 bicycles currently on back-order and many stores currently out of stock.

For all these reasons, as each day passes, a growing number of people will be grimly making their way to their local train station or bus stop. Which is where the problems will start.

Firstly, the UK’s public transport operators are not remotely prepared for this.    The sector has less vehicles in active service today than at any time in its history.  Tens of thousands of buses, minibuses and coaches lie dormant.  Thousands of drivers are redundant or furloughed.  The UK’s trains are running on an emergency reduced schedule - and we all know what happened last time they tried to change the timetables in a hurry.  Even TfL, the nation’s largest transport authority, has 42 of its stations closed and 7,000 staff laid off at the time of writing.

The fact is that the few vehicles we do have in service will barely scratch the surface of demand.  And that’s before one factors in the need to impose social distancing.  Given a 2-metre rule, it’s estimated that the average double decker will hold just fifteen people.  For a single decker, that’s reduced down to five.  As Grant Schapps noted this week, vehicles are running at around 10 per cent capacity.

So, what will be the outcome of this unexpected surge in demand coupled with the huge drop in supply? To put it simply – huge queues. A two-metre social distance, for a queue of one hundred people, creates a queue of two hundred-metres.   At rush hour, we are talking not hundreds but thousands of people, so queues could extend for miles.  This is not only impractical it’s also unsafe, and could lead to crowd control issues, further risking Covid-19 exposure not only to passengers but also drivers, themselves already at significant risk.

But there is hope amidst all this talk of queue-mageddon, because a technical solution exists that will reduce queuing, make transportation safer and still provide for social distancing.

Public transport should be made pre-bookable.

Over time, such systems can be extended to deal with more complex requirements.  A staff app to validate tickets.  Priority booking for passengers with an NHS email address.  At UrbanThings, we’ve even worked with the DfT to develop a national standard for Bluetooth beacons that detect when passengers get off.  This permits additional stops en-route and could allow spare capacity to be re-booked on the fly.  There even exists the opportunity to plug such a system into the emergent NHSX contact-tracing framework, augmenting the data with metrics on potential exposure in the close confines of a bus or train carriage

Digital queuing is a tried and tested approach to dealing with situations where demand outstrips supply.  It works for ticketing websites, post-office counters, even the deli counter at the supermarket.  And, used correctly, it presents an ideal short-term solution for the management of crowded buses, trams or trains.

Here’s how the solution would work.  Cities must convert a proportion of their fixed-route bus services into pre-booked, point-to-point shuttle services.  Passengers book and pay for their trip via an app, but bookings are strictly time-limited to manage capacity and enforce social distancing.  If exact timed trips cannot be guaranteed, then time-banded slots can be booked, rather like giving out coloured bands to users of a swimming pool.  A centralised platform monitors the bookings and ensures capacity constraints are met on each trip.

The benefits are numerous.  For passengers, there’s no need to queue - they have a guaranteed and safe means to get to work.  For operators, the ability to ensure their services meet demand, and use their capacity as efficiently as possible.  For society as a whole, a safer environment with enforcement of social distancing.

The technology to convert a ‘hop on’ service to a pre-booked system not only exists but is surprisingly quick and simple to deploy.  Many technology providers, ours included, can supply such a platform with a minimum of cost and fuss.  Average deployment time is measured in days, not weeks.

For others who work in the intelligent mobility sector, this type of solution will sound familiar.  It’s essentially a component of what is known as a “Demand-Responsive Transport” platform, albeit a next-generation approach.  The example described for use on buses is just the beginning.  A true DRT platform can do much more -- if overloaded bus fleets can’t meet capacity, other transport modes can be called upon to meet passenger demand in real time; minibuses, taxis, even private cars.  Over time, with ticketing and payment integration, the platform ultimately evolves into a “Mobility-as-a-Service” (MaaS) solution, offering a wide choice of safe and convenient travel options to passengers.

In conclusion, it’s easy for politicians to announce a return-to-work while avoiding the trickier question of how public transport can be safely regulated.  But there are solutions to this, and the real winners will be the cities that embrace these quickly and effectively.  The challenges of today may even present a golden opportunity to take our mobility infrastructure to the next level.