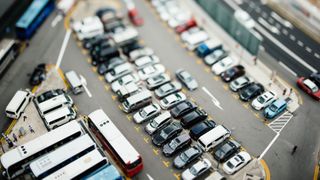 The sharing economy is on course to be worth $335bn by 2025, as consumers take on an Airbnb mindset and realise they have thousands of pounds worth of assets just sitting in a loft or parked on a drive waiting to be hired out.

And it is an idea that is gaining traction with car drivers. By 2024 Global Market Insights estimates the P2P car sharing market will be worth $11bn. This rapid growth is being put down to consumers railing against the rising cost of car ownership, estimated by the AA to be approaching £10,000 per year for a family saloon.

Rather than watch a valuable asset sit idle, individuals can now rent their vehicle to another driver, so the cost of ownership is shared and the hirer gets a better deal than they would from a hire car company. By connecting motorists together, modern digital platforms can enable one car to meet the driving requirements of several motorists. The potential savings are huge.

P2P car sharing is not just a pipedream, or the brainchild of a start-up on KickStarter. It is a growing reality as more vehicle manufacturers get on board, such as the launch of the Maven P2P car sharing platform by General Motors.

But as with many new opportunities, it comes with risks…..

What are the risks?

As with any P2P lending system, trust must underpin every arrangement. The owner needs to know the hirer is who they say they are, and that they have the funds to cover the hiring period. They will also likely want to track how and where the vehicle is being driven. Anyone hiring a car will need assurance that they are paying the true owner of the car and that the data exchange between the two parties is processed securely.

This means drivers need to be connected with one another as well as the cars they are driving and loaning. The prevalence of connected cars is therefore fuelling the growth of P2P lending. By 2020 Gartner estimates that as many as 300 million cars and lorries will have smart data capabilities embedded when they are made, or added later through upgrades. This is starting to build up a market for car data that McKinsey has estimated will be worth a staggering $750bn by 2030.

But with so much personal data required to set up the loan, process a payment and then give visibility about how and where it is being driven, there are multiple new security challenges.

While many technologists are asking what are the opportunities of the sharing economy and what it means for car ownership and P2P lending, it is only right that information security experts are pondering how this new market can be supported.

Connected cars bring with them the new threat of hacking. Rather than steal information, a cybercriminal could wreak havoc on the roads by gaining access to a connected car. A well-known Wired article has already shown how this may be possible, allowing a hacker to worryingly take control of braking, acceleration and steering. And with financial and location information being transferred through P2P lending schemes, the possibility of hacking in to their control systems will become a challenge that bad actors will be tempted to take on.

Whether it is a prank of trying to cause a car to brake suddenly or payment fraud, it is clear there is soon to be a new, very clear and present danger.

How do we keep it safe?

The P2P car sharing economy is growing as the digital world becomes used to working with cryptocurrencies. Though some consumers may see the new forms of digital money as a confusing trend, cryptocurrency could prove far safer than conventional payment methods.

The beauty of a cryptocurrency is that it is based on the application of blockchain technology, providing a distributed ledger of who owns how many credits or ‘coins’. This means there is never just one copy of a balance. Instead multiple records, when combined, verifies a person has the required balance and can then record the transfer of funds to the car owner.

This distribution of data across the net makes cryptocurrencies significantly less likely to be stolen than cash in a wallet and far harder to hack than a credit card.

The same blockchain technology could also help keep data safe. The car owner, by the very nature of blockchain, would have full control over who gets access to his or her information, and the same goes for the person borrowing the vehicle. Without a key to piece together the distributed data and then decrypt it, it is far harder for a third party to hack either side’s personal information.

Again, using the example of hijacking a car, blockchain can make it much harder for a hacker to gain control, because it is only by being given a digital ‘key’ to access the vehicle’s systems that an outsider could take control of it. If this key is distributed around the internet, and accessible only with its owner’s permission, it is immeasurably harder to hack than a cybercriminal being faced with only hacking their way into a single server.

Blockchain is not only there to protect people lending out and hiring cars from hackers – it could also be a facilitator to allow a fair exchange of data. Companies are expected to see driver data as holding considerable value because it reveals the how, when, where and why of our motoring habits. It could be used in marketing for our next car, or simply point us to the nearest service station, hotel or restaurant.

If this data is being protected by blockchain, by distributing it around the net, it follows that the cryptocurrency technology used to hire the car could also be used to pass over this personal driver data. Motorists could share their information and, in return, receive cryptocurrency tokens.

Although the new trend in P2P car sharing raises several major questions around data processing and security, these issues are coinciding with the rise of cryptocurrencies and the blockchain technology that powers them.

A distributed ledger approach gives both sides of the agreement far more control over who can access their data, it can also operate as the backbone of the cryptocurrency used to pay for the vehicle hire. It can even ensure any data that is shared willingly with a third party is done so securely and at a fair market value, paid for in cryptocurrency tokens.

P2P car sharing raises many questions, then, but it is doing so at the very time that blockchain technology is providing the answers.