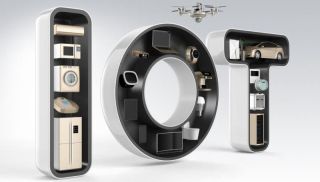 Ady Moores, CEO of P2i, on advances in water resistant nano coatings and their role in an Internet of Things (IoT) enabled future.

In October vice president & Gartner Fellow Daryl Plummer predicted that by 2020, Internet of Things (IoT) technology will be in 95% of electronics for new product designs. That means that pretty much all electronics in the future will be connected to the internet. Gartner also predicted that there will be 20.4 billion IoT devices in operation by 2020, making for a very connected world.

From every-day consumer goods, to automated robotics and sensors, the IoT will underpin every aspect of our society. Devices will be smarter too, acting as networking nodes rather than just terminals. Communicating with and reacting to other IoT devices and the environment, they will provide better services and ways of working for all.

For this vision of the future to be realised though, networking resilience will need to be improved massively to enable continuous uptime and minimise maintenance, in turn creating an ‘always on’ digital ecosystem. Faster and smarter communication networks are essential to this, and 5G’s imminent deployment will go a long way towards facilitating this.

Reliable networking undermined by the devices they connect

Unfortunately, it does not matter how good the network is if the devices that connect to it are easily damaged and unable to transmit data, or transmit data that is inaccurate.

Many IoT devices will be a link in the chain, so the failure of a single device can have greater consequences. For the IoT to be effective, it is essential that data collected from each node feeds into and flows through the network as a whole.

One of the main factors that affects the performance and connectivity of electronics in any environment is humidity. The problem can be particularly acute for those sensors and devices deployed in external environments.

To combat this problem manufacturers are now turning to multi-chemistry hydrophobic nano coating solutions to maintain device reliability and uptime across the entire IoT landscape.

For both industrial grade and consumer electronics that make up IoT networks, nano coating technology is adding significant value and reliability. Whether it is a 5G ready mobile device, a connected traffic light, or a sensor in a farmer’s field, hydrophobic nano coatings protect against both accidental damage and also the elements to ensure continuous connectivity throughout the lifetime of any type of device.

Nano coating differs from more traditional waterproofing solutions, in which physical seals are built into devices to stop water ingress. They are applied through a low pressure pulsed plasma deposition process that covers devices inside and out, with a nano scale monomer chemically bonded to the surface.

It can be applied at the end of a production cycle, but increasingly manufacturers are integrating it at multiple stages of the production process, with multi-layered nano coatings providing advanced hydrophobic qualities to expensive electronics, or devices where minimal maintenance is needed to ensure cost effectiveness. Nano coating also enables greater design freedom than physical gaskets and seals.

Many IoT devices deployed outside and in extreme weather conditions will of course have ruggedised features but adding a hydrophobic nano coating means that if a physical barrier is ever compromised – and the failure rates are surprisingly high – they are protected against corrosion and will continue to operate at maximum efficiency no matter what.

But where are some of the sectors we are likely to see this kind of technology deployed first? It is already prevalent in the design of consumer technology such as smartphones and Bluetooth headsets, but will increasingly be used elsewhere across the connected landscape…

Agriculture – Population growth is increasing pressure on resources, meaning better analytics, automation and greater production capabilities are needed in farming and agriculture. Crop sensors, drones and the like are constantly exposed to the elements, so if not properly protected gradual corrosion can short-circuit autonomous equipment. This could lead to crop failure or the death of livestock.

Automotive – As connected vehicles, and eventually autonomous ones take over the road, the reliability and performance of an array of sensors under the hood will be ultra-important in keeping road users safe. Exposed to the wet environments, heat from the engine, and vibrations from the road, physical barriers will not always be enough to keep them fully operational. Multi-chemistry nano coating solutions are a credible solution to reliability issues, protecting against all liquids, not just water – particularly important in the automotive industry where grease, oil and dirt are ever-present.

Smart cities – By 2050, it is predicted that 70% of the world’s population will be living in urban areas. At the current rate of innovation and IoT deployments, data will be the lifeblood of these vast interconnected cityscapes of the future. If we believe this to be a realistic vision of the future, then we must also consider typical weather patterns in 30 years’ time. The effects of global warming around the world will be felt differently, but Northern Europe is likely to experience warmer winters and more rain, with an ever increasing number of cloudbursts. Storms will become even more powerful and sea levels will continue to rise.

The threat to IoT technology from the elements is very likely to increase, and as hydrophobic coatings evolve, they will provide increased protection for the electronics that underpin the cities of the future. Alphabet is redeveloping 12 acres of South Eastern waterfront in Toronto, building the smart city from ‘the ground up’. But if they are going to build tomorrow’s world in Toronto, then they must consider the long term impact of weather on the digital infrastructure of the city.