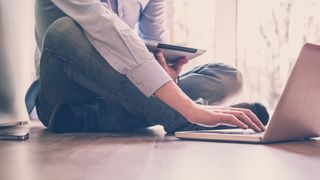 The Covid-19 crisis has seen more than half of all British businesses[1] turn to remote working in order to maintain business continuity, and this number is likely only to rise as the nationwide lockdown continues. This transition is causing businesses a swathe of logistical, technical, and personnel challenges.

Mass remote working is also causing a variety of difficulties for remote workers themselves, with many issues stemming from a reduction in social contact. Humans are social animals, and as such, many of us find that our mental wellbeing is closely tied to feelings of community and purpose. The office normally provides a place for many of us to experience these feelings, and work as part of a wider team.

Community in the workplace

With offices widely closed and workers operating from home, the danger is that this mass shift to remote working could lead to people feeling isolated. Indeed, some experts fear that the lockdown may serve as a “perfect storm”[2] for widespread mental health problems. It shouldn’t be underestimated how much communication happens in an office, beyond just conversations. Small gestures or body language, changes in tone and a passing smile build up to create an environment that is extremely difficult to recreate remotely.

This is especially true of acknowledgement. As part of our social nature, humans thrive off positive interactions, and we derive a great deal of satisfaction and motivation from the opinions of peers. One major problem of remote working is that much of the recognition that we give and receive on a daily basis in the office is relatively minor and unplanned. When operating in separate houses, cities or even countries, there is a subconscious tendency to scale back on the feedback we give. Congratulating and thanking each other is a community activity, and without a community, it is often the first casualty.

Why recognition matters for motivation

With these workers feeling alone and isolated from their teams, there’s a corresponding risk of a dramatic drop-off in motivation and productivity. So, how can organisations make moves to mitigate this risk among their now-remote workforces?

Rather than just more money, recognition is one of the core drivers of employee motivation. Last year, a study by Businessolver[3] found that 82 per cent of employees would consider leaving their current organisation for a more empathetic one. In fact, the study shows that more expressive and empathic employers were in a more favourable position with their employees - 78 per cent of employees stated they would work longer hours for a more empathetic employer, and 60 per cent would be content to take slightly less pay.

The stark difference made by recognition can be seen in practice, too. The Global Happiness Council[4] has found that a meaningful increase in well-being, which can be driven by workplace recognition, can yield an average increase in productivity of roughly 10 per cent. The negative effects of a lack of recognition are equally as palpable, with nearly 8 out of every 10[5] employees who quit their jobs citing their main reason as feeling unappreciated.

This is a profound problem for a mass transition to remote working, because many organisations' and employee’s approach to recognition is an uncodified one. The shift to remote working has stripped away the methods these organisations have historically depended on for recognition. Even at very successful businesses, recognition is often conducted on a spontaneous basis, with all the irregularities and implicit biases that entails. For example, extroverts receive more praise[6] on average relative to their achievements than introverts, simply because they communicate more. But when working remotely, anyone, no matter how extroverted, can end up feeling like they’re doing nothing but interacting with their computer all day, instead of working with and being recognised by their bosses and peers.

The key to providing remote recognition is to build codified and systemised recognition processes. Different organisations have different approaches to the systems they create - some create gamified recognition experiences, others create point-based systems, and others encourage constant written input between team members in response to contributions.

For such processes to work, they have to be understandable, meaningful, and have employee buy-in. Understandable, so that your team members can appreciate the suggestions or directions given by any suggestions they receive; meaningful, to elicit an emotional reaction and thus provide genuine motivation for teams; and have buy-in, so that all members of management and peers share as much input among each other as is possible.

The buy-in aspect of systemising recognition is the most challenging. Top-down direction is essential, but no company-wide system will survive on management say-so alone; it must be developed in conjunction with team members at every level. As with introducing any company-wide policy or process, if it doesn’t work for those using it on a daily basis then it won’t work as a whole.

The aim of every business should be to create and foster a culture of collaboration and recognition, no matter where your employees are located. Recognition doesn’t have to be in response to a major project, or even in response to anything at all - celebrating the little wins is key to building a team that values each other’s contributions and works together effectively.

Remote working is presenting a unique challenge to businesses across the world, and could lead to a surge of disillusioned employees looking for new jobs once the crisis abates. Making your employees feel like a valued and recognised part of the team will help keep motivation up and aid both staff retention and productivity.