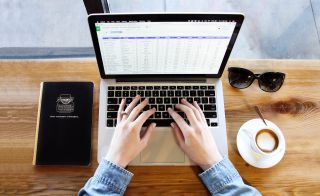 Imagine, for a minute, if spreadsheet users had a magic wand, what would they wish for? Automatic mistake corrections for formulas? Sharing only certain parts of the spreadsheet? Tracked changes perhaps? Virtually everybody uses spreadsheets which can lead to data leakage, undetected errors and often bad business decisions.

Up until the past few years, there was really no alternative to Excel. If you wanted to crunch numbers, keep financial records, and manage your corporate finances and risk analysis, Excel was the only tool at your disposal.

But it’s no secret that traditional spreadsheets leave a lot to be desired when it comes to modern business use. Several studies have found that up to 90 percent of spreadsheets contain errors. From copy and paste errors to hidden cells and miscalculations, it is almost worth assuming that you've encountered or created an Excel error at some point. And you’re by no means alone. Two Harvard professors, Carmen Reinhart and Kenneth Rogoff, who published a hugely influential 2010 report into debt and the impact on economic growth. In the aftermath of the recession, governments around the world took this extremely seriously, pushing forward economic policies that have caused years of austerity and harsh social policies. Only in the last few years have other researchers debunked the research, highlighting the fact that they were missing some key pieces of data in the spreadsheets.

Data security has of course been a hot topic in the news of late, thanks to the recent GDPR laws coming into force in Europe in May of this year. But questions and complaints over the drawbacks of traditional spreadsheets go back years – there is a European Spreadsheet Risk Interest Group - a spreadsheet risk management conference and working group, that has been running over fifteen years.

So, in today’s age of AI it stands to reason that machine learning could offer the answers we’ve been looking for when it comes to our spreadsheet prayers.

Many of the big players in the software industry think so. Microsoft announced earlier this year that it would be adding some AI features to Excel. Google Sheets boasted AI capabilities before that, with auto-suggest for formulas and one-click visual representations of data. But, is AI the future, the magic wand spreadsheet users need, and does it have the power to influence productivity?

In theory, intelligence-based features promise huge gains for the future of productivity. Yet in reality, as any professional dealing with spreadsheet-based analysis and decision making on a daily basis will tell you, modelling, analysing and presenting a business case is an art as much as a science.That’s the reason management consultants are in business: because it’s not an easy craft to master. We have to ask, do we want to make assumptions, for every projection period, on how many customers we will attract and the price they will pay? Or are we more comfortable setting an initial revenue figure and making assumptions on an annual growth rate instead?

The good news is there is another way to improve standard spreadsheets. Automation – without the need of AI – can help suggesting the most common options a trained professional would consider. This still requires an interaction with a chatbot asking contextual questions based on the previous answers. Yet, it removes error probability as it delegates to a machine the task of writing formulae in a spreadsheet based on the answers a human provides.

However, wouldn’t it be nice if you could just tell the spreadsheet that you have a start-up in the energy sector, for example, and have the model laid out for you? Is this possible with the help of AI? Unfortunately, no. At least, you could try to dream up a perfectly tailored model if the AI could read your mind! But even a human can’t do this – it takes a lot of fine tuning because even a top consultant cannot come up with a completely perfect model for you without conversations requiring consciousness.

What’s more, an extensively trained machine learning algorithm powering a spreadsheet will still require more information for a proper model layout, for example, the size of the company, what type of products or services it offers, and so on. This poses another question, which is: how is the AI trained? What data do we feed into it? All the spreadsheets in the world? Only the ones in your company? The list is endless.

AI may help with layout structure and assumptions, ‘suggesting’ what the next items to model are and how you should model them. For instance, instead of asking the deterministic bot question: “Do you want to model revenues as number of users times price, or as initial revenues plus a growth rate?”, it would say: “Most of the companies in your industry and of your size have these revenue streams and cost structure – are you ok with that or shall I suggest more?” But this is really no better than an ecommerce site suggesting which books you should buy based on what others are ‘similar’ to ones you have previously bought.

On the plus side, AI may detect anomalies and warn of potential errors. If problems can be solved with imperative algorithms, they are better and faster than AI. AI is suitable for problems that machines cannot be instructed to solve deterministically, like understanding whether they are shown an orange or an apple, a cat or a dog.

There are some gains to be had of course. For most businesses, AI can at least help with workflow, suggesting who should have what permission levels based on past actions and assigned projects. But, could the use of AI in spreadsheets help businesses make better decisions? Only if it could be trained to human-level understanding, ethics, business sense and awareness, which cannot be programmed.