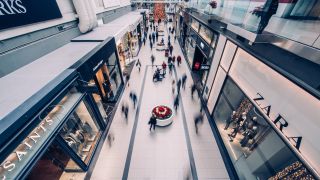 Technology that reduces or eliminates customer queues at checkouts has become a major talking point in physical retail. Recent research has highlighted that the overwhelming majority of retail customers believe that payment technology will make their shopping lives easier when they cross the threshold of a store.

Of 1,000 UK consumers surveyed for research by Hughes, 76 per cent said that they want to see retailers install payment technology and another 60 per cent said it should be implemented in stores right away. Clearly, the irritation that customers now feel when confronted by a queue is beginning to cloud their view of in-store retail and their perception of physical retailers.

Now accustomed to the ease of the online shopping experience where items can be ordered with one click and delivery options are becoming increasingly rapid, customers no longer feel obliged to stand in line in a store for more than the shortest amount of time.

Last year a study published by University College London calculated that six minutes was the maximum amount of time that the average customer was prepared to wait in a queue, but that may be an optimistic measurement. In many convenience store settings, patience will be shorter and expectations of rapid service much higher as customers are becoming increasingly used to the instant gratification provided by the online shopping experience.

Today’s customers see how payments tech will wipe out queuing

One of the areas where customers can see technology making a big difference to their store experience is in facilitating payments that no longer require them to wait in line. After taking the time to decide what to buy, today’s customers do not see any need to dedicate any more of their time to standing in line simply to pay before they can leave.

The research shows the huge level of expectation among customers accustomed to contactless or smartphone-based in store payment systems. In the research, 88 per cent of respondents said they expect to see more portable payment technology in stores, with 65 per cent expecting to see it up and running in stores within the next 12 months. For retailers this essentially means enabling customers to pay via tablets or other connected portable payment devices held by staff who can move around the store.

Similarly, 85 per cent of customers expect to be able to pay with their own smart phones in store at some point, and 88 per cent believe they will see scan-and-go technology implemented by retailers. In each case, substantially more than 60 per cent believe these technologies will be available in stores within the next 12 months.

Smartphone payment systems such as Apple Pay and Samsung Pay are increasingly well-established among younger consumers, especially, while scan and go technology is seen as the future for convenience and grocery retailers. Using apps on their phones, customers can scan and pay for their goods with their own devices and no longer have to queue at the checkout while their purchases are validated. This is a big advance on using the retailer’s own scanning devices, saving them the investment and as an added bonus, retailers will win valued back time and precious store floorspace.

Retailers need to focus on the delivery of payment applications

Large percentages of the retailers surveyed for the same research said that they could see the benefit of introducing the innovations that consumers clearly want. Nearly nine-in-ten (88 per cent) of the 100 retailers (all with more than 250 employees) for example, believe it important that they invest in queue-busting technologies.

Yet most (69 per cent) of retailers said that their plans to invest in queue-busting technologies would come to fruition in the next three years, compared with 15 per cent of retailers who plan to put money into them immediately.

This may reflect a certain lack of urgency among retailers compared with the expectations of customers, but it is worth remembering that meeting customer expectations by speeding up payments is about more than the front-end application. The IT infrastructure behind these technologies needs to be fully capable of bearing the load that such applications place on a network – especially one that has been built up over time, often through various acquisitions.

Data from payment and scanning technologies has to travel over the internet or Wi-Fi on connectivity for which the retailer is responsible, and it must ensure that this takes place securely. Reputationally, it will be pretty disastrous if customers come into a store expecting to use payment or self-scan applications but find them hopelessly slow or unusable. Worse still would be the potential fallout if a retailer’s network was found to be unsecure, especially in an age where cyber security stories regularly make headline news and customers become increasingly wary as a result.

Fortunately, the majority of retailers surveyed by Hughes understand the need for investment in connectivity infrastructure as a precursor to implementing the applications. Seven-out-of-ten retailers (70 per cent) said that their network security needed to be addressed within 12 months, and 65 per cent took the same view of investment to ensure guaranteed network availability across their infrastructure. A further 65 per cent of retailers said that they could see the importance of both giving attention to bandwidth capacity and to the means by which they would actually manage the way their new applications use the network.

Striking the right balance between application and infrastructure

In retail, as in life, there is a balance to be struck. In the context of enabling queue-busting payment technologies it is important for retailers with multiple branches to consider carefully where they should strike the balance between investing in the applications that customers want and the network connectivity without which those applications cannot function.

Customer expectations are racing ahead and there is a danger that without a clear focus on the connectivity, retailers will start to lose out to competitors who have already implemented the right kind of robust, properly managed infrastructure that fully optimises queue-busting payment applications.