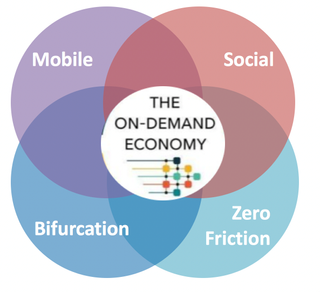 As an entrepreneur who has moved from the e-commerce world (products going digital) to the on-demand world (services going digital), I believe the ODE has a shot at being as big if not substantially bigger than e-commerce.  To understand why I’m so optimistic about the ODE, let’s look at four consumer behaviours that are driving the rapid adoption of the industry.

Ask any retailer or brand manufacturer and they will tell you that consumer behaviour has changed more in the last 5 years than it did in the 150 years prior.  For me, the ODE sits squarely at the intersection of four of the largest consumer behaviour changes:

For example, imagine after the zero-friction Starbucks mobile order+pay experience that you are now in Walmart and there are 200 people checking out and 3 registers open.  Suddenly that experience is 100x worse now because I’ve readjusted my expectations thanks to the Starbucks app, Uber, self-service checkout, 2-day Prime shipping, same day Prime Now shipping, etc..  The punch line of zero friction is that if you are a business and aren’t spending a large chunk of your time figuring out how to make a zero friction consumer experience, you can bet your competition IS and you may find yourself facing an existential crisis very quickly.  It took Starbucks customers less than a year with mobile order+pay to get north of 20 per cent and cause them to start thinking about completely retooling their stores to handle the surge.

Conversely if you can give them a disruptively and innovatively low or zero friction option, you will win their hearts and minds.   Instead of DIY (Do It Yourself), give them DIFM (Do It For Me).  Give them an app and communicate with them that way (or text).  Give them flexibility and transparency. Put the control of the transaction in their hands vs yours.

For me, any company that fits in that realm, is part of an already large ODE space and over time this space should be 4X as big as e-commerce because when you look at US GDP, Goods are 20 per cent and services are 80 per cent.

Where is ODE in the ‘hype cycle’?

With that background on the ODE, you would think I’m about to show you a chart that is up and to the right at a greater than 45 degree slope right?  Not so fast.  It turns out that new disruptive technologies or what I prefer to call ‘Waves of Innovation’ go through a pretty well known adoption lifecycle that Gartner calls the hype cycle and is illustrated here:

Even in the modern age when you have platforms like FB growing much faster than anything before, we still go through the hype cycle, but in 5-10yrs vs. the previous 20-40yrs (Microwaves for example).  I remember camping out for my iPhone 1, literally overnight.  I opened it, got it setup and then after a couple of days realised that all it was was a phone/ipod and camera in one device vs. the 3 I had before.  It was cool, but you couldn’t really do anything ‘new’ with it.  Then a year later the app store came out.  Boom, it was off to the races.  When a new technology is past that initial excitement with early adopters, but has lost a bit of its lustre, that’s what Gartner calls (are you sitting down) the trough of disillusionment!

With that quick tour of the hype cycle behind us, let’s look at where the ODE space is at.  Analyst firm CB Insights publishes a quarterly review of funding for on-demand startup companies and in February released their Q4 2016 report which is best summarised with this graphic:

Does this look familiar to you?  What we are seeing is that the ODE space is clearly in the trough of disillusionment.  In fact if we took the big three transportation companies out (Uber, Lyft and China’s Didi Chuxing), it would be even more pronounced.

What’s happening is outside of transportation a lot of companies were founded like Homejoy, Luxe, Instacart, Postmates, YourMechanic, Handy, etc. that have fallen into three buckets:

How does ODE get out of the ‘trough of disillusionment?

I believe the number one thing that many of the failed and potentially failing ODE companies suffer from is that they put the financial model in front of the consumer experience.  Homejoy is a great example:

For ODE to make it out of Gartner’s Trough of Disillusionment through the Slope of Enlightenment to the Plateau of Productivity (mainstream adoption), companies have to focus on creating great customer experiences and constantly challenge themselves:

The final point I want to re-iterate that is even broader than the ODE: if you don’t provide an amazing zero friction experience, someone else will and the way these platforms work, your customers are a click, app-install, tap or swipe away from switching.