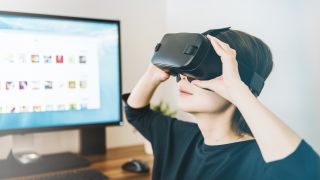 Since the inception of Virtual Reality and Augmented Reality apps (AR/VR), both the technologies have redefined almost every sector whether it is IT, entertainment, healthcare, or defence.

“Virtual reality technology was once the dream of science fiction but the internet was also once just a dream and so were the computers and smartphones.” – Mark Zuckerberg

Virtual and Augmented Reality apps have worked as the establishment or for laying the first step into a future, which is much like a grand adventure.

Movies like Total Recall (1990), Star wars, Star Trek (1966), and Minority Report (2002) gave a glimpse of the possible future technologies to the viewers and the world. Thus, making them question themselves whether it is possible to have all these technologies in our hands or not. Will this become a reality?

Since the continuous innovations by the human brain and rise of the technologies since the calculator to the smartphones, all these questions started getting answers. With the first release of the Virtual Reality Vive in April 2016 by the Valve Corporation and the PlayStation VR for gaming in October 2016, it totally began to change the game.

The foundation of Virtual Reality technology was laid back in 1960’s. It saw many drastic changes but finally in the initial development phase as a commercial headset later in 2010. Finally showcased by the Valve Corporation in 2014 leading to a business tie-up with HTC and the rest is history.

The present day Virtual Reality technology uses the headsets and the multiple-projected environments also combined with props and environments to generate realistic audio and visual effects, also the other sensations. Simulations which simulate a user’s physical presence in a total imaginary or a virtual environment. It makes it possible for a person to look around in the artificial world and also communicate with the features.

VR systems work on the transmission of the vibrations and the other sensations through the user using sensors and game controllers. Providing force feedback in the medical, military training applications, and most commonly in the video gaming.

The widest application of the virtual reality has been for the consumers of gaming and entertainment industry, providing tremendous experience to the viewers and the players. Some of the craziest examples would go as the following:

Though Virtual Reality technology has also gone beyond just these examples, as VR-based Vision Therapy popularly known as ‘Vivid Vision’ is already expanding in Europe while making its way to Asia as next.

While Facebook’s recent purchase of Oculus, the state of the Virtual Reality technology looks promising.

Imagining the way the use of the mobile phones have gone the next way, similar evolution would be seen with VR. As seeing is believing, the promises and the growth of this technology have seen a tremendous growth. With Popularity on its rise, VR has made its way to the minds of big tech giants such as Facebook, Google, IBM, Apple, Microsoft, Samsung, Sony, and many other big names to specifically create teams to develop, research and innovate on the VR technology.

As it is already paving way for many of the technological changes, it made its way to the virtual reality applications by bringing its features in hundreds of Apps such as:

Along with the Virtual Reality technology, the Augmented Reality apps are also becoming popular among the masses and are becoming a dominating innovation over the application world.

If today, you ask a child, which games they love the most, the obvious answer would be Pokémon GO – an Augmented Reality based application, which is location-based and uses your camera to display a Pokémon right in front of you! Maybe on your table or next to your desk, while you are at office or having breakfast at home.

It became popular as it takes the players out of their homes, in search of pocket creatures and quests. The favourite of all time and the classic Temple Run also came to the VR platform and provided an experience of a running game to the player by being an Augmented Reality app.

The markets for Virtual Reality technology and the Augmented Reality Apps have started to grow with such applications which have the potential to take the world by storm.

Apps like Snapchat and Ikea app are taking the full advantage of the increasing processing powers being offered by the present day smartphones to provide people to take a look at the augmented version of the real world.

As also with the recent release of iOS 11, Apple offered the developers the ARKit, which further allows the developers to create Augmented Reality Apps. From games which make you feel being chased by a zombie or an application to test a tattoo on your skin without getting it inked, the potential of AR technology is beyond imagination.

With more possibilities opening with each development, we are already moving into a future which really looks like it will be augmented and totally Virtual Reality based!