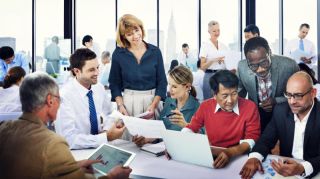 Diversity in the channel is a mirror of the wider challenges within the technology industry, particularly in terms of women in tech; the UK has the lowest participation of women in the STEM workforce in Europe. Recent figures show that just eight per cent of the UK’s top VARs are run by women. So, how can we as an industry open up more access to our sector? What needs to change to encourage a shift in attitudes and a move away from the channel being widely considered a “boys’ club?”

It’s hard to look at the channel in isolation. We have to take into consideration the context of the wider IT industry.  This isn’t a UK only problem; Silicon Valley’s major diversity problem constantly makes the headlines.  Silicon Valley Bank's 2017 "Startup Outlook" report reveals that despite intense scrutiny, the number of boards with no women increased in 2017.   More than 70 per cent of the 941 startups surveyed don’t currently have a single female board member. This is up from 66 per cent the year before. It’s not just at a senior level.  Companies with no women in executive positions has increased, to more than half of the companies surveyed. The UK reflects this pattern.  2015 figures from Procorre highlighted the gender imbalance at director level in London’s Silicon Roundabout tech hub; only 18 per cent of 4,000 directors – around 720 people – were women.

With the likes of Google, Netflix and Buffer endeavouring to change this, what’s clear is change needs to start from within.  Looking at the UK channel, there has been a shift in terms of diversity – especially on the sales side – however, this change simply isn’t happening fast enough.

There’s an argument to say that the issue extends all the way back to the curriculum. We see so much diversity becoming pushed out at school stage, which leads to just 13 per cent of computer science and IT undergraduates in the UK being women. Already we’re dealing with a self-limiting talent pool. Black and minority ethnic and disadvantaged young people are also considerably under-represented.

It goes back even further to the failure to engage young girls and harder to reach groups with STEM subjects in schools.  Ultimately how IT is actually taught needs to change. Focusing on more exciting areas like coding and cybersecurity will inspire more excitement here.

While the industry is aware of the challenges in terms of diversity, we’re taking our time to address them. At the same time, our slow reaction time is widening the skills gap, and compromising the business benefits delivered by a diverse workforce - increased productivity and creativity.

Speaking personally, we’ve been working hard to attract more women into our organisation.  Certainly finding the right female talent is not always possible.  If we’re committed to this process and still finding it challenging, I can only wonder how businesses who are less invested in the process are doing.

Looking at other parts of the industry too, the lack of diversity is restricting innovation and creativity as ultimately, ideas are coming from the same stable – white, middle class men.  Take wearables, a clear example where there are only men developing a range of products; the psychology of wearable tech products are designed as a problem for a solution, rather than a solution for a problem. Clunky, oversized, wearable tech is unintentionally tailored to alienate half of their potential customers.

It’s not just bringing women into tech – and the channel - that’s the challenge but holding onto this vital talent pool. Last year’s study from showed that 56 per cent of women in tech jobs will leave their positions at the “mid-level” point, just when it becomes more expensive for employers.

Lack of equal pay is highlighted as a key reason. In the US women in tech earn 73 cents for every male dollar equivalent. It’s difficult to be passionate and committed about a job when you’re not fairly compensated. Promotion bias too has created a self-perpetuating cycle where the majority of leadership roles are held, of course, by men. A lack of soft skills in the sector such as communicating praise has created the perception of women in tech operating as “lone wolves”.  A softer approach could help counter a culture that can be aggressive and isolating for women.

Opening up the talent pool

Back to the channel, it’s our view that we have an obligation to give back to its community.  This is about companies making themselves more attractive as employers in ways that go beyond ticking the CSR checklist.  We have to recruit differently, create different work-life options, incentivise and reward more innovatively. We need to look at other industries to see how they’ve broken down barriers – and lowered ceilings. It’s about how we keep people too. Are we doing enough to encourage returners for example?

It comes back to organisational culture. Specifically within the channel, we need a cultural shift towards taking that long-term view.  We work in fast-paced, quarterly cycles, driven by commercial targets.  Leaders in the channel need to think beyond year end.  Larger players are already doing this and doing it well.  BT is a great example here, drawing on its place as a large employer and high-profile brand to lead by example.  This now needs to cascade further down the channel in terms of diversity initiatives.

Making the channel a better place

Diversity makes great business sense. Right now, our customer are becoming more diverse.  By failing to address our own diversity, customers will outstrip our ability to match them, in terms of culture, outlook and ambitions. It’s down to us to go out and understand their needs, see how they’re changing and ensure we shape businesses that reflect these.  The change has to come from within.

We need to be less product focused and more people focused – ultimately it’s our people who are our greatest asset.  Take a step back, look at other industries, learn what they’re doing better and bring these into our organisations.  Understand what’s happening in vendors’ worlds and with customers, and be serious about making that change.

The prevailing culture of fear and apathy within the channel in responding to our diversity challenges is potentially dangerous.  Let’s look at what works, how it works, and how, collectively, as an industry we address it. Look at gender bias in compensation, look at promotion pathways and the cultural dynamic. We’re through with the lip-service that has defined the approach to date. There’s a brilliant opportunity here for all of us but we need to act now.