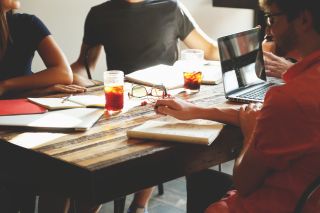 When Larry Fink, CEO at the investment firm BlackRock, wrote his most recent annual letter to CEOs around the globe, he urged business leaders to think beyond quarterly profits. “Commitment to a long-term approach is more important than ever,” he wrote. Then he added, “The global landscape is increasingly fragile and, as a result, susceptible to short-term behavior by corporations and governments alike.”

In conjunction with Fink’s message, venture capitalist Hemant Taneja (whose portfolio includes Snap and Airbnb) advocates a new way to think about the tech development cycle — one that revolves around “minimum virtuous products” instead of “minimum viable products.”

These minimum virtuous products weigh social, economic, and environmental implications and have appropriate safeguards baked-in. In other words, for Taneja the first phase of development needs to be about more than including the minimum features and functionality to attract users. It must also consider, as Fink urges, the long-term implications of product development.

Above all, Fink and Taneja invite us to think more broadly about the ingredients of successful tech businesses: from their vision and mission, to the everyday practicalities of deciding what performance metrics matter most.

The idea of starting with virtue as much as viability is intriguing — but it doesn’t tell you how tomorrow’s leaders will get work done right.

I believe they will organise their businesses and their own leadership approach around eight critical steps:

Businesses spend about $364 billion a year on research and development – and waste about $300 billion a year in lost productivity through employee disengagement.

How do we avoid this approach of one step forward, one step back? We must make work matter.

Belief needs to animate every task, project and job role in the business. That means there must be a clearly articulated vision of what the business is trying to achieve — and why that’s important — that can understood in the context everything that’s being done. Yes, that means even the most mundane tasks need to be fuelled with meaning. They might be repetitive; they might be tedious. But leaders need to ensure it’s clear that everyone knows why those tasks are necessary.

Alibaba’s Jack Ma will tell you that customers matter more than anyone else in business. Virgin founder Sir Richard Branson will tell you it’s employees who matter most. Billionaire investor Warren Buffett will tell you to carefully consider shareholders. The truth is, leaders need to align the needs of all three groups to be successful. Projects that serve only one group seldom lead to sustained business success. Just as the “move fast, break things” mantra was first gaining traction, the Stanford University academic Professor Jeffery Pfeffer looked back to a a golden age of leadership in the mid-20th century when “CEOs saw their role as balancing interests.” The professor concluded: “What was true then is even more so today, in an age of knowledge work, outsourcing, global supply chains, and activist interest groups.” In the end, he wrote, “shareholder returns are just an outcome of management practices that respect all constituencies.”

Assemble a great team of people, set the rules of the game, get out of the way, and let them play. Leaders need to be clear on what the military call “Commander’s Intent”: clearly defined outcomes and operational parameters. Talk to distinguished service personnel like US Navy SEAL, Commander Mark McGinnis, and he’ll explain that clarity over the desired end goal and operational limitations should be enough for high-performing teams to figure-out the best way to get there. If a leader trusts a team to solve the problem they all face, then the team owns the solutions and will be more invested in securing successful outcomes.

Planning tends to be an expansive process when every possible contingency gets considered. Human brains struggle to get emotionally enrolled in complex issues and tasks. You need to help everyone understand where they are now, where they’re headed, and the route they’re going to take. And you need to make sure people think and feel it matters – that there’s a rational and emotional payoff. Teams are best served by breaking-down complex work and extraordinary goals into relatable steps. Each project plan should consist of a small number of key initiatives, milestones that mark progress, and a best next action — a clear, practical step that will move the project forward at each point in time.

The primary everyday task of a leader is to help teams maintain direction and momentum towards their goal. One common cultural problem to overcome is the belief that every task needs 100 per cent effort. In fact, every task needs 100 per cent completion. When you’re 99 per cent of the way there, all you need is an extra 1 per cent to sign off a job as complete, not an extra 10 per cent or more. More work will get done — and much more quickly than before — if there’s a culture of barely accomplishing tasks: doing just enough to get a task over the line before moving rapidly to the next. And here’s a leadership communication tip: an everyday question can help keep things moving forward: “What’s the one thing we can do next to move us closer to our goal?” You’re not inviting multiple options here, you want to know the single best next action.

6. Focus on solutions, not blame

The wrong words at the wrong time can skew priorities or deflate a team’s morale. Leaders need to be careful in their choice of language and tone when they’re chasing progress. “Why haven’t you done this?” might be the question in your head, but it’s heavy with implied blame. Far better to ask “What are the obstacles to getting this done?” or “How can we get this done?”

This switch to neutral language moves dialogue from potential conflict towards a more positive discussion of the best next action. Neutral language can help all the more the bigger the gap between you and the people who are doing the work — the more intervening links in the management chain. When people worry that a leader scrutinising their work, there’s a natural temptation to deflect blame. Neutral language removes the temptation. Better still, inviting people to describe how they would solve a problem can inspire them and empower them.

7. Getting people to pay attention

If you want to your point to be heard, you need to work on hard on being a better listener

first. The empathy expert Brian Carroll, founder and CEO of Markempa, explains that leaders often fall into the trap of listening to reply rather than to understand. They leap in with their own “always right” answer before they’ve truly understood the other person’s point of view or concern. In an era of modern work when we all face growing communications noise across an increasing array of channels, employees choose where and when to pay attention. They are most likely to listen to a leader who listens to them.

In aggregate, Workfront has helped to manage more than 467 million hours of activity. What I’ve learned is that five new work performance indicators (WPIs) would give a better sense of the quantity, quality and sustainability of activity:

The first WPI compares two types of activity: how much time is spent on running the businesses versus changing the business/creating something new? This will show if effort is directed where it needs to be directed.

This indicator is both a measure of the total capacity available, and the capacity utilisation of your the business. Studies by Workfront and McKinsey have found that modern worker utilisation is less than 40 per cent. That represents more than $3 trillion of wasted human capital investment each year. Leaders of knowledge-driven businesses can use the Capacity WPI to determine just how much more their organisation can do.

How long does it take to complete a piece of work - and how frequently work is done in the time originally committed (work-to-commit ratio)? The Velocity indicator reveals how long it’s taking your organisation to get things done. Ultimately, this metric is about the speed of fulfilment - and that’s vital in an era that values choice and immediacy.

Traditional quality assurance systems ask whether a product is good enough to put in front of a customers? This indicator looks at the perception of work quality within the organisation. Is the person who commissioned a piece of work from a co-worker, team or department happy with the quality of work they’ve done?

5.     Engagement: Is there pride in the quality of work?

You’re going to track trended ratings about people’s clarity and criticality of role, and their sense of pride in the work accomplished. The Engagement indicator flags when commitment and belief in the task, project, team or organisation is waning – and when leaders need to act to revive that belief and commitment.

There is an overlooked truth at the heart of Hemant Taneja’s encouragement to think about the implications of innovations - it’s virtues as much as product viability.

However clever the technology or proposition, businesses are run by humans, for humans. Sure, human performance may be increasingly augmented by technology as tasks are automated. But it’s humans who build and run businesses. And humans who buy their products and services.

Mastering modern work is therefore about leading people. Leadership is about human interaction and, at its most noble, helping people to achieve the extraordinary.