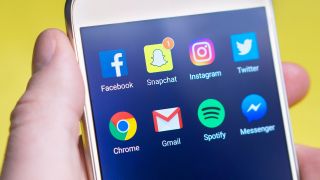 The way we interact with photographs and images has changed drastically in the last two decades with the move to digital, but their importance to us has only grown in significance.

The camera is a revolutionary invention that has stood the test of time. One that has successfully evolved with the digital age. The camera has successfully moved from analogue to digital, undergone a degree of miniaturisation once thought impossible and in doing so has kick-started a whole new life for the humble photograph. No longer restricted by the cost of film and the cost and time of developing, the volume of photographs we take has soared. With it, the role of the photograph has moved from being a capture of a meaningful moment to being a major way we communicate on a day-to-day basis. From social media to citizen journalism – the digital democratisation of photography and the availability of highly-effective camera-equipped smartphones has enabled it.

The UK, much like the US, is firmly a smartphone society. The 2018 Ofcom Communications Market report revealed that 78 per cent of UK adults had a smartphone at the beginning of the year. This is illustrative of the seismic shift in both mobile internet use, but also in camera ownership and use. Smartphones have largely made the compact camera obsolete as a mainstream product, with many smartphones more than capable of outclassing their dedicated pocket camera counterparts, while also presenting some professional cameras with a meaningful challenge.

It was estimated by InfoTrends that in 2017, 1.2 trillion photos were taken. However, as immense as this figure is, it remains a highly conservative figure, representing a 9 per cent rise year-on-year from equally restrained 2016 estimates of 1.1 trillion. We say this is conservative because, depending on how you try and calculate photograph volumes, the figure can easily jump way above these numbers.

The problem of storage

Take this theoretical (and more generous) alternative example. Estimates from May 2018 put the global population at around 7.6 billion. Assume that roughly two thirds of those people will have a mobile phone, and 80 per cent of those handsets have a camera built-in. That gives us in the region of four billion potential photographers, each with a camera in their pocket.

If each takes an average of five photos per day or 1,825 photos a year, that quickly exceeds seven trillion photos a year based on the above measure.

Now, think about how you would access and recall those photos? The days of developing all those images and cataloguing them in albums, or even keeping them in a shoe box in a cupboard, are no more. Today, an all-digital flow of images creates new problems for locating that key image you want to show and share.

The endless scroll through your photos application, online photo album, your Instagram or your Twitter feed, can make accessing older photographic memories time-consuming, frustrating and ultimately unenjoyable. The volume of images that we now take, with pictures usually lacking any indexing or naming to help with searching, makes for an enormous unstructured flow of data. This is especially true as there is little need to delete anything. It quickly leads to treasured memories and milestone moments being lost in the scroll, taking so long to find on a whim that many will give up trying after a few minutes.

Last year, 85 per cent of the photos taken in the world were done with a phone. Only 10 per cent were with a dedicated digital camera. It is estimated that there is almost five trillion digital photos stored at the moment, with it not necessarily being easy to find, search and display them. Most are sat on hard drives in folders, rather than thumbnailed and indexed in online or offline digital albums.

So, how do we overcome the problem of our most important pictures being lost in the endless historic scroll? Be it in our image-driven social media services or our desktop and smartphone photo gallery apps?

The logical thing is to commit your most treasured images to a physical form, whether that is a photo album, or by using them to mark other key moments as gifts or mementos.

Yet, the digital transformation of photography and images has, until recently, made It harder to access professional photo printing. Home photo printers offer limited quality and have waned in popularity. To get a good digital colour image printed onto photo paper or other high-quality stock usually involves a special effort. Finding the images, loading them onto a USB stick, and going to a photographic store, chemists, supermarket or other specialist to then layout and print on a self-service machine in-store.

However, users want easier ways to turn pictures into things like physical photo albums without having to make a special trip to a store. This is something that everyone from the Instagram generation to the amateur photographer can make use of.

Hardware and software vendors are starting to react to this shift, putting photo editing, manipulation and output front and centre in the latest platforms to make it as easy to post to social as it is to produce a physical photo album. Not only are we seeing more tools built into operating systems to make sifting through those five trillion stored images easier, but we are also seeing new innovation to make it easier to design and order prints, albums and other personalised photo gifts directly inside system photo apps.

Take macOS for example. Apple has implemented a range of new features in the latest Mojave release to make photo management easier. For instance, Gallery View has made previewing images easier to make visual identification of pics that don’t have obvious filenames faster and simpler. New Quick Actions have made basic single and batch editing like rotation and cropping easier to do and accessible anywhere in the OS.

An opportunity and a need

Apple Photos, the default OS repository for all your images has more advanced photo handling features. It has also been opened up to third party commercial services. External service providers can now integrate with it, adding design, editing and ordering capabilities for professional prints and products like photo albums, calendars and greetings cards within the app, without leaving home. It means that once you have tracked down those important images in the never-ending scroll, you can now preserve them there-and-then as professionally printed physical copies that can be kept, shared and appreciated on-demand for all time.

The volume of photographs being produced has eclipsed the analogue age by quite some way. With trillions of photos existing only digitally, there is an opportunity and a need to commit them to analogue and offline formats en-masse, in order to better facilitate recall, sharing and sentimentality. Gallery shows of photographs still rely on physical images, rather than screens showing digital files. People coming off a roller coaster ride at a theme park want a physical photo reminder of their experience for future memories, not just a digital image emailed to them. The same applies to important social media and smartphone moments caught digitally, so they do not get lost in the scroll.