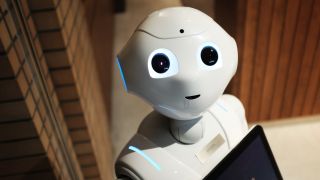 While the words 'this is my treat' or ‘I’ll let you decide’ are  music to our ears, others such as ‘unexpected item in the bagging area’ are likely to send your blood pressure soaring and your good mood to disappear faster than a rabbit down a hole.

With self-service taking over more and more of our daily lives at home and in the workplace, it could be easy to see it as nothing more than a cynical attempt to outsource customer service jobs to the customers themselves! Supermarkets, banks and restaurants now seem to be offering it as routine when we’re out and about and IT service desks, human resources and procurement are using it to handle routine enquiries in the workplace. Not exactly ‘customer service’, more like ‘do-it-yourself’ you may think.

What the survey says

But a recent Cherwell survey of over 2,000  people has revealed that, despite demand for self-service being relatively slow to take off since its arrival in Britain in the 1950s, Brits now appear to have fully embraced its benefits and many find it empowering to be able to control activities themselves and a much quicker way of getting things done.

Not having to wait for a member of staff to be free and being able to perform routine tasks at a time and place convenient to you, can save a considerable amount of time and open up a whole new world of convenience. Twenty-four per cent of respondents to the survey even said that the lack of human interaction was a bonus for them, perhaps finding that the obligatory small talk with others was just too much to bear.

Of course, there have been teething problems with machines open to card fraud and theft being made easier (by customers using fake barcodes for example), but ‘wait warping’, the illusion that things are moving faster than they really are, seems to make up for that when customers are empowered to take control of their own destinies.

The survey revealed that 86 per cent of Brits say that they find self-service a positive experience, as long as there is support when something goes wrong. Humans were the preferred form of support (49 per cent), while virtual chat (31 per cent) and email support (26 per cent) were still popular. Fifty-four per cent said that an available human was second only to not having any errors in the software (70 per cent) in ensuring a positive experience. Nearly three quarters also reported that they found that self-service at work speeds up getting things done, and two fifths said that it makes their lives easier.

How it looks in Germany

The survey also compared attitudes towards, and experience of, self-service in Germany which showed that, despite the popular stereotype of Germans being more technologically sophisticated, Brits seem to have embraced self-service technology slightly more readily.

The biggest difference in attitude was that 27 per cent of Germans said that having cheaper products and services was the most important benefit of self-service against only 14 per cent of Brits, maybe because this is something that British consumers are yet to experience (or believe!).

We fall into two categories

Broadly speaking, most people seem to fall into two categories – those who have no problem with self-service, don’t want to interact with anyone else and just want to be left alone to get on with what they have to do, and those who are wary or impatient when interacting with machines and who will only tolerate them up to a point. They then seek human assistance. A 2019 poll estimated that the average person will spend 47 days queueing over the course of their lifetime, so no wonder some people will bite the bullet and try to use an unfamiliar machine even if their instincts are usually to seek out a human assistant.

It’s also interesting that nearly 1/3 of Brits are happy to receive help from virtual assistants; so, while we want human interaction when something goes wrong, this person does not necessarily have to be physically available. With virtual support technology having come on leaps and bounds in the last few years, this figure is likely to get even higher over time.

While some of us can still remember the days when petrol station employees filled your car for you, supermarket employees bagged groceries and retailers measured you before you tried on their shoes, those days have long gone and self-service will continue to become more widespread.

Technology will continue to improve the customer experience in many ways. AI for example has already transformed customer service for the better, with virtual agents or “chatbots” now able to perform a myriad of routine tasks all by themselves, leaving their human counterparts available to solve more complex issues. But changing passwords or requesting a new PIN number is only a fraction of what virtual agents will be able to do in the near future. As these AI algorithms continue to learn, they will become more sophisticated and be able to complete many more of the complex tasks too. Virtual agents today use machine learning to better understand the flow of conversation between agent and customer and how to fulfil requests. A programmer uses data and transcripts from previous customer service interactions to train the virtual agent on how to interact better with customers.

As self-service technology continues to improve, we will soon be able to resolve the majority of our problems, and complete the bulk of our tasks, through self-service models alone. While interaction with human agents – whether face-to-face or virtually – will never go away completely, it will be reserved for those situations where human insight and expertise is required.

For more information, please refer to the Cherwell report “Unexpected item in bagging area” which can be downloaded here.