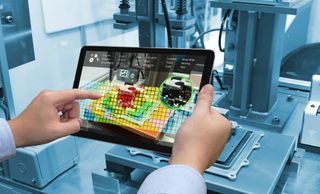 Human Machine Interfaces (HMIs) used in hazardous or industrial applications have a difficult life, and their designers face many challenges when integrating interactive technologies into these systems. A new generation of touch controllers will transform the design of industrial projected capacitive (p-cap) touchscreens, with technical innovations that deliver better performance and functionality than ever before. Specifically, a much higher drive voltage brings improved tolerance of unfavourable conditions. In this article, we highlight potential issues when designing touch interfaces for industrial applications and explain how the latest touch controllers and their new features can help engineers overcome such problems.

The biggest constraint on p-cap touchscreen performance is noise immunity. When the touch controller receives a signal from the sensor, it must distinguish between genuine and false touches (created by electromagnetic interference, or EMI). A finger pressed firmly onto the screen will give a clear signal – but that signal will be weaker if the user is wearing gloves, is touching lightly, or if the screen is behind thick cover glass, and/or the surface is contaminated. The key to improving sensitivity is the drive signal applied to the sensors Transmit (Tx) array of electrodes by the touch controller. The level of this signal is a classic trade-off, a low voltage signal can be overwhelmed by EMI from the environment, a high drive voltage can create interference in the sensor itself, which can potentially degrade performance.

Most p-cap touchscreen manufacturers are forced to use a Tx signal with a DC current of between 20-30V, due to limitations in available “off-the-shelf” touch control components and ASICs. However, Zytronic’s new ZXY500 range of controllers have been purpose-designed to operate at an industry-leading Tx drive voltage of up to 40V, enabling full multi-touch detection in extremely challenging industrial applications.

The results of this innovation are dramatic. The higher drive voltages reduce the influence of noise on the data captured. A significant source of this noise is the proximity of the display itself. With all projected capacitive touchscreens, it is necessary to have a gap (air or resin filled) between the front of the display and the rear of the touch sensor, and the new ZXY500 controller now allows this gap to be substantially reduced, depending on the size and type of display selected for the system. This not only allows the whole interface to become slimmer and more compact, it also reduces optical parallax between the display and the overlaying sensor, improving the user experience and accuracy of touch.

Each Zytronic projected capacitive touch sensor is manufactured with a conductive matrix laminated within the rear surface of the screen. This matrix consists of an array of ultra-low resistance, microfine electrodes, which are near invisible to the human eye on a powered display. These electrodes are connected to the remotely mounted touch controller, which applies a small charge to the sensing array. When a finger, conductive stylus or known object approaches the front surface of the sensor, a change in the charge applied to the conductive matrix is detected at the crossing points within the sensing array. This induced change is largest immediately beneath the touch points, and the touch controller’s firmware algorithms filter interference, calculate the applied touch positions and rapidly convey this data to the host computer in a stream of X-Y positional co-ordinates.

Zytronic’s experienced team of engineers have designed all three elements of the touch solution to work optimally together: the sensor, the controller and its embedded firmware.

In addition to directly improving performance, this new generation of ZXY500 touch controllers combined with Zytronic’s flexible p-cap manufacturing process, provides system designers with limitless opportunities to customize the appearance of the user interface irrespective of quantity, optimizing it for the application and helping to differentiate the overall hardware from competitive products.

The new controllers allow the border around the perimeter of the touch-active areas of the screen to be substantially reduced – for example a touch sensor designed for a 55” display can now be designed with sub 10mm borders, helping to reduce the user interface ‘footprint’ – useful, in applications where space is limited.

Zytronic has been able to achieve this border reduction through proprietary new touch detection algorithms in firmware which allow the transmit and receive electrodes in the sensor borders to be located far closer together without creating interference or “cross-talk”.

The ZXY500 controllers also now make it possible to design “soft” keys around the edge of the dynamic active area of the projected capacitive touchscreen. These fixed touch “buttons” are managed by the same controller and their function can be defined by the system designer – for example keys for dimming/increasing brightness or raising and lowering volume. This is useful in applications where sealing and water ingress via mechanical controls could be an issue. It also enables designers to use smaller, cheaper displays, while still retaining touch interactivity around the perimeter of the screen in a single, unbroken surface.

The new p-cap controllers support up to 80 simultaneous touches, enabling true multi-user interactivity and improved “palm” rejection capability, i.e. detecting and ignoring anomalous touches, such as an arm resting on the screen. The Zytronic proprietary ASIC within the ZXY500 controllers also increase the speed of touch detection, updating touch co-ordinates in just 1ms at the controller output – reducing touch latency by a third compared to the previous generation controllers, and improving the overall user experience.  They can also reliably detect touches through more than 8mm of overlaying glass - even with gloved hands, and are unaffected by rain, salt water, oil or ice on the surface of the touch sensor.

A common objection to all types of touchscreen is that they don’t provide tactile feedback in the way  mechanical controls do. This can be a drawback, for example, if a user is looking away when operating the screen, which can result in accidental touches.

A feature within the ZXY500 projected capacitive touch controllers which addresses this issue is “force” sensing. Zytronic has developed custom touch detection firmware which responds to the increased surface area of a fingertip when pressed more firmly onto the screen and differentiates its output accordingly. Software developers can then use the graduated information from the controller to activate different functions depending on the applied pressure, such as issuing an audible message alerting the user to the option selected when the screen is touched lightly, and then confirming the choice when pressed harder. So, for example an instrument can say ‘temperature’, ‘pressure’ or ‘time’ as the user’s finger moves across the screen. Once the finger is over the correct option, a firm press makes the selection, without the risk of an incorrect touch.

A key factor in the success of a user interface design is how easy it is to integrate the controller into the rest of the system. USB is an extremely popular interface, but there are some applications that require RS232, I2C or SPI interfaces.

Size is also an important consideration, and the smallest p-cap controller in the new ZXY500 range has been significantly reduced in size to just 61 x 64mm to support Zytronic touch sensor sizes up to ~19”. The flexible printed circuits (FPC) connecting the touch sensors to the new controllers have also been reduced to just 120mm in length, further simplifying integration.

The latest Zytronic projected capacitive touch controllers set a new standard for performance, enabling sensors to operate reliably in industrial environments from which they were previously excluded. Even in demanding conditions with high levels of EMI and exposure to contaminants, the touchscreens provide a rugged and responsive user interface. They are ideal for outdoor and unattended applications where it can be fully protected from physical damage and environmental factors without compromising performance.