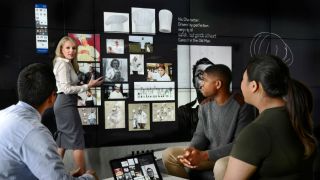 Most employees will have attended a conference call where a participant has said “sorry, could you please repeat the question?”

While they may well have a legitimate reason for this request – after all, the buffering caused by a weak mobile signal or a slow internet connection can make it difficult to hear – many people will recognise this as code for “sorry, I wasn’t listening.”

Conference calls are perhaps the necessary evil of today’s office communications. Few people want to spend the majority of their day on call after call but, in many organisations, this culture is deeply embedded. As old fashioned as it seems, the humble call remains one of the key ways for keeping in touch with colleagues and for updating management on the status of shared projects, KPIs and other activities.

Participants will dial in and, once they have made their introductions, they typically hit the mute button and listen out (often unsuccessfully) for their cue to talk, pretty much ignoring other attendees’ action points and those wider discussions that do not affect their own day-to-day work. By no means does this imply they are skiving. More likely that they are using what they consider to be ‘dead time’ to catch up on email or work on other, more pressing tasks that they believe should take greater priority.

Calls obviously play a vital role because they provide the chance to discuss and share information with colleagues in a way that other communication tools – email, instant messenger tools, etc. – simply cannot facilitate. But as the above scenario illustrates, this does not mean they are a productive use of everyone’s time.

Neither are conference calls inclusive or democratic as they fundamentally fail to provide each and every attendee with an equal platform to participate. Typically, they are run by one or a small handful of dominant individuals who control the agenda as well as the accompanying PowerPoint deck. These are the people who ask most of the questions and feel comfortable and confident enough to enter into the discussion. Meanwhile, there will be another group of employees who will largely stay silent even though they could have plenty of valuable ideas and opinions to contribute.

Yet, never has there been so much need for productive conference calls. With organisations employing teams that are spread across the globe, and businesses increasingly relying on external consultants, partners and gig economy workers to supplement their traditional workforces, there is a growing requirement to help remote, widely dispersed teams collaborate in a more effective manner.

This is where artificial intelligence will play an important role.

AI as an intelligent assistant

A weekly conference or video call about sales targets, marketing campaigns or the new business pipeline tends to follow the same basic agenda each and every time it takes place. With such a predictable format, it is easy to imagine how smart bots could attend these meetings on behalf of their human counterparts, recording action points, minuting the discussion, as well as even providing routine updates.

In the event that the chairperson or a colleague raises a question that the bot is unable to answer, the bot could nudge its human – for example, by generating a pop up on their PC screen, or a notification on their phone – instructing them to interject with their personal update.

Instead of allocating a block of time each week or month in their calendars for these regular calls, participants would only have to be on stand-by in case their bots need assistance. It is a much more productive use of time, for them personally and for their organisation as a whole. They can get on with those tasks that demand their attention, yet still remain ‘present’ on calls. They can also read and review the bot’s meeting report at a time that suits them most.

It might not even be beyond the realms of reason to deploy a team of bots on concurrent conference or video calls, boosting productivity still further.

AI as a creative muse

As well as taking care of the more routine, administrative aspects of the collaboration process, AI could also be deployed to streamline and enhance even the most creative of projects.

Today, highly creative businesses, such as fashion designers, ad agencies or movie studios, all spend considerable time and effort on developing storyboards and tweaking designs, the vast majority of which will never even see the light of day. These are highly collaborative, creative processes which quite rightly fall within the domain of the human worker. Yet they are hugely labour-intensive and monopolise the time of highly-creative individuals.  With AI this need not be the case.

Chris Duffey from Adobe notes “there are now a number of technologies enhancing human creativity, such as Adobe Sensei; these illustrate the extent to which AI and machine learning can aid collaboration in the creative industries. These tools make it easier for organisations to search their digital archives and other repositories to find the right content for their latest projects. This includes conducting video and visual searches. By tagging content in line with hundreds – maybe thousands – of different parameters, AI can serve up exceptionally precise search results.”

This level of precision takes away much of the leg work associated with the creative process, but AI’s benefits stretch far beyond just being an assistant to humans.

These AI tools will learn from the behaviours of the teams they serve, gathering intelligence and interrogating how decisions are made in order to make proactive yet sensible suggestions about which images or video footage to incorporate in their design projects. Furthermore, in addition to being a ‘peer’ to creative teams, AI may even assume the role of ‘muse’, making suggestions that it suspects the team will be inspired by but would not have necessarily thought of without a technological prompt.

AI will certainly not negate the need for human collaboration in the workplace but it does have the power to make these interactions more productive and more powerful. By taking care of the routine and the mundane – and by accelerating and inspiring the creative process – it will most certainly make it more productive.