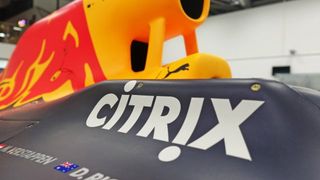 Yesterday’s British Grand Prix may not have been Red Bull Racing’s most successful race, with Max Verstappen and Daniel Ricciardo failing to make the podium, but the the team has built up a number of innovative technology partnerships in recent years.

Citrix and Red Bull Racing, which is headquartered in Milton Keynes, have worked together for ten years now, with the software giant providing a number of key services to one of the sport’s top teams.

Speaking to ITProPortal shortly before last weekend’s race, Christian Reilly, Citrix’s vice president, global product and technology strategy, noted that the relationship between the two companies has reached a new level this season, with the software giant being confirmed as an official innovation partner for the team earlier this year.

Formula One is a truly global sport, with the ten teams effectively needing to transport an entire business to 20 different locations every two weeks, which can involve travelling across continents.

Each car is equipped with around 100 sensors, monitoring everything from tyre pressure to brake temperature, generating hundreds of gigabytes of data during a race weekend, all of which can be analysed in real-time, giving Red Bull the opportunity to quickly make changes.

The need for real-time analytics has become even more crucial in the 2017 season, the first to feature radical new designs for the cars themselves, and severe limits imposed on the teams in terms of how much testing they can carry out.

Reilly describes the Red Bull team as “extremely self-sufficient...they know a lot about of technology,” as no Citrix employees are able to attend race weekends.

Due to FIA rules, Red Bull Racing are limited in the amount of workers that they can take to each race, with the pit lane team backed up by additional numbers back at headquarters, who are constantly analysing data being generated by the car in a bid to try and find that extra tenth of a second.

The team uses Citrix’s XenDesktop and XenServer offerings to access and analyse telemetry data from the cars, allowing engineers to collaborate in real time, no matter where they are in the world.

With the team expected to make around 30,000 design changes to its cars throughout the season, spotting an area for improvement early enough could be the difference between victory and second place.

Citrix’s offerings allow more team engineers and specialists to come together to work on the cars and provide their feedback, and can even log in remotely if travelling to a race weekend.

XenDesktop and XenServer also allow Red Bull Racing to host high-quality 3D and CAD data at team HQ in Milton Keynes, freeing up engineers at the track to work on VDIs without being slowed down by these graphically intensive programs.

The partnership also helps improve Red Bull’s IT security, helping to centralise operations in a small number of hubs, rather than needing multiple laptops, each containing important data, which can be lost or stolen.

The ability to run so many processes virtually also helps protect the team from harm should any hardware losses occur, or even if Red Bull Racing is ever hit by a cyber-attack.

The team also uses Citrix’s Netscaler gateway to connect to its supply chain directly, allowing employees to quickly and securely contact third parties in case of any issues, and once again helping to cut down on infrastructure and software costs.

But the partnership has not just benefitted Red Bull Racing’s championship push, however, as Reilly notes that working together has helped further Citrix’s own technology.

“Lots of the things that we do when we test with Red Bull Racing are really pushing the boundaries of Citrix technology...and that benefits all of our customers, because if we can make something work in the world of Formula One, then it can also be applicable to some of the more sedate industries we work with.”

“It's a remarkable difference when you have this kind of partnership,” Reilly says,”it's rewarding...at a different level."