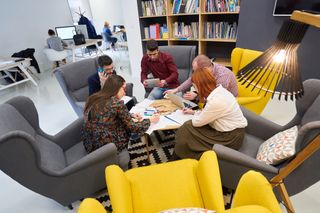 Upon hearing the UK Referendum results for the first time there was, at first, a general concern amongst economists and business owners, about what the future could hold for various industries, including tech.

However, even in the aftermath of the surprising Brexit decision, the UK tech industry continues to see strong growth and development, for what appears to be a promising future for UK tech, in a global sense.

Much of this growth is due to the focus that Croydon has employed over the past few years, on boosting tech startups. The town’s determination to boost the industry has earned itself the nickname, the Silicon Valley of South London.

Just what is it exactly, that Croydon is doing to boost the UK tech industry and economy as a whole? Croydon-based storage unit suppliers, Storebox, delve into the work that is being done by the town to boost tech businesses, as well as what it means for the future of UK tech.

Founded by Jonny Rose back in 2012, the idea of Croydon’s Tech City Project was put forward to the town’s council, as an aim to make Croydon a well-known city of tech.

In just over 4 years since the initial idea was put forward, the Croydon Tech City organisation has been launched, along with various initiatives introduced by the organisation itself.

The understanding that education in tech is key

There is a general consensus across the UK in that education in tech is poorly lacking, within educational institutions prior to college and university. Without knowledge and education, the industry will be unable to grow, due to limited levels of tech professionals or enthusiasts entering into tech.

With that in mind, the Croydon Tech City Project made a conscious effort back in November 2013, to dedicate an educational scheme to the world of tech. Future Tech City was held at the BRIT school, in which parents, children, teachers and students could learn about the likes of coding from professionals at Google and the Financial Times.

Working with the Mayor of London, Croydon kickstarted a campaign in 2013, that offered full relief on rates, for businesses in their first year of occupying an office space. The campaign aimed to encourage tech start ups to begin their businesses in Croydon, through financial incentives.

Just 3 months after the campaign began, the ONS revealed that Croydon had become the fastest growing tech cluster in the capital, with a 38% increase in its number of tech businesses from 2011 to 2013.

Recognising the issue of women in tech

It’s well known that the number of women in tech compared to men is severely lacking. Gender diversity within a workplace has become a focus for many industries, however in the tech sector, it appears to be lacking. Within digital businesses, just 27% of employees are women, compared to the 73% that are men.

The issue goes even further, particularly for those women who are currently working in tech. Statistics show that an obscene 14% of CIO roles in tech are filled by women, with the other 86% taken by men.

The town of Croydon has a focus on improving the position of women in tech, through the annual Croydon Tech City women in tech event. The event features a host of local women discussing their entrepreneurships and businesses, as a way to encourage other women to join the tech industry through a career of their own.

With the aim of building a tech city like no other, Croydon opening a brand new tech hub opened in May last year, offering a dedicated coworking space for tech businesses to begin and to grow together.

TMRW promises to offer tech companies a foot in the door to what is a global industry that is constantly on the up. This concept worked especially well, and continues to do so, especially due to the increasing costs of both commercial and residential property in nearby central London. Startup businesses are now looking for areas close to the capital, that offer much more affordable opportunities to them.

With less costly spaces such as TMRW, fantastic transport links and with a focus on the tech industry, Croydon is now regularly welcoming plenty of the industry’s professionals into their borders.

With a view to boosting the UK’s tech industry, Croydon’s officials worked together to research, plan and implement a strategy that would encourage tech businesses, old and new, to join together in the South London spot.

From this, a tech community of its own has developed in the town of Croydon, which has resulted in the town becoming known as the UK’s fastest growing tech city. There are now well over 1,000 tech and digital businesses based in Croydon, and there are no signs of the boost stopping there.

Now that the business aspect is in full swing, there are future plans in place to regenerate and redevelop the living areas of Croydon. Improving the residential areas is bound to entice many more businesses to making a home in Croydon, by reducing the need for employees to commute.

Central London and other areas such as Bromley, Chelsea and Kensington were outranked by Croydon, in the top ten growing UK economies. Despite the greater Gross Value Added for London being significantly larger than Croydon (£298,520 vs £19,800 in 2014), the growth percentage for Croydon was higher than that of London (9.3% vs 8.9%).

The incentive to boost the UK tech industry has plenty to do with the increase in annual economic growth, as businesses choose to reside in Croydon over the much less affordable central London locations.

Croydon’s efforts have proved successful and will likely continue to do so in the future, even in the aftermath of Brexit. Tech entrepreneurs or startups who are currently looking for a solid investment into their future, should consider Croydon as the top destination to begin their business. You’ll find many like-minded people surrounding you, and a tech community that is bound to flourish even further in the future.