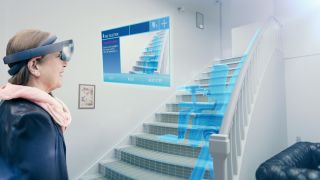 One of the biggest problems facing the modern world is our aging population, as post-war baby boomers retire and become the largest dependent population group in history, with recent figures finding that one in eight people worldwide is over 60 years old.

Fortunately, modern technology is here to provide a number of solutions and options to deal with this issue.

Many of us will be familiar with thyssenkrupp’s existing mobility products - the elevators and moving walkways you may have seen in our offices, airports, train stations and even apartment blocks. The company is also a leading light in the home mobility space however, and this week, ITProPortal went to see how thyssenkrupp is teaming up with Microsoft to make it easier than ever before for elderly people to stay mobile.

Microsoft and thyssenkrupp have a long history of working together, with the companies previously teaming up to utilise the former’s Azure cloud platform, but now the two giants will be looking at using some of Microsoft’s most future-looking technology - namely, its HoloLens mixed reality headset.

Chairlifts have become a common presence for many elderly people in the UK, allowing homeowners an easier way to move between the floors of their house without the risk of falls.

However designing and installing a chair lift can be a complex process, notes Javier Sesma, thysennkrupp’s director of research and innovation. Staircase design is different in every house, meaning that thyssenkrupp’s engineers often need to create an all-new design for each chairlift they install.

Installing a chairlift can also be an intrusive process, requiring engineers to spend a significant amount of time in a customer’s home, a fact which may be distressing for some elderly customers.

Enter HoloLens, which thyssenkrupp has been testing as a means to make designing and visualising chairlifts a far easier and smoother process. Using the headset, thyssenkrupp engineers can quickly scope out measurements for the new chairlift, taking in considerations such as existing fixtures or obstructions in the home which may make it difficult to get in or out of the chair.

HoloLens also allows the customers themselves to quickly view exactly how their chairlift will look in their home, allowing them to make choices regarding colour, upholstery, and even the look and design of the rail used with the chair - all making the product fit into their home. Sesma notes that ordering a chairlift can often be an emotional process for the customer, who has to accept their own mobility is declining, meaning that making the design and installation as simple as possible is paramount for thyssenkrupp.

The efficiency improvements provided by using HoloLens have also helped reduce delivery times to the customer up to 4x, making the whole process smoother and less stressful for the often elderly clients.

Using HoloLens means that engineers are never left alone when on a repair or maintenance job, and can always call up expert information or input if needed. This has led to major improvements not just in safety, but also in the efficiency of the company’s repairs and products around the world.

"With mixed reality, we can power not just our engineers, but our technicians to help the way people move in cities," Sesma notes.

"The benefits we see are huge."