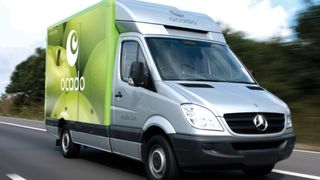 Ocado is the UK’s largest online-only grocery retailer in the UK, shipping out deliveries to customers all around the country in one-hour windows.

Coordinating all of this requires a serious amount of computing power - with Ocado’s giant warehouses running a complex system that ensures nothing is ever missed.

However the company is now preparing a complete overhaul of its warehousing system with the launch of its new Ocado Smart Platform (OSP), which promises to improve efficiency and reduce mistakes all around.

The OSP is the brainchild of the company’s in-house Ocado Technology arm, which develops all the software and processes used by the business, and now numbers over a thousand employees.

But the company is also calling in assistance from Amazon Web Services, which is providing 28 services, from databasing to AI solutions, to help it all run smoothly.

"Our business is all about making this process of online grocery delivery as simple and convenient as possible for our customers - and that simplicity is delivered through an application of a huge amount of technology and automation,” Paul Clarke, Ocado Technology CTO, told the recent AWS Summit in London.

"As the fusion of a retailer and a technology business, we're really in the time travel business - we're about giving customers back the time they would have wasted spent traipsing around a conventional store."

"We had a number of different drivers for moving to the cloud,” Clarke told ITProPortal at a briefing following his AWS Summit speech.

“Even before we decided we wanted to build this new platform, we were looking at increasing the agility for our engineers in terms of the rate of which they could deploy and experiment.

“We're a company that runs on its innovational juices...and so that rate of experimentation, the ability to not have bottlenecks within the organisation. But also when we started to build our Ocado Smart Platform, it was clear that we were going to have to be able to build completely new environments for our retail customers, pretty much at the flick of a switch, and we didn't really want to be building data centres in other countries - that was the point at which we decided to adopt a cloud-first strategy"

So how much of a change is the new Ocado Smart Platform?

“I don't think there's a single line of code in common between our existing platform and the new one.”

The OSP has already begun rolling out to its first customer in the UK, with Morrisons utilising its store pick solution alongside the existing warehousing solution provided by Ocado, with the company also having recently secured a deal for its first international customer.

Clarke notes that the OSP could be a hugely useful tool for traditional retailers looking to get their foot in the door in the online space, offering them a quick and scalable way to start an omnichannel offering.

Looking forward, Ocado is also hoping to further expand not just the OSP, but also the full range of its product offerings.

“Our rate of innovation is faster than it ever was," Clarke says, highlighting how the company’s ownership of its retail business means it gets to drive future requirements, and as it gets more customers on board, these will help enrich the OSP even further.

“It’s a cycle of innovation,” he says, “that's what has got us to where we are.”