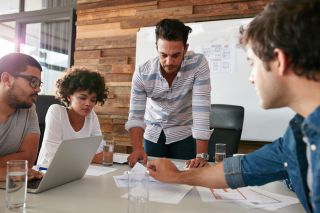 From Battlezone to Grand Theft Auto, video game developers have wielded real-time for decades, using it to create progressively more impressive, interactive game worlds. But today we’re seeing the technology spread further afield: filmmakers are leveraging real-time to create epic sci-fi narratives, meteorologists are using it to change the way they present weather, and architects are finding new ways to design the buildings that they erect around us.

It’s high-time for the advertising sector to get in on the act too. Any design or creative team worth its salt should be performing the necessary R&D to understand how real-time technology can benefit their creative pipelines today.

The issue isn’t one of keeping up. It’s one of falling behind.

Moore’s Law is dead. All hail the GPU

Is the writing on the wall for the CPU? In the competitive world of advertising, success can be about more than quality of content alone. A vast spectrum of images and video, with multiple variations, is vital to marketing efforts in 2018. And GPUs can deliver images significantly faster compared to CPU renderers, making all the difference on deadline day.

Consider the major traditional renderers today – almost all now have a real-time component included. We’re also seeing renderers come onto market like Redshift, which leverage the power of the GPU for insanely fast output. And there are tools like Clarisse iFX that allow for real-time viewport displays of work-in-progress renders – even on assets containing complex geometry of up to 20 billion polygons.

While this may sound like jargon to the uninitiated, there's a clear message within - content creation needs a versatile solution. Creative agencies face demands for more content, more quickly; on a personalised, interactive level. Brands that don’t evolve their approach will fall behind tech-savvy competition.

Consider creative campaign production today. An idea is conceived by an Agency and then produced by a CG production studio. The rendering of that idea, whether stills or motion, can take anywhere from two to two hundred hours. After which the asset is pumped back into the pipeline for amends before re-rendering. Waiting for a full 60 second animated sequence or series of high-res still images is time-consuming and has to be carefully built into the schedule.

Now consider the real-time alternative. Tools like Unreal Engine provide creatives with instant visibility of the results of their creative direction/ input. Rendering speed and efficiency are no longer an issue because there is no rendering speed – you’re working at the speed of thought on an almost-finished product.

Just take P&G for example. According to CMO Marc Pritchard, their focus has shifted "to build the brand through lifelong, one-to-one relationships in real-time, with every person in the world". So if the move for real-time creative is beginning, how does your brand stay ahead of the curve? It's time to reassess the limitation of traditional production methods.

Working in real-time means that creative production studios can make far more informed creative choices, as they’re working on an already-rendered image. And what’s more, they’re also able to work with flexibility – they can quickly explore concepts that may otherwise be abandoned due to time constraints.

Rather than working through asynchronous updates that can cause an artist to lose their creative flow, real-time allows for faster turnaround on requests for change and therefore more creative iteration – something that always results in a better-defined final product.

Furthermore, the work produced has many facets. An automotive render is no longer simply a flat image. It can be viewed in interactive 3D on a website, with viewers empowered to visualise optional accessories or paint colours, swapping them out as they view the model. Or VR could enable users to enter a digital showroom and see the 3D rendered vehicle at 1:1 size, without having to leave the comfort of their own home.

This flexibility and opportunity to experiment is not ‘a nice to have’ option – it’s imperative in today’s competitive landscape, where timelines are tighter, campaigns are integrated across platforms. Expectations continue to rise.

The time for real-time is now

The advances in rendering over the last three-four years have pushed the technology outside of the video game domain; it’s gone from from theoretical to critical. Today, with advances like the introduction of real-time ray tracing, the technology is a viable candidate for replacement of traditional offline renders in the creative production space.

Real-time rendering means smarter, future-proofed imagery produced quickly; with more opportunity for creative refinement and iteration; and more applications post-creation of the initial render. However, there is a significant challenge to overcome – not in the implementation of the technology itself, but in finding the right people to brandish it.

Agencies and creative production studios looking to benefit from the likes of Unreal Engine need to understand that the distance between a video games artist and a VFX artist is, while lessening, nevertheless considerable. The artists of the future must be non-traditional; they must balance multiple skill sets and understand the needs of varied sectors. Finding individuals that deftly walk that line will turn a good creative company into a truly great one.

That's a challenge, but one that those creating high-end marketing imagery must overcome. The real-time revolution is here and it’s already reshaping many industries; from Architecture to Automotive. You must start considering the options if you want to ride that wave.

The days of businesses blasting out catchall images and video are gone. We’re living in a personalised age, where audiences engage most with messages that speak directly to them. Interactive technology and customised content are the best way to stand out from an endless barrage of digital chatter; brand loyalty comes from a two-way conversation, engaging with target customers, and real time rendering enables companies to achieve this more efficiently than ever before.

Robert Moodie, Head of Pipeline and CG at Saddington Baynes