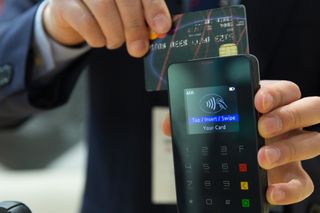 Bank transfers, debit cards, credit cards, e-wallets and mobile wallets: all are used to process the one hundred and twenty-two billion digital transactions made each year in the European Union.

And this staggering figure is expected to rise year on year, meaning the payments industry simply has no choice but to adapt its processes to cope with the increasing number of transactions

Fortunately, if not entirely coincidentally, this explosion in the volume of digital payment co-coincides with the rise of viable Artificial Intelligence (AI). At its simplest, the ubiquity of AI enables digital payments by allowing consumers to more easily buy goods and services through services such as digital assistants or recommendation engines, which run on machine learning.

But this explosion in the number of the digital payments creates a problem which will also need AI to solve. The increase in web-payments, brings with it the unavoidable risk that volumes of digital-payment fraud will also rise. And that won’t simply rise in proportion to the growth of payments as a whole. If we don’t act now, fraud is likely to grow as a proportion all transactions.

Moving from manual to automated processes

By 2020, global merchants are expected to process seven hundred and twenty-six billion digital payments every year. Criminals are not slow to spot an opportunity. The current, largely manual anti-fraud and know-your-customer processes will not be sufficient to handle the volume of digital payments expected in the near future.

If the protections fail, the criminals will step in to exploit that situation. That is why payments is one of the areas showing the greatest interest in AI development. And the good news is that the rapidly rising number of transactions means AI developers have large growing bodies of data on which to train their algorithms.

How artificial intelligence can help the payments industry

A traditional rule-based — and largely manual — fraud detection system tries to spot criminal activity by monitoring a range of variables, such as location, the type of merchant and the amount being spent.

For example, if a user spends more than usual, with an unfamiliar merchant, in a previously unvisited location, then this type of activity would be immediately flagged as a possibly fraudulent transaction. That’s why, if you suddenly go mad and buy something big when you’re on holiday, there’s a good a chance you’ll get a call from your bank.

The problem with this current model and rule base is that it is too rigid to cope with the increased volume and complexity. Only 1.49 per cent of all global transactions are fraudulent, but in today’s highly digitally-dependent world, many purchases do not fit into a rigid rule-based model of fraud detection.

Done well, AI will make the payment processing industry more intelligent, better able to reduce risk, more capable of offering tailored services and most importantly, better equipped to cut fraud.  AI can now perform a task in less than two minutes that used to take a trader 45 minutes. A financial institution, using AI to detect fraud benefits not only from being able to process transactions in real time - something it could not do manually - but also from the ability to recognise the anomalies to successfully distinguish fraudulent transactions from honest ones.

But the industry needs to exercise the highest level of due diligence as it moves to Artificial Intelligence for many previously manual functions. A poorly designed AI could incorrectly categorise customers as high risk, consequently denying them access to a range of financial services. Alternatively, a fraudulent transaction could be incorrectly downgraded as low risk. For example, a payments AI will look at a whole range of factors to assign a risk score to each.

A merchant with a good track record might have a low risk score, for example, fifteen per cent, compared to an unfamiliar IP address, time zone or location, which might attract a higher risk score. This process can be repeated for hundreds of factors, with the final average score determining whether the transaction passes the merchant’s risk score.

Not just a fraud detection tool

While fraud detection is the most common use for AI in finance, it is not its only use. AI can also spot potentially useful or worrying connections and behaviour as part of the know-your-customer (KYC) process, a procedure which allows institutions to process larger quantities of data for a range of sources. These include all customer accounts and other products with that institution and soon, with the advent of open banking, other institutions as well.

Credit scoring is another area in which the industry is already using Artificial Intelligence. Again, the challenge here is to analyse data across millions of accounts to spot patterns which correlate strongly with the risk of fraud. Once AI has been used to derive these models, it can then check individual applications and customers against them, going beyond simple models based on a narrow range of factors, such as past spending and expected income.

There must, however, be some consideration towards the risk that is attached to AI, as it is difficult, to determine its success or set boundaries on how to use it. This is particularly true when it is used for credit scoring - as customers and institutions share their credit scores amongst one another, but ultimately for their own use.

Consequently, AI could prevent people from accessing various financial services due to their innate bias. As a result, a human would have to take control of the situation and intervene, completely eradicating the initial need for AI in the first place. Nevertheless, this issue could be overcome if companies were to meticulously test algorithms to detect bias.

In some functions, AI is predicted to replace or augment humans in the near future, as more and more companies start looking for ways to implement AI into their processes. However, the fear of robots taking our jobs isn’t quite real just yet – so for the moment, there is little reason to worry.

The advantages of AI are increasing year on year and it is undeniably the future for finance. As for the foreseeable future, AI will be making the industry smarter than ever, by serving customers better and finding more customers. It sure is an exciting time to be using AI in finance.