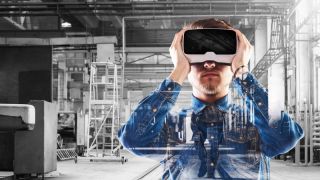 As with everything in the business world, from Fintech and blockchain changing the banking sector  to AI making inroads into customer service across a range of industries, if there’s a problem - the tech industry has a solution.

The potential for virtual reality to transform the gaming industry, or even the travel industry, is well recognised. What if, however, it also has the potential to change something that happens almost every day and in almost every industry in the world? Well it has. VR has the power to transform workplace training in almost all forms, even extending more broadly to mentoring and guidance within business.

The benefits of workplace training have been widely reported, ensuring you have an agile and competent workforce, and potentially leading to happier, more engaged staff. Additionally, studies have shown that effective workplace training also brings in new talent whilst retaining existing employees.

Furthermore, workplace training has evolved significantly in recent years as more organisations move from traditional methods to shift their focus towards emotional intelligence, employee well-being and dealing with issues such as mental health within the workplace.

Those training sessions with the uninspired  questions or awkward and rather unconvincing role plays can now be replaced by a more realistic simulation of the task. VR can revolutionise the way training is carried out in an exciting and innovative way. Providing a controlled environment which is both detailed and realistic. This  will not only improve engagement during training but also help towards retention of crucial knowledge.

Ultimately, it will be more convincing than an exercise on paper, and less costly and wasteful than carrying out a task before you’re appropriately trained. It might even mean the difference between life and death in the case of training medical professionals.

VR has the potential to  be a more effective, enjoyable and engaging way of training people within the workplace – leading to happier, more confident and more qualified employees in a shorter time-frame with little or no risk.

This potential isn’t just limited to traditional employer-employee interactions. As an investor and  mentor, I see pitchers at both ends of the deal. I judge those pitching their businesses to me for investment, as well as advising those going out to pitch their business to potential clients and customers. In the current environment, I tell those I’m mentoring to clearly map out, either on paper or in their heads, the key points they wish to get across, and to understand their business from the point of view of their investors or their customers.

There’s a world of difference between practising your pitch in front of a mirror or even your friends, and getting in front of a real-life investor with the potential to change the future course of the business. Virtual Reality, possibly combined with increasingly developed AI, has the potential to change all that – simulating real life board room situations and pitches to prepare entrepreneurs for those 20 minute meetings which can often completely change careers.

While testing and QA aren’t exactly workplace training – doing a better job of testing lets you feedback to create better practices in the future. And testing is an area where VR can make, and indeed already has made a huge splash.

Using VR, or AR, to test the design of a product ‘in practice’ is something NASA, and a vast array of other engineering companies, already do.

This will only expand in the future, allowing greater feedback and thus indirect as well as direct training.

So why hasn’t it taken off yet?

VR technology is still relatively new, at least in the mainstream, and it also takes time for businesses to adapt. In addition, whilst the technology has huge potential it also has significant limitations – not least of which is the cost! Exploration of these drawbacks in more depth will offer an insight into when, and more importantly if, VR will gain a staple place in workplace training.

Too New? Just a Gimmick?

One problem is simply that the technology is very new – companies producing the tech are still figuring out how they want to use it, let alone those who will need to integrate the technology into the daily workings of their businesses.

With this lack of clear understanding how the technology can fully integrate into the daily workings of a business, it is often perceived as more of a gimmick at the moment, both because of its novelty and because it does almost seem too good to be true. However, it might also have something to do with the current drawbacks of the technology itself, and also its off-putting cost. We are going to look into these larger concerns below.

If I Can’t See You, I Can’t Train You

It is important to note that the technology isn’t all that practical yet, especially for training purposes. Would you want to give an important presentation with a large and extremely cumbersome headset on? This isn’t just a problem in that it might put off the trainee, or individual being mentored; it also means that the person doing the mentoring won’t be able to effectively assess them. Current VR headsets cover half  the face, and with no ability to see the wearer’s eyes it can be difficult to track facial expressions determine engagement levels.

Google has made some headway towards solving this problem. They recently revealed an ‘invisible’ VR headset, a solution they were particularly excited about, commenting in a blog post that:

"Headset removal is poised to enhance communication and social interaction in VR itself with diverse applications like VR video conference meetings, multiplayer VR gaming, and exploration with friends and family. Going from an utterly blank headset to being able to see, with photographic realism, the faces of fellow VR users promises to be a significant transition in the VR world, and we are excited to be a part of it."

How much? How long?

However, for the purposes of using VR in everyday businesses they really haven’t solved this problem. At least not yet. This ‘invisible’ headset means creating a 3D model of the user's face, requiring a ‘colour and depth’ camera, before utilising a synced 3D camera and a green screen background. And all of this is not only inconvenient, but incredibly costly.

What this step does establish though is that there is real push in the VR direction from a whole host of tech giants, not least because of the possibilities VR could offer once certain problems have been resolved.