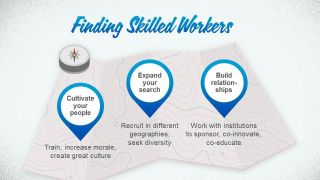 This is the second in a series based on Maciej Kranz’s recipe for IoT success. You can read the first article here.

Over the past several months we’ve heard a lot of noise in the media about the loss of jobs in manufacturing, mining, and other traditional industries. I believe, however, that it’s not so much about job loss as it is about changes in the kinds of jobs required in the new industrial environment.

Automation and the Internet of Things (IoT) are driving a major technology and business transition that affects both processes and people. While automation and more efficient processes may eliminate some jobs, IoT is creating many new job opportunities—from data scientists, to remote operators, to application developers. The fact is, in the United States and Western Europe there are tens of thousands of manufacturing jobs that are not filled each year because there are not enough qualified candidates. As the IoT-based economy drives trillions of dollars in economic growth, some industries merge and new ones are created, there will be a worldwide scramble for the same IoT-capable workers.

How can you fill these new jobs?

Start by cultivating your own people

Invest in your employees to help them grow new IoT skills. This is job one for every company starting on the IoT journey. Creating an IoT-ready workforce is not a one-time training event. It is a mindset change. A new way to run your organisation. A new contract between your company and your employees. The model of performing the same job that changes little for 10-20 years is gone.

Today, people have to navigate a dynamic landscape where they need to reinvent themselves every three to seven years to keep up with fast-changing IoT skills. This requires a mindset of continuous learning—for both employees and companies. IoT is a journey, and so is learning the skills it requires.

Next, expand your search...

... beyond the usual places. Of course, continue to engage with four-year colleges and universities, but also check out community colleges, and even high schools. Rockwell Automation, for example, runs a summer internship program for high-schoolers. Many IoT jobs can be performed remotely, so don’t be tied in to an arbitrary geographical location, or rigid working hours. Smart devices, accessible technologies, and ubiquitous broadband can also open up a vast untapped talent pool—roughly a billion people in the world with disabilities. An inclusive, accessible approach will bring you a greater range of qualified candidates while broadening participation in the IoT-led economy.

Engage early and comprehensively with schools, veterans groups and industry organisations. Sponsor research, offer internships, and initiate joint projects. Consider co-developing curricula with these institutions. If you need more data scientists, partner with a college to develop such classes, then sponsor them. Be creative. Look at the example of Siemens, which needed more mechatronics experts in its North Carolina facility. So it partnered with a local community college to create a unique four-year apprenticeship program combining on-the-job training with a structured curriculum.

The good news is that the industry is coming together to address the shortage of skilled IoT workers. Recently, Cisco, Rockwell, GE and several other organisations have formed the IoT Talent Consortium—a nonprofit organisation dedicated to preparing the first generation of IoT-ready workers.

These are only some of the ways to build “Generation IoT” in your organisation. This is a new generation of leaders, makers, thinkers, and doers shaped by the transformational power of IoT-driven processes, business models, and revenue streams. Generation IoT is first defined by openness—open standards, open collaboration, open communications, and open, flexible business models. Members of Generation IoT can be found in IT or operational technology (OT). They can be young or old. All are willing to learn and take risks, and are good at building virtual teams internally and partnering externally. You can recognise these new winners not by their age or their titles—but by their ability to build and deploy agile, flexible business solutions.

Developing an IoT-enabled workforce is not an option—it is a must. If you focus on developing new skills for new roles while preserving legacy expertise, you’ll be building Generation IoT—a workforce ready to take on the dynamic challenges of the IoT economy.

Next time we’ll look at the third ingredient in my recipe for IoT success: Focus on solving real problems.

Strategic innovation in the digital age is powered by people connected to the Internet of Things (IoT). Maciej Kranz has written a definitive guide on how to implement and capture the unprecedented value of IoT. The first of its kind, Building the Internet of Things,” gets past the hype to guide organsations across industries through the IoT journey.