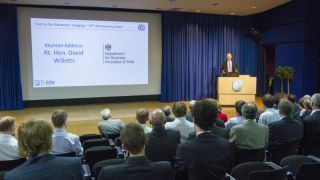 This year marks the 30th birthday of the Microsoft PowerPoint name. Love it or hate it, it’s the most common presentation tool used globally. Although it’s difficult to put an exact figure on it, it’s estimated that 30 million presentations are created every single day. Microsoft claims that PowerPoint has been installed a billion times, while other figures suggest it’s used an incredible 350 times every single second.

PowerPoint is ubiquitous as the software to educate, engage, sell and inform. It’s not just for corporate use either – take for example, the pioneering 13-year-old who used PowerPoint to persuade his parents to let him play Grand Theft Auto, or La La Land actress Emma Stone who recently revealed that she used the software to convince her parents to send her to Hollywood aged 14.

But the platform is often misunderstood and misused. All too often we hear the phrase ‘Death by PowerPoint’ when we see slides jam packed with words and complicated graphs. It doesn’t have to be this way, but you do need to know how to use the tools correctly to make the most of the software. You can’t give a four-year-old a box of crayons and expect them to create a masterpiece and it’s the same with PowerPoint - without the right knowledge, your presentations won’t be masterpieces either.

With the right design and some simple presentation skills up your sleeve, you can create real impact. So, as we reflect on PowerPoint turning 30, how does it stack up against other presentation software in the marketplace?

Prezi is one of PowerPoint’s main competitors. Founded in 2009, it markets itself as a “very different kind of presentation software”. One of its biggest selling points has been its ‘‘limitless zoomable canvas” feature, which lets you jump to and from specific slides and areas of your presentation. The software utilises motion, zoom and spatial tools to bring presentations to life. Interestingly, Microsoft recently added this feature to PowerPoint, realising how important it was for users to be able to access detail on demand, rather than flip through an entire slide deck.

Prezi is a great way to tell a story in a non-linear fashion, but the challenge is to plan the presentation and overall design in such a way that it makes sense to the viewer while visually telling a story. There’s no doubt that Prezi has some nifty features but it simply can’t match PowerPoint for reliability and user friendliness.

A subscription to Prezi’s more popular ‘Pro’ option is £15 a month.

Next up, let’s look at Keynote, Apple’s creation which goes by the tagline “Beautiful presentations for everyone”. Keynote integrates with Apple’s ecosystem so you can create slides on a Mac and use it on an iPad or iPhone. As a system, it’s user friendly and the presentations themselves have a slick look and feel. If you’re looking for something quick, easy and eye-catching, Keynote works well and there are a number of default themes you can use.

Keynote’s downfall, when compared to PowerPoint, is the limitations it poses. Whereas PowerPoint has a wealth of features to explore and make use of, Keynote is more restrictive. Its features are more focused around simplicity and ease of use – for example, set theme options, a master slide guide and multimedia friendliness. PowerPoint however has a raft of features which, when used correctly, can be phenomenal – everything from making slide-decks act like animated websites to creating animated sequences and sophisticated on-page menus to navigate the presentation.

Painting on a blank canvas…

For the non-creative, the blank canvas of PowerPoint can feel overwhelming. Sometimes it’s almost too easy to do things and get carried away. It can really pay off therefore to work with a design agency to create a powerful and impactful slide deck. Once created, it’s simple to manipulate too, so it doesn’t mean you have to get every single presentation designed separately.

Where PowerPoint stands apart from the likes of Prezi and Keynote is its vast functionality. For example, a new feature allows users to insert a 3D model into the presentation. Imagine you’re standing in front of an audience presenting the engine model of a new car. A 3D animation of the engine gives you the power to control it on screen, rotating and spinning the model to show it from every angle. This level of interactivity means you can engage the audience and tell a more engaging story to capture their imagination.

Tech and the future of PowerPoint

Tech is also changing the way we present and allowing us to do things that may not have occurred to even the most innovative presenters 30 years ago. Take augmented reality, for example. Headsets can be worn by the audience so that the surrounding space, including the furniture, can be used as the ‘canvas’ for your presentation. The audience can be taken beyond the screen and can walk through a presentation with you. With the VR and AR market expected to reach $150 billion by 2020, headsets like these will become more commonplace in presentation situations, giving new ways to share your ideas and truly immerse your audience.

Wearable tech is another way a presentation can be transformed. Tech such as Myo armbands allow slides to be controlled using muscle movement in the presenter’s arm. This gives presenters the freedom to walk around and control presentation software touch-free. The tech also allows you to control a digital pointer and zoom in on slides.

The likes of Prezi and Keynote may suit certain uses - not wanting to pay for software for a one-off presentation perhaps - but, in my opinion, PowerPoint has much better functionality and depth in what it offers. Rather than looking at a quick-fix presentation, PowerPoint can offer a host of innovative features and offers a level of professionalism that is second to none.

The presentation software leader has graced projectors for more than 30 years. Will it still be around in another 30 years? I say, absolutely.