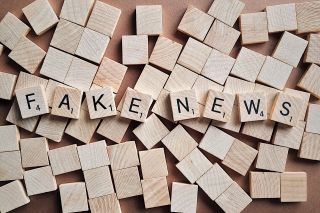 Fake news itself is nothing new, but the internet and social media has made it cheap and easy to perpetuate, making it a potential threat to democracy while denting trust in the mainstream media.

Fake news is dreamt up and put out to resemble credible journalism to attract maximum attention and manipulate its readers. These so called news stories can be used to push political agendas, spread propaganda and deceive its readers. Governments are already making a stand against fake news. Malaysia has just passed a law against fake news ahead of its election. Such laws, however, could threaten free speech on a global scale, according to campaigners. Many believe it is the actual technological framework that should be looked at to stem the flow of fake news.

There is little doubt that technology helps fake news spread like wild fire. As technology advances so do the ways misinformation can be churned out. Social media and its crowd dynamics, for example, provides a platform that actively encourages sharing.

In a talk with TED Curator Chris Anderson, investigative journalist Christiane Amanpour warns that we need to be careful where we get our information from. “Unless we are all engaged as global citizens to appreciate the truth, who understand science, empirical evidence and facts, we are going to be wandering around – to a potential catastrophe,” she says.

Ironically, however, technology may be the tool for proliferating fake news – but it may also be the tool to stop it in its tracks.

Technology may enable fake news, but surprisingly it can also be the answer to curtailing it. Graph databases, capable of analysing gargantuan amounts of data and uniquely pull out connecting relationships has the innate power to probe fake news.

Graph technology was used by investigative journalists to trawl through terrabytes of data and leverage connections to produce the infamous Panama and Paradise Papers. With Google using knowledge graph to enhance its search engine capabilities and map out the web, it is easy to understand why graph technology could also be a swift remedy to filtering out fake news.

By using a number of machine learning algorithms to build and feed a “news graph”, this can be used as a foundation for analysing news from multiple perspectives. This provides additional insight into the inclinations and credibility of individual news articles and their sources.

The tale behind the Russian trolls

There is no secret behind the fact that Russian operatives cleverly utilised Twitter and other social media platforms in a bid to influence the 2016 US presidential elections cycle by pumping out fake news, for example. The big questions is how did they manage it.

Following the US presidential elections, the House Intelligence committee released a list of 2,752 false Twitter accounts that were believed to have been operated by a Russian troll factory, called the Internet Research Agency. Twitter responded swiftly, closing the accounts and removing the Tweets.

Despite the accounts and Tweets being taken down, journalists form US broadcast giant NBC News were able to put together a subset of them. They used graph technology from Neo4j to analyse this data to make sense of what the Russian troll factory was up to.

NBC News used the graph technology to highlight hidden connections between accounts, posts, flags and websites. By putting together a picture of these hidden connections, reporters could see the patterns behind the fake news. NBC News used the data to expose how these Russian accounts were impersonating every day Americans, drawing hundreds of millions of followers, to circulate propaganda.

So how did the Russian Troll network manage to pull off this fake news campaign? Firstly, the group behind this were small. They worked to develop Twitter accounts using common hashtags and posting reply tweets to popular accounts to gain traction and followers. In one account, for example, of 9,000 Tweets sent only 21 were actually original.

By analysing the data using graph it was found that only around 25 per cent of the tweets were created, the rest were re-tweets, specifically designed to broadcast the messages to a wide an audience as possible. Whilst some accounts posed as real-world Americans, others took on the guise of local media outlets and political parties.

When graph was applied to analyse the retweet network, it showed that they formed three distinct groups – one tweeting mainly about right-wing politics which hashtags such as #TrumpTrain, a second group with more left leanings, but not all positive. They threw up hashtags such as #RejectDebateTopics. The final group covered topics in the Black Lives Matter community, with hashtags ranging from #racism to #BLM. The number of tweets averaged 7 per day.

It is obvious that social media platforms and governments must make a stance against social media before it topples the status quo. The answer is being able to pinpoint the kind of connections that NBC News found in the Russian troll factory’s campaign. It is impossible for humans to spot these relationships in a huge dataset without the right tools. Graph makes sense because it was specifically designed to analyse data in this way.

Secondly when looking for connections within data sets it is paramount that the patterns of behaviour are understood in the pattern it produces. In the Russian troll factory, for example, a simple graph algorithm called PageRank was able to map how the small, but single minded, group worked.

By joining the dots and analysing datasets like the one produced by NBC News, governments and social media platforms can use graph technology to proactively detect and prevent fake news from haemorrhaging across the globe. A simple answer to an escalating problem!