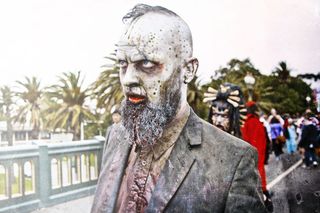 Networks are growing rapidly and becoming more complex, yet IT teams are likely digging their own graves by still using manual processes for managing key IT workflows like network documentation, troubleshooting, change management and cyber security – to name a few. With Halloween just around the corner, I was reminded how the tedious and time-consuming nature of these tasks can certainly induce a zombie-like state of boredom. So how can you cure a team of walking dead network engineers? Automation.

Without automated processes, IT teams will continue to kill themselves with current methodologies trying to keep up with core requirements such as cross-IT collaboration, network visibility and the need to streamline tasks, but will still continue to fall short. Here, I explain how traditional management strategies are turning IT teams into zombies and how automation will be the key to bringing them back to life (no brain eating needed).

We are at a crossroads in networking, where traditional networks are found few and far between, and hybrid network environments are becoming the norm. As today’s hybrid networks continue to increase in complexity due to an abundance of new connected devices and implementation of technologies like DevOps, SDN, NFV, and intent based networks, the visibility necessary to properly manage the network is becoming more and more difficult to achieve. Network documentation is critical to achieving this visibility, but manually doing so is far from an exciting task and is where the zombie virus begins to show its first symptoms. According to NetBrain’s State of the Network Engineer survey, 87 per cent of network engineers said they primarily rely on manual techniques to create and update their network diagrams. Manually documenting a network can take hours and many sleepless nights, leading to slower troubleshooting, prolonged security impacts or lack of compliance – not to mention the utter frustration experienced by engineers. This process takes so long, that often once it’s complete, the diagram is obsolete and IT teams are forced to start the process again.

However, when done right, network teams can derive an incredible amount of value from having accurate and up-to-date network documentation – from saving time during troubleshooting to visualising different areas of the network for service expansion to isolating an attack. With the help of automation, network engineers can effectively keep their network documentation perpetually up-to-date.  Automated documentation allows network engineers to document their entire network on demand and create dynamic maps that update automatically each time there is a change to the network. When automation relieves the zombie symptoms caused by tirelessly mapping the network manually, engineers can focus on critical workflows like troubleshooting and change management.

Zombie cause number 2: IT team silos

Collaboration and information sharing are often the difference between quickly diagnosing a problem and hours of frustration and downtime. However, due to the all-too-common silos among IT teams, speed to resolution is often hampered. In addition, today’s troubleshooting processes are largely dependent on senior engineers’ institutional or “tribal” knowledge – whether that be relying on an engineer’s mental picture to create a network diagram or going to the IT expert to troubleshoot advanced configurations. As a result, level one engineers often don’t have the ability to effectively identify and mitigate a problem and are forced to escalate the issue to a level two or three engineer that must start the whole diagnosis process over again. Duplicating diagnosis processes again and again is bound to turn anyone into a Resident Evil-level zombie.

Network teams’ inability to codify and share best practices also affects their ability to secure the network against increasingly common cyber threats. Given the quick response necessary to mitigate cyber-attacks effectively, this is especially concerning. Whether it’s a denial of service attack or the need to harden firewalls to mitigate ransomware threats, the ability to digitise and rapidly disseminate best practices across network and security teams is vital in defending against future attacks.

By automating troubleshooting and mapping processes, IT teams can better collaborate and share information and best practices quickly, eliminating the all too common silos among teams.

Ensuring network uptime is priority number one for most engineers. But while troubleshooting is one of a network engineer’s most critical workflows, many are still relying on multiple manual diagnoses, making it truly a nightmare scenario. In fact, NetBrain’s State of the Network Engineer survey found that 71 per cent of engineers turn to the command-line interface (CLI) as the primary way to troubleshoot problems. This route often leads to longer mean time to repair (MTTR), as they may lack the necessary visibility to quickly identify and mitigate network issues.

Network downtime has the ability to cripple an organisation, putting even more pressure on network engineers to quickly diagnose and mitigate an issue. With manual processes, engineers again can experience zombie-like symptoms by spending hours or days searching for a needle in a haystack, so to speak. In fact, about 80 per cent of MTTR time is spent trying to identify and locate the problem, while only 20 per cent is truly spent on repair. For enterprises, automation reduces the number of repetitive, time-sucking steps a human is required to perform troubleshooting by hand. The right tool can zero in on a network problem with pinpoint accuracy and at a speed that no human can match when troubleshooting by hand. Automated solutions are imperative to provide improved visibility while streamlining network tasks, helping to drastically reduce, or even eliminate extended and costly diagnostic repair periods.

With the manual nature of traditional network management strategies, coupled with the rise of hybrid network environments turning IT teams into the walking dead, network engineers – like everyone else – are looking for ways to simplify their lives – whether for troubleshooting, securing, or provisioning their networks. Automation has the ability to do just that – serving as the zombie cure IT managers have been searching for. By automating time consuming, tedious tasks, network engineers are freed up to perform more valuable workflows – and maybe feast on their favourite Halloween candy instead.