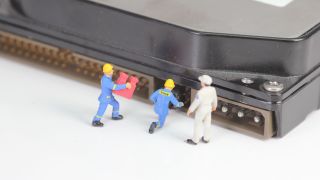 Things move quickly in today’s digital, ultra-connected world. Be it moving operations to the Cloud, digital transformation or even just keeping up with the latest technology, it’s not surprising that in a recent study by Dell Technologies, over half (57 per cent) of global executives said they struggle to keep up with the pace of digital change.

The problem is that digital is now at the heart of most business operations, meaning every time something becomes out of date, all parts of the business are impacted – from marketing through to operations. This digital shift is not only a technically difficult talk, but it’s time intensive too; requiring skilled individuals with both a business management and a technical background to spearhead the project, and push forward change throughout periods of extreme complexity.

This boon in digital projects has also had another effect – the creation of a new C-Suite position – the Chief Transformation Officer. The creation of the CTO reflects just how much time and effort firms are putting into projects such as digital transformation, with market figures reflecting this also. IDC estimates that global spending will reach almost $2 trillion on digital transformation by 2022, with it set to reach a staggering $1.7 trillion by the end of this year.

This is where the good news ends, however. Despite firms ploughing such significant resources into digital projects, many are failing to achieve their digital transformation goals. Forbes once estimated that 84 per cent of digital transformation projects fail, and according to AppDirect’s recent research, 90 per cent of the businesses surveyed revealed that they were facing significant obstacles to digital transformation success. As well as this, IDC’s UK report found that over half (59 per cent) of organisations questioned were described as being stuck in the early stages of DX maturity, or what IDC calls a “digital impasse”. So, what is holding companies back?

Legacy IT – the Daenerys Targaryen of monitoring?

One of the biggest barriers to digital transformation success is legacy IT. Despite its prevalence in many organisations due to inherited IT infrastructures, few have managed to successfully overcome it. Each new CIO or CTO may never fully comprehend or gain a full view into the extent of the different IT systems that are running on the network. This makes it almost impossible for IT teams to successfully manage the migration over to new technologies and then to implement digital transformation projects, as legacy remains a blocker.

The issue remains that it wields significant power as it holds vital pieces of information, yet it’s also a destructive force, by failing to integrate with new technology. Much like the Seven Kingdoms, legacy systems are a hotchpotch of disparate and decentralised entities – for example, virtual machines, hybrid cloud accounts, IoT endpoints, physical and virtual networks and much more. What’s more, many of these are outside IT’s fiefdom, creating more opacity and complexity due to siloed data sets. IT also has its own politics to oversee, including dedicated and proprietary servers that support a critical business application such as AS400, Mainframes and open VMS. However, these systems do not integrate with each other, let alone support the new innovative technologies that are implemented as part of digital transformation initiatives.

The siloed and limited functionality of legacy IT also increases the risk of security vulnerabilities and IT downtime. For example, the UK government provides a key example of the damaging effects that legacy technologies have on digital transformation projects. An IT outage occurred earlier this year that lasted several days at the Ministry of Justice, despite the government investing £1bn into digitising the courts. Outdated, legacy technology was one of the main causes of this disruption. Following this incident, cabinet office minister Oliver Dowden MP stated; “Government, in common with almost every organisation, including the most cutting-edge organisations like Google or Facebook, struggles to a certain extent with legacy systems”.

Whilst Dowden continued to say that removing and replacing legacy systems was the Government’s overall strategy, for many organisations, this is simply not possible. Legacy remains a core function for a significant proportion of businesses and is too connected to business-critical servers. A ‘rip and replace’ attitude is therefore unfeasible as the risk of potential downtime, combined with disillusioned customers makes for an unattractive prospect; even for those with the financial capital available for a digital overhaul.

How to tame the dragon – keep an eye on it

Whilst legacy may cause sleepless nights or potential fireworks, it does not need to be the case. If the problem can’t be resolved, then a strategy needs to be implemented to tame the proverbial beast. A change in attitude is needed, with firms thinking how legacy IT can be modernised and integrated into the network to revitalise the system and breathe new life into the infrastructure.

To conquer legacy IT’s failures, IT teams must ensure that they have full visibility into the heart of the network, enabling the identification of unusual activity and problems triggered by legacy IT in real-time. If CIOs can tame the beast, instead of firefighting – taking a prevention rather than a cure approach – then the risks of legacy IT can be minimised.

Centralising monitoring is the only way to do this, as it shows what is going on, when. This should also be done through a single pane of glass, meaning one version of the truth is relied upon. According to Enterprise Management Associates (EMA), a large number of organisations use ten or more monitoring tools – incredibly poor practice. Each monitoring tool provides a different, fragmented view of the network, from which little value can be derived. The result was that IT teams took on average between three and six hours to pinpoint performance issues. The old adage rings true – time is money – and firms are haemorrhaging this by failing to implement best practice.

Eliminating tool sprawl and adopting the single pane of glass will ultimately allow businesses to gain a view of their digital kingdom, depicting system health, availability and capacity. Only then will CIOs gain data-driven insights which produce value to the business, influence business transformation projects and tame the beast that is legacy IT.

Topics
legacy IT
cio
technology
it
Get Weekly News and Analysis