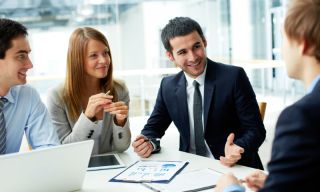 It’s an experience that’s all too familiar for those of us who work in offices. Walk into any meeting room, anywhere in the world, and you’re guaranteed to come across an iconic three-legged conference phone sitting in the middle of the table. Although, at times, the experience can sometimes be confusing, that device is also a lifesaver and an important part of running a business.

Need an urgent status update between teams that are in different locations? Arrange a call. Lacking the travel budget to hash through the details of a new project, face-to-face? Arrange a call. Setting up an extra office and planning to install state-of-the-art video conference technology? That’s fine – just don’t forget about your traditional conference phone in the meantime, as you will no doubt be using it to get things organised.

Despite advances in email, chat and video, the group audio call still holds a unique place in daily business communication. It’s quick, efficient and cost-effective – necessary traits for any pan-generational and multi-platform working environment. Particularly when employees may not naturally be au fait with the latest technology.  Another consideration is compatibility and interoperability of telephony systems within rich-tech and multi-tech environments.

Conferencing through the ages

Conference calling technology, as we know it today, is a relatively recent addition to the history of human-to-human communication. The first one-to-one transcontinental telephone call was achieved in 1915. However, it was another 30 years before the inaugural group-to-group call would take place. Bulgarian inventor Assen Jordanoff configured a telephone so that it could wirelessly transmit audio via a loudspeaker. The result was a success – multiple people could hear the same voice at the other end of the line.  The initial concept of conference calling was born.

It wasn’t until the early 1960s that the idea of teleconferencing within a business context really took hold. In 1956, Bell Labs worked on an early prototype of a conference telephone. A few years later, AT&T gave it a go. They came up with what they called a Picturephone and publicly exhibited it at the 1964 New York World’s Fair. It proved to be technological breakthrough. However, the physical bulk of the device meant that it failed to attract support from corporate America.

Fast-forward to the birth of the Internet and web-based software. Conference phones begin to look like what we are familiar with today. Streamlined, desk friendly devices that are ubiquitous in meeting and huddle rooms around the globe.

The conference call is a necessity born out of the way we work. We may be able to email each other. But who wants to be part of a long and potentially confusing message thread? When more often than not a quick discussion on the phone will suffice. We may be able to instantly message, but is it really that instant? Typing coherent sentences requires time and some nuance. The meaning and context can at times be unintentionally traded for speed. We may be able to video call, but setting one up often requires more IT skill and planning than it’s worth. Time is money and money is time. In today’s fast-paced global business landscape there is little to spare of both.

Despite its importance, conference call etiquette remains something that is only loosely adhered to. While many workers know what they should and shouldn’t do, bad habits seem hard to shake – whether it’s multitasking, accidental muting, inconvenient scheduling, the inability to silence a loud child, or pet, in the background. Not to mention people failing to introduce themselves as they join a call, extended periods of small talk, talking over one another, or turning up to the call late, or even worse unprepared.

These traits can be both funny and irritating. Which is what makes conference calling so popular and engaging. In a world where business tends to be global and flexible working is fast becoming the norm - the ability to collaborate with colleagues quickly and efficiently is essential to getting a job done well. This is why the conference call matters and why it always will.

We all remember the live BBC interview in 2017 with an expert on politics in the Korean Peninsula whose children burst into his study, instantly becoming an Internet sensation. For many, that was a defining moment in video conferencing history as they could instantly relate to the day-to-day challenges of working from a home office.

As flexible working increases across the enterprise, we increasingly find ourselves entering previously personal spaces of people we work with. A video conference can take us into their lounge or even their garden, and it forces us to think about where we hold our calls when working flexibly, what we wear, what’s in shot and – of course – how we behave.

Video conference has, for example, helped reduce the burden of email for many. Polycom’s 2017 global study of more than 24,000 professionals looked at conferencing activity across 11 major countries and found that more than one in three (38 per cent) dramatically reduced the email activity after adopting conferencing technology. More than a third (35 per cent) say they make decisions quicker when conferencing, and half of us (49 per cent) consider more carefully the tone of their emails.

There are some key “vidiquette” (video etiquette) things to consider as we use video conferencing more and more:

-       Don’t wear checked shirts: they could wreak havoc with your colleagues’ screens. Solid colours, broad stripes or subdued patterns work best on video conferences. You want people to focus on your ideas, not your clothes!
-       Keep the video at eye level, so people don’t look up your nose
-       Remember you’re on camera at all times: use the mute button when you’re not talking and be mindful of your body language and what message it sends. Some huddle room technology provides a 360° view of the space, so you may always be in view. Act as you would in person
-       Make sure whatever is in the background is as professional as you are
-       Keep the light in front of you so you don’t become a backlit silhouette
-       Pay attention to whatever is on your desktop if you’re sharing content

The conference call is definitely becoming less formal and truly building engagement and collaboration between people across the globe, transforming the way we work. But we need to make sure that our corporate culture, protocols and IT support evolves with emerging conferencing technologies, so IT needs to work alongside HR and key decision makers on the board to fully realise the benefits of collaborative conferencing.