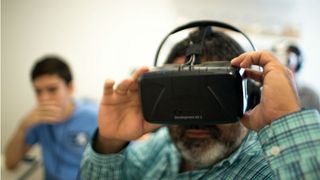 Thomas Edison once said, “Just because something doesn’t do what you planned it to do, doesn’t mean it’s useless,” and history has proved him right. When originally invented, gunpowder was an insecticide, Viagra was a treatment for heart disease and nitrous oxide was used as a recreational drug for 72 years before it became a medical anaesthetic. Continuing in this noble tradition, one of the biggest technological developments in the pipeline for business is one that consumers are already going crazy for, but for a completely different reason.

From consumer fad to business revolution

For a generation of gamers, virtual reality (VR) has opened up a whole new world of potential, lauded for its ability to make visual experiences more immersive, detailed and real. As a result, VR revenues are set to more than quadruple over the next few years with the industry forecasting upwards of $7.9bn of gaming fuelled spend by 2020. In the business world however, it’s a different story.

The corporate inertia around VR is driven by a deadly combination of factors, both practical and cultural. The majority of businesses tend to sit in the ‘early majority’ or ‘late majority’ camps of tech adoption, awaiting practical examples and valuable lessons from the ‘innovators’ and ‘early adopters’ who are currently experimenting with their own bespoke applications of VR, adaptable as it is to each unique business structure.

VR is also quite daunting, both logistically and culturally. It has the potential to disrupt large areas of corporate analysis and decision-making and replace traditional methods. The ‘norm’ may no longer be fit for purpose in the modern day business environment, but we have nevertheless come to trust and depend on some tech approaches wholeheartedly (like spreadsheets and hard and fast figures).

The problem is that the scale, depth and complexity of business data has already moved well beyond the scope of rows and columns, and our need for information has evolved beyond a simple number or percentage. It happened a while ago, but we have laboured on, using what has until very recently been arguably the best tool available. A simple spreadsheet is extremely useful for presenting revenues and targets, but when it comes to understanding more complex topics like risk and opportunity, it can leave us wanting.

To overcome the limitations of spreadsheets, we end up consulting diverse and incomplete information in a variety of formats in the hope of forming a more complete picture in our minds. But inevitably this independent piecing together of scraps of connected and unconnected data is a poor substitute for effective tools. VR therefore can and should be viewed in the context of a long-term trend in the way that businesses use technology. It’s one that revolves as much around neuroscience as it does hardware.

Humans have evolved to identify and recognise visual patterns and react accordingly. We make decisions dynamically based on what we can see and sense around us. We did not evolve reading rows and columns in a grid, and as a result we reach the limits of that data model very quickly.

VR is a far more natural interface through which our minds can connect to information than a 2D arrangement of numbers. It allows us to process vastly more data points than traditional methods, and more quickly. We can identify complex patterns and relationships in our visual data landscape and make decisions as we have evolved to do – and inevitably make better, more informed decisions.

In fact, it’s possible to reframe the inevitable march of corporate progress as a journey towards aligning technology with the user and bridging the gap between our understanding of the intricate workings of technology and our ability to use it. The human brain is the most complex and powerful structure in the known universe, so it makes sense to work with and harness that power, rather than asking it to conform to the rigours of the spreadsheet.

The age of the metaphor

More specifically then, how does VR help us to understand information?

At one end of the spectrum there is the relatively simple (visually, not scientifically) world of medical visualisation. 3D images and video representations from CT scans have already proven themselves an invaluable part of the treatment and diagnosis of a plethora of conditions, allowing surgeons to not only see inside their patients without the use of a scalpel, but to project post operative outcomes and foresee problems that before would only have emerged in the urgency of the operating room.

For business data, virtual reality allows us to go even further, moving into the world of metaphor. For example – bear with me here – take the metaphor of a landscape or a seascape as a reflection of the world in which a business operates. Shoals of fish could represent benign groups of stakeholders. Sharks could represent hostile actors that pose risk to the business. Meanwhile the coral reef could represent the underlying reputation of the company and how it is perceived – perhaps thriving or struggling. This metaphor, viewed through a VR headset would allow the user to zoom in, look around and go into as much detail as they liked within any one part of the reef, breaking down the data and viewing it at any level to discover everything they need to know.

The road to the boardroom

If it were really as simple as all that, then why are boardrooms not already teeming with virtual sea life? The challenge is less one of technology and more one of familiarity and trust. Taking a radically new approach to information processing and representation means not just embracing some very new ways of working, but also letting go of some very established ones.

One of the potential downsides of VR is that it can feel disassociated with the hard numbers, if the chosen metaphor seems to trivialise certain data or give undue weight to others. But this challenge is also potentially a strength in that it allows executives to calibrate the experience to reflect different risk appetites, for example choosing a ‘business as usual’ lens or a ‘business disruption’ lens.

Without doubt it’s a very new way of approaching data, and one that will take some adjusting to, but like all the technological revolutions of the past, to the early adopters go the spoils. As the Gartner Hype Cycle clearly demonstrates, for VR, there really is no time like the present.