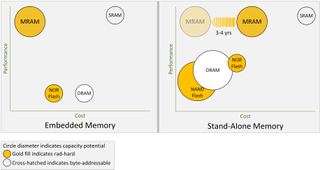 We generate data at an accelerating rate, and we need more space to store it. While memory was once scarce and expensive – meaning every byte was carefully considered, today the mantra is, “Memory is cheap!” And so we blithely throw terabytes of data into memories with scarcely a thought.

That might suggest that we have all the memory solutions we need, but today’s primary memory technologies – as well as they have served us – all have drawbacks. They get the job done, but they leave us wanting more.

We use these memories both in dedicated chips that can leverage custom processes and as memory blocks embedded on systems-on-chip (SoCs) using standard CMOS processes. None of these three works equally well in both embedded and stand-alone implementations.

Because these memory types have limitations, there has been an ongoing search for new approaches to storage. Of the relative newcomers, magnetoresistive RAM, or MRAM – close to production – does the best job closing the gaps left by the incumbents.

The incumbents – good and bad

While each memory type has its niche, a closer look reveals where they fall short.

The memories discussed so far all rely on storing electrical charge in some fashion. Magnetoresistive memory, by contrast, uses a magnetic layer to store a bit. A single large version of such a cell has been in use for a long time – in the read heads of hard disk drives. That version, however, is not well suited to densely packed arrays of cells, and so further work has yielded more compact cells suitable both for stand-alone chips and for embedding.

The bit cell consists of two magnetic layers. One has a fixed polarity; the other can have its polarity set either parallel or anti-parallel to the fixed layer. If both layers are polarised in the same direction, then the current tunnelling across a barrier will flow relatively easily. If the layers are in opposite directions, then the tunnelling current will have a harder time flowing. The cell value is read by measuring that current.

MRAM technology has evolved for denser embedding in SoCs. The magnetic layers, however, require CMOS-friendly materials that aren’t used for standard CMOS. Those extra steps can increase the cost of the finished wafer. But because of the small cell size, an MRAM-based SoC will be smaller than an equivalent SRAM-based SoC would be.

For dice with a substantial amount of embedded SRAM, the benefit of the smaller die can easily exceed the impact of the extra wafer cost, resulting in a net less-expensive chip. Future work on multi-level cells can reduce the die size even more. So for caching and local memory, MRAM competes well.

It will also beat embedded flash, since many of the tricks used to lower the cost of stand-alone flash chips can’t be used in embedded applications.

For stand-alone MRAM chips, the process can be further optimised, since no compromises are needed on behalf of processors or other logic blocks. Such MRAM chips will beat DRAM chips on cost in 3-4 years.

Beyond cost, there are several other key advantages of MRAM technology.

While all four memory technologies – SRAM, DRAM, flash, and MRAM – can provide benefits in some applications, MRAM can excel in many applications that today require combinations of SRAM with DRAM or flash. The result will be simpler, less-expensive, and lower-power systems.

In summary, then, we’ve long been able to leverage benefits from DRAM, SRAM, and flash memories, but those benefits have come with significant limitations. It’s been a challenge to find a new memory technology that could compete on the benefits while addressing the limitations. MRAM is now a leading contender for full commercialisation of such a memory.

You will soon see MRAM replacing SRAM and embedded flash in their many guises. Embedded DRAM is not so common – largely because it’s difficult, so any such applications are particularly likely to embrace MRAM technology. But a few years from now, you should expect to see dedicated MRAM chips that are cheaper than dedicated DRAMs. Existing technologies won’t disappear overnight – perhaps not ever. But much of what they do will be better served by MRAM in the future.