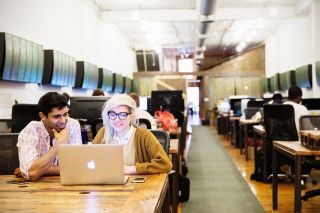 As internet connection speeds and access to cloud-based tools have increased, remote working has become an ever more viable business strategy. Still, despite these advances, remote working had remained the exception rather than the rule, with most organizations relegating it to business trips or the occasional stay at home to wait for the plumber. Indeed, the ONS found that just 5.2 percent of the UK workforce regularly worked from home in 2019.

As with almost every other aspect of our lives, this changed drastically in 2020 because of the Covid-19 pandemic. The government mandated lockdown meant that any business that could do so needed to carry on its operations remotely, which for many resulted in fielding a fully remote workforce – which would have been an unthinkable feat for many firms the year before. ONS figures show that around 49 percent of the UK workforce worked from home in in June 2020.

For those organizations that had done little more than dip a toe into remote working beforehand, this transition has been a massive undertaking. Without the right tools and processes in place, remote working can be fraught with challenges. Nevertheless, as remote working continues to be a priority for the foreseeable future, businesses will need to adapt their operations if they hope to keep their workforce safe, productive and secure.

The limitations of a short-term strategy

For those businesses that had only facilitated remote working as an option for the occasional offsite visit or home emergency, the most common approach was a traditional VPN solution. These tools create a secure connection to the corporate network by routing traffic through a VPN concentrator, generally via a data center. Without a pressing demand for the service, it’s common to find businesses retaining older legacy VPN tools. This approach will usually be sufficient for a small number of staff but starts running into problems when there is a sudden need to scale up.

Managing older VPNs can often be very resource heavy for the IT department and setting up just one VPN can take around 30-60 minutes. Factor in a large workforce of hundreds or thousands of employees across multiple locations, and this becomes a truly colossal task, likely with an extremely large bill for outsourced IT attached to it.

Even once employees are connected, legacy VPNS will often suffer from performance degradation because of the way all the traffic must be dragged back to the data center. As a result, workers must endure significant slowdown which can greatly hinder productivity, and more data-intensive tasks such as video calls can be all but impossible. The issue is exacerbated if the chosen VPN software was not designed to integrate well across multiple different devices and operating systems, particularly with the likelihood of homeworkers using their own devices.

Poor performance can also quickly lead to security problems. Workers desperate to regain their productivity will look for alternative approaches outside the secure connection of the VPN, inadvertently exposing themselves and the company to cyber threats.

In addition, while VPNs are designed to provide a secure connection, the fact that many firms have had to rush to provide remote capabilities will introduce more security risks. We have found many companies are reluctant to begin changing or updating the software of older solutions in case they accidently break something and disrupt their provision. This means that security patches are likely to be missed, leaving the VPN operating with known vulnerabilities that are low hanging fruit to cyber attackers.

IT and security teams also commonly work with a lack of network segmentation options or visibility into which applications are being run, making it more difficult to identify signs of malicious activity.

Preparing for the long haul

Back in March, many businesses sent their workers home expecting disruption of perhaps a few weeks while things calmed down. While not ideal, it is possible to make do with inadequate VPN provisions as a short-term fix. Nearly six months down the line however, normality is still far into the future. While workers have begun returning to their premises, most workforces need to remain at least partially remote to accommodate social distancing. Those firms that had to rush into a stopgap remote strategy must now take a step back and take the time to plan for the future.

One of the most important steps is biting the bullet to replace those old legacy VPN setups. While any IT overhaul is not to be taken lightly, this will be essential to keep the business running smoothly and keep the workforce safe – both physically and virtually. The best solution to these new demands is an entirely cloud-based SaaS (Software as a Service) approach such as SD-WAN (software-defined Wide Area Network).

Cloud-based infrastructure has a major advantage over on-prem setups as there is no need for firms to install new physical infrastructure on-site. It is also much easier to get workers up and running, drastically reducing implementation time and costs.

SaaS contracts also generally come with a flexible provision for scaling up or down. Businesses should seek out providers that will not only allow them to easily add more users, but also scale back  if circumstances change.

A high level of interoperability is another key feature that organizations should be on the lookout for. A successful solution will need to have virtual architecture that is compatible with all devices and operating systems used by the company, including the potential for authorized personal devices being used at home.

Businesses seeking a new remote provision will have two main priorities to accommodate – enabling their workforce to operate effectively and ensuring they can do so securely.

Overcoming the slowdown issues common in older VPN solutions requires virtual architecture that is hosted through cloud gateways located around the world, rather than relying on a single data center which may be far away from some workers. Performance can be improved further by prioritizing application traffic according to user need. For example, a remotely operating sales team that uses Zoom to host essential meetings with prospects will need a fast and reliable connection. These team members can be given higher priority for network traffic when using Zoom to ensure their calls are not derailed by lag.

The security issues inherent in a complex legacy VPN setup are also resolved thanks to SD-WAN providing a single point of control for the entire network. IT and security teams will be able to easily keep patches up to date, as well as gaining full visibility of all network activity.

By moving away from outdated legacy VPNs and taking the time to choose a solution that can be easily and securely scaled as the situation changes, organizations will be prepared to keep their staff productive and safe whatever the future holds.