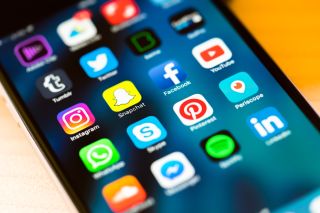 We’ve all been there: you’re messaging with multiple people on your smartphone and switching between the various communication apps that each segment of our lives is currently siloed off into. We’re all more or less required to sign up with a multitude of services, whether it’s WhatsApp to talk to friends, or Slack to speak with colleagues, or Skype, or Viber, or the big-next-thing platform. Of course, with each service we join we give out our personal information to yet another company, which in turn immediately turns over every scrap they can learn about us to advertisers.

And that’s not the worst of it. Competing services that represent locked off technical silos with no basis in common standards can be bad for users – and if you want to get big picture about it, is perhaps bad for humanity. They’re vulnerable to failure, hacking, exposing kids to bullying, etc. For a counterexample, think of the open protocols of the system we all use for email, where messages can traverse the entire Internet without barriers (other than spam filters if you’re selling Viagra, or if you’re a Nigerian prince who needs someone to hold onto a few million for you). The beauty of email is that any email account, be it Google, Yahoo, AOL, a corporate address or a personal domain, can send and receive email messages with any other. That’s a level of interoperability that has served billions of people across the world amazingly well for several decades now, and stands as an achievement well deserving of emulation.

Imagine messaging services working in the same way that email does, with no barriers standing in the way of transmitting information from one messaging platform to another. A few rising trends could lead to the breakdown of those technical silos that would be necessary to make this thought a reality:

The first promising development is the growing availability of affordable servers and the automatic infrastructure that comes with them. In other words: the cloud. The prevalence of automatic infrastructure is making it easier for developers to venture into the territory of system administration, because they can now treat server configurations as code. This means developers no longer need to fear learning how to run a web service; rather, they can operate in a familiar language that allows them to begin running their own services.

At the same time that the cloud is simplifying infrastructure, internet-connected user devices are becoming more powerful. Currently, whatever information is shared over messaging services – text, images, etc. – is being collected and transmitted to others, with little clarity into who is actually in control of that data. This, of course, invites risk even with data that is simply stored on a smart device but backed up in the cloud (see: iCloud scandal). Bugs in proprietary software and the hacking they make possible, such as Facebook Messenger’s recent Originull attack, further demonstrate the risk of personal messages, photos, and attachments being exposed.

The technology we all hold creates the need for the answer to the question “Who controls your data?” to ultimately be “You do.” The same technology also provides the groundwork for making that possible.

The trend that ties it all together. Research lead by the W3G Social Web Working Group is exploring and developing the concept of “online federation.” With this concept, protocols and tools the group is working on will allow data to flow across domains, in the same way an email message does. These efforts by the W3C focus on the creation of social web application interoperability standards, as well as the development of free and open source software capable of putting these standards into action. Open standards valuable to the implementation of federated control over networking resources include OAuth authorization, OpenID authentication, OStatus federation, the Portable Contacts protocol, and OpenSocial, among others.

Assembling these pieces, we can start to really envision a world where developers use cloud infrastructure to empower people with smart devices to send any data they like across the internet, with open and secure protocols utilizing domains as the pathway. Online civil liberties advocate groups like the Electronic Frontier Foundation (EFF) have championed this federated social messaging approach, citing its potential to ensure that individual internet users have options for direct control over their privacy and personal data.

To strike a more serious tone for a moment, there are real scenarios in our world today where internet users require privacy, data security, and anonymity in order to be safe. For this category of users, who may be using social messaging to communicate important thoughts or speech in the face of oppressive regimes or similar, control over transmitted data is much more critical than for those of us who simply want to keep their personal preferences out of the hands of advertisers.

If we accept, for better or worse, the online communication and the use of messaging platforms are requisite and unavoidable features of life as we know it today, it makes sense that this required technology exist beyond the purview of a handful of companies. Perhaps ironically, when control over messaging data is more public, less of that data will ultimately become public. Empowered by open protocols and technology, each person could have his or her own private and safe space on the cloud, running services of their choice, have messaging or even their own interface that looks like Facebook’s newsfeed or any other design, and control all their own information with a singular and elegant service.

Beyond the simple email-like convenience of messaging anyone from a single interface, users will gain the peace of mind from knowing that their data has traveled to the precise recipients they intended and no one else. No longer would users need to hand their pictures to Google or some other third party to relay them to family members, or sign up for another app to exchange messages and communicate in general.

Instead, we will have reclaimed the web for ourselves.