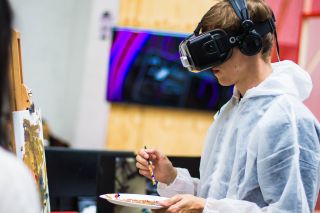 In recent years, virtual reality (VR) has fuelled imaginations of what is possible through simulated environments, offering experiences that people could only once dream about. The growth of new technologies and the pursuit from vendors to continually push the limitations of the hardware and software, has helped turn VR from virtual to reality. According to research from Zion Market Research, VR is expected to reach $26.89 billion by 2022, showing its rising popularity in the years ahead.

While gaming has been the initial beneficiary of VR, and has no doubt driven the market growth, the popularity and innovation of VR has helped drive this technology into new verticals such as healthcare and astronomy, and more recently within education.

While technology as a whole has grown, the education sector has been far slower in adopting new technologies within the classroom. The UK education sector has shown a willingness to put technology in the hands of students, such as smart panels and interactive displays, but still more must be done. Limited budgets and a lack of time are often cited as the main barriers in delivering the best possible experiences for students, but VR has helped reimagine possibilities not seen in the past 20 years, reinventing the experiences of students for the better and helping address many of these challenges.

Can virtual become a reality in education?

To better understand the opportunities of VR within education, Lenovo conducted a study asking 500 primary and secondary school teachers about their views on VR, producing a number of interesting findings.

Incorporating VR within the classroom is a widely supported view from teachers across the UK, with an almost unanimous 94 per cent believing that it would benefit the classroom. Nearly half (42 per cent) predict that it will become commonplace in the next five years, which supports the projected growth of the VR market industry in the coming years.

Currently, as VR is still a relatively new technology, adoption is still very much in its infancy. Only 23 per cent of teachers have used VR in the classroom thus far, but of those that have used it almost all (97 per cent) found that it made for more engaged students. This comes at little surprise as students are no longer limited by textbooks, and instead offered 360 degree visual and immersive experiences, helping bring ideas from paper to life.

Initial applications of the technology has seen a handful of educational VR headsets used within schools, especially as teachers familiarise themselves with the technology. As the technology evolves, VR headsets will become more popular across the education system, as both teachers and students alike begin tapping into the benefits of VR.

One of the largest challenges in education that VR technology is helping tackle is making things in the world real and relatable, helping them better visualise topics such as science and geography. With limited budgets (71 per cent) and time (42 per cent) being persistent obstacles in education in offering these experiences, two-thirds of teachers believe VR is helping visualise things faster than previously possible. This works hand-in-hand with the visually immersive experiences students are used to in their day-to-day lives, further enforcing the natural progression of the technology within education.

Teachers cited that taking students to explore new worlds through VR technology would be one of the biggest pulls of the tech. Some of the key areas to explore included climbing to the top of Everest (67 per cent), seeing moments in history like the D-Day Beaches in WW2 (66 per cent), or exploring wildlife and the natural world such watching a volcano erupt (65 per cent). This mirrors the subjects which teachers feel would most benefit from VR, with Sciences (27 per cent) and Geography (23 per cent) making up the top two.

But what VR is also helping overcome is the financial and physical barriers that some students face. For students unable to embark on field trips or trips abroad, VR can help ‘level the playing field’, enabling similar experiences for students from all backgrounds. There’s also the application for long-distance learning, where travelling for hours is eliminated as VR is easily able emulate the appropriate learning environments. In higher education for example, you can imagine the power of VR in helping recreate a lab environment for those studying sciences to get a visually immersive experience that closely mimics a real-life setting.

Inspiring the next generation

VR technology is enabling teachers to provide more immersive experiences for its students, but is also a real driving force in inspiring the next generation of technologists. Three in four teachers (74 per cent) stated that there will be a positive effect on the design and creativity skills of students, with over half (57 per cent) claiming that VR can actually help build aspirations for students regarding the types of jobs they want to do. 73 per cent of teachers agree that it is also the key facilitator to move classrooms forward into the future, and 55 per cent firmly believe that VR will see an up-turn in grades.

This blended environment means that students are no longer bound by classroom walls or traditional lesson plans, thus offering more varied experiences for both students and teachers alike. Yet, while the VR market continues to explode, there is a greater demand for specialist workers to enter the market and develop high-end VR applications. VR is still a relatively new industry and as a result, designers have had to develop a new set of skills in order to accommodate VR – a complete restructure of the traditional hardware that they have previously been accustomed to.

Yet VR technology itself is providing a gateway to more opportunities in this field. Students who are already engrossed with technology in their everyday lives are able to develop their own VR experiences through coding, helping create career opportunities for themselves in the future. Introducing VR in education and wider acknowledgement in the curriculum are the right steps forward to address this skills gap.

VR has the potential to create an endless stream of opportunities within education that will only drive more engaged students and learning experiences. These experiences provide a spark of curiosity that carries the student into their classroom studies, as well as introducing them to the larger communities around them and the possibilities ahead. The wider support of VR within education will help mirror student’s everyday usage of technology, providing a familiarity but also a blended learning experience that will not only better their understanding of the world, but also cultivate a new generation of technologists.