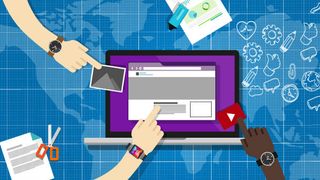 They say that goldfish only have a six second attention span, and research from Microsoft shows millennials only fare slightly better at eight seconds. With this in mind, Prezi worked with independent research agency Opinion Matters to create the ‘Science of Attention’ report. Working in conjunction with neuroscientist Dr Carmen Simon, the report compiled data from 2,000 people in the UK, revealing the shocking impact attention span and memory have on how well we engage with content.

In 2016, 88 per cent of companies used content in their marketing strategy, but only 30 per cent reported it was effective. As any content marketer will tell you, ensuring users engage with your work is only half the battle. As such, the research also looked into how much content is remembered, and which were the most memorable forms of content. Astonishingly, we found 80% of people can’t remember most of the information from branded content they’ve seen just three days prior.

However, the Microsoft research is misleading, the reality is that our brains can house vast amounts of information and we regularly maintain focused interest for long periods of time. Films typically last around two hours, and on public transport, many remain glued to their phones for the entire journey, browsing social media or online news. In fact, the latest figures show that, on average, we spend more than 4 hours a day looking at our phone screen. Unfortunately, the workplace is typically less engaging than your Instagram feed and I regularly hear from presenters that their audience is daydreaming or doodling while they speak. And it’s not just employees, increasingly brands are struggling to engage with their customers – particularly when it comes to content where the marketplace is growing ever more crowded.

Standing out from the crowd

In a world where we see 3,000 online ads per day, it is not surprising that more than half of people (51 per cent) usually only read the headlines of articles, or just read the headline and quickly skim the rest.   On average, only seven per cent of people will read more than five full articles in a day. It’s likely that most of your readers are just glancing at the title, without taking the time to click through and see the full company messaging. As such, think about what you can do to encourage readers to read until the end.

Sometimes it can be as simple as leaving the best until last. When you watch an award ceremony, they will leave Best Company, or Best Picture, until the very end, as they know many are waiting just to hear this announcement. Think about your content in the same way – consider leaving a teaser, or asking a question in the headline, that is only fully answered if they read through to the conclusion.

If you run a company blog, consider varying both the topics and style of content you post. According to Dr. Carmen Simon, scientifically speaking, the unfamiliar is more memorable. If you run similar stories every week then readers will go in expecting to know how it ends and quickly lose interest. Likewise, if you’re always post articles, consider a video or infographic to present the information in a different way. You can reach new audiences and encourage those who may not enjoy reading.

Engaging with your audience

In order to determine which types of content are the most memorable, we asked those surveyed to rank their preferred type of media. As you may expect, video tops the list, and is considered memorable to 37 per cent of people. Written articles are the second most memorable form of content, remembered by 28 per cent. While most businesses are already putting out written content, consider adding another element, such as video, to your articles. By employing multiple devices within your work, you ensure the greatest chance that it will be

Alongside this, breaking up your content with pictures, video and graphics will help keep the reader’s attention. Think about sites such as Buzzfeed that saw meteoric success with articles that contained very few words. While your brand may not wish to go that far, breaking up large bodies of text is proven to improve attention spans.

We also asked consumers what helps them remember content and the top answer, from 27 per cent of people asked, was being told something new. Sometimes the constant array of information, pictures and videos can be overwhelming in this fast-moving society. Try to look outside the box, something we have never seen before will not only stand out, but be the most memorable. Think back to school, everyone’s favourite lessons were those that shook up the usual format – whether that was adding a videotape or going outside. Those are lessons you remember.

49 per cent of respondents said that content containing mentions of something good that’s happened helps them to remember in the long term. They say good news doesn’t sell but currently almost half of people are wanting more. This is no coincidence, emotional stimuli lead to neurochemical activity in parts of the brain that evoke storing and recalling memories, or in this instance storing and recalling content.

So what can you do to make your content memorable? Here are the three most common reasons that people typically forget content they’ve seen:

Irrelevancy (55 per cent) - It’s important to take into account what your readers want to see. Wherever possible try to implement surveys asking specifically what this is – adding a personal touch will keep readers engaged make them feel involved.

A lack of motivation to remember it (36 per cent) – Time is a commodity so ensure you give a call to action that gives readers a reason to remember your content. For example, instead of writing about why your product is the best – consider a more general piece offering relevant tips and tricks that will improve their business. If these are implemented it will be a permanent reminder of your brand.

Too much content to retain (30 per cent) - Nearly a third of the 2,000 respondents stated that they forget content because they see or read too much of it. As such, keep your articles concise and to the point. Ensure you headline explains what the reader will gain from reading the piece and give them a takeaway learning that makes it worth them remembering your article over all the others they have seen.

Overall, when you’re looking to grab the reader’s attention: make sure your title is to the point, create content that reads fluidly and looks good, but most of all, tell your audience something new, and where possible make it positive.