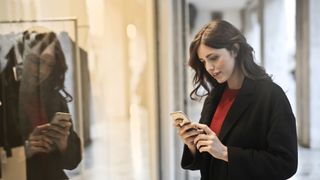 Another day, another high street stalwart announces store closure. Coming hard on the heels of M&S cutting 27 stores, now House of Fraser is set to close 31 of its 59 stores and Poundworld is calling in the administrators. Added to the list of recent failures, including Maplin and Toys ‘R’ Us, plus the sale of Homebase for £1, claims that 2018 will be the worst year for retail news since the recession in 2007, do not look in any sense far-fetched.

But retailing as a concept is far from broken; people still love to shop. They love Amazon, and the online upstarts such as Asos, BooHoo and Zalando. They just don’t love to shop with out-dated brand. Brands apparently unable – or unwilling - to match the quality of experience delivered by the pure-play online retailers.

The increasing failure of traditional retail businesses as they struggle to keep up with the online competition is not just due to the margin-sapping costs of bricks and mortar store estate. It is the fundamental constraint imposed by a turgid, slow-moving business model that is failing to keep pace with a phenomenal rate of change. Just consider, traditional retailers are still working on consolidated distribution models, investing in not only five or ten year leases on expensive warehouse space but also budget breaking bespoke warehouse operations that can take years to develop and implement. In contrast, newcomers are adopting widely dispersed distribution models that leverage the growing on-demand, pay as you warehouse model.

The result? Traditional retailers have massive investment tied up in underused warehouse space with no option to quit and no chance to innovate; while newcomers can experiment with agile distribution models, switching on and off new locations on demand, without penalty or constraint, to continuously improve the customer experience. The gulf in business outcomes is immense.

And this is just one example. Every aspect of the traditional retail mindset is flawed. Even when companies talk innovation and change, when they admit the need to improve the customer experience to embrace next or same day delivery, the results are failing to match up. The reasons are clear: a painful combination of tortuous decision making and unattainable short-term goals.

Retailers may pay lip service to the need to respond to the extraordinary pace of change and the impact of technology innovation on customer expectation, but the reality is still painful. Long, drawn out decision making processes, insistence on old-school sign off on incredibly detailed briefs and an adversity to risk that demands any change be tested to the extreme before it is released. A new website, for example, will take months and months to brief, spec, build and test; by the time it is ready, it will be out of date and aeons behind the competition.

At the same time, the financial goals are far too short term. Whether it is the shackles of shareholders or private equity investors looking for fast returns, traditional retail models are still dominated by short-term goals and lack of appetite for taking risks, meaning there is neither chance nor inclination to innovate. This is at complete odds with the culture of continuous improvement and iteration embraced by start-up companies, many of which are also supported by Venture Capitalists (VC) with the nous to recognise that longer term thinking is essential. Amazon took years to turn a profit simply because founder Jeff Bezos recognised the need to continually reinvest revenue to drive innovation and beat the competition. What is now one of the biggest companies in the world would never have survived the short-term financial goals now imposed on most traditional retail businesses.

It is somewhat ironic that failing retailers are being charged with stretching the boundaries of financial practice by exploiting the Company Voluntary Arrangement loophole to close stores, given that it is the embedded lack of innovative thinking that has created these financial problems. It is the mergers and acquisitions that have virtually eradicated differentiation and created a race to the bottom that has created the high street ubiquity increasingly rejected by a sophisticated consumer base. Yet such financial wriggling appears to be the priority right now – rather than innovation required to provide any chance of avoiding what appears almost inevitable failure.

Are traditional retailers aware of the trend towards distributed, on-demand logistics models that are key to cost-effectively meeting customers’ same day demands? Yes, but only as a chance to offload expensive and underused warehouse space; few are even considering how such a flexible model could support a better customer experience – as evidenced by the fact that 75% of retailers using on-demand warehousing have been in business for less than five years.

Traditional retailers are selling, not buying into warehouse innovation but that does, at least, demonstrate a recognition of the changing model. And perhaps, just perhaps, this awareness might begin to inspire some new thinking. While traditional retailers are undoubtedly constrained by the huge investment in existing bricks and mortar infrastructure, could some of this real estate be turned to advantage? Just as retailers are looking to repurpose existing distribution locations, what about repurposing some of the existing retail space in prime high street locations into fulfilment spaces?

While the cost of retail space is massively high compared to warehouse, the fact is that warehousing is just not available in city centre locations; a retailer looking to provide the next step in customer experience could retain the existing frontage as product showroom, parcel off the back room for fulfilment and leverage a fleet of Uber-style drivers and couriers to provide sub one-hour customer delivery.

Of course, there are barriers to such change – from landlords questioning agreed usage to planners concerned about the loss of shopping square footage. But again, just as the financial markets and business backers need to move beyond short-term objectives and adopt the long-term thinking that dominates VC led start-up businesses, there is an onus on local authorities to reconsider planning decisions in a bid to retain or even recreate high street identity.

Clearly, incumbent retailers have been hamstrung in their attempts to come anywhere near the quality of experience offered by the pure-play online retailers or direct to consumer players. From capital tied up in real estate to paralysis created by short-term financial measures, innovation has been stifled. But right now, it is do or die. Retailers have to make a change – and if that means lobbying the financial analysts to gain support for innovation or approaching planners and landlords for viable alternatives to the what is fast becoming an unsupportable high street model, then so be it.

But underpinning any strategic change has to be a fundamental shift in retail mindset. An innovative business culture predicated on continuous innovation embraces flexible business models, such as pay as you go warehousing. But a flexible business model also overturns constraints and unleashes an innovative business culture. Retailers – and retail employees – need not only a willingness to make a change but also permission to take risks. Without that essential shift in mind-set and financial expectation, the prospects for the long-term landmarks on the British high street will remain dire.