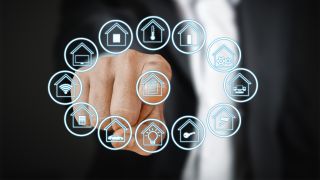 The news that Samsung has been granted its patent for Augmented Reality (AR) contact lenses by the US Patent and Trademark Office signifies an exciting future for the industry. Has the countdown to the end of the smartphone - as we know it - begun?

We’re at a point where we have cutting-edge AR software which could transform people's lives, but we’re waiting for the hardware to catch up before this exciting vision is fully realised. For some time, AR experts have heralded wearables as the technological development that will enable mass adoption of the technology, replacing the handheld devices we currently use. But we’re yet to see a viable version of these wearables come to market. That now looks set to change.

Samsung’s patent for AR contact lenses is a significant milestone in bringing to life the idea of AR vision that helps people to work, navigate, shop, communicate and experience the world in a more fun and effective way.

It would be optimistic to suggest the technology is just around the corner and we’ll all be sporting AR contact lenses within the next five years, but the patent being approved is the first step on a path that will lead to the technology being properly explored, funded and developed. We’ve already seen Apple move one of its high-profile software executives into a specialist ‘wearable AR’ division so, having a behemoth like Samsung also enter the space, is a fantastic demonstration of the bright future and mass adaptability of this technology.

Samsung's smart contact lenses are likely to provide a similar offering to AR glasses, but what sets them apart is the unprecedented field of view. This is really exciting as, unlike AR Glasses, the contact lens is able to move with the eye and ensure the user is constantly and seamlessly immersed in the AR experience, without the distraction of traditional frames.

What’s also encouraging is Samsung’s contact lenses promise to avoid the classic pitfalls of unsuccessful smart wearable devices like Google Glass. The biggest criticism of AR glasses focused on their failure to look aesthetically appealing, combine functionality with comfort or offer seamless controls. Simply being in the form of a contact lens ensures the most minimalist of looks and comfort, but Samsung’s patent also mentions a dashboard that is accessed via an external device, for example a smart wearable, something likely to be replaced later on by AR controls which render in front of the user.

We’re some way off being able to fit truly transformative features into a contact lens but, with IDC expecting the AR / VR market to grow at a rate of more than 75 per cent in the next five years, growing to over $120 billion by 2022, we will undoubtedly see an influx of investment in AR wearables. As such, the technological advancements required to make Samsung’s contact lenses a reality may come along sooner than we think. What’s interesting for now is we’re starting to see how Samsung’s engineers see the device taking shape.

What does it mean for us?

AR has already made waves across industries such as gaming, manufacturing, e-commerce and education, and is making an increasing impact in a plethora of others including fashion and art. Apple recently collaborated with New York's New Museum to launch a series of AR art experiences that sees six large-scale virtual artworks take over London, San Francisco, New York, Paris, Hong Kong and Tokyo. Although the art is brought to life via a smartphone, the AR experience is impacted negatively by being perceived through a screen. Imagine the future with AR lenses where you will have your own magic vision, naturally displaying live paintings and enabling you to interact with your world in a way you have never done before.

AR is already part of our everyday lives and developers are already hard at work constructing an ecosystem of apps that lay the groundwork ahead of a mass-launch of AR-enabled devices. Many AR apps of the future are already popular on smartphones today - with FaceAR apps like FaceApp or Alportraits receiving viral attention - and, as devices become more capable, we will see an explosion in the practical and fun ways in which AR can be implemented. AR eyewear has many benefits which we will begin to see affecting our everyday habits. For example, rather than navigating the streets using Google Maps, apps equipped with computer vision will display directions right before our eyes, as if laid out on the street in front of us. This will remove the need for screens, consuming images and video directly via our AR-enabled devices.

In short, lenses and glasses are clearly the future of AR, of which we will likely see the latter become a reality first before being replaced by the former. But whilst we’re waiting for the hardware to catch up, news like Samsung’s patent being granted offers great promise for the nascent technology.