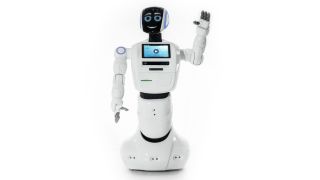 Robots are one of the main world trends in the world of technology. Automation and AI are increasingly entering our lives, and robotics is the most dynamically developing industry.

Russian company Promobot is the largest manufacturer of autonomous service robots in Russia, Northern and Eastern Europe. Several hundred Promobot robots already work in the US, China, Kazakhstan, Ireland, the UK, Spain, Chile and other countries around the world. They work as administrators, promoters, hostesses, are able to increase the financial performance of companies, the quality of service and customer loyalty.

Oleg Kivokurtsev, development director at Promobot, spoke to ITProPortal about the service robotics and the robots produced by his company.

What are the key areas in robotics that the Promobot is being used for at the moment?

To date, several hundred Promobot robots are operating in 13 countries around the world. They can communicate on any topic, advise, show various materials on the built-in display. To perform the functions of administrator, promoter, hostess, museum guide, consultant in cinemas, shopping centers and business centers, as well as in crowded places where assistance is needed

How developed is the field of AI robotics in Russia at the moment?

AI is also developed by our company and is used in our robots: in the direction of speech recognition, face recognition, autonomous route construction and linguistic base.

Our most important result in the direction of artificial intelligence is the neurolinguistic base, which allows the robot to answer questions as consciously as possible. It is enough just to load a certain amount of data, for example 200 pages of text, and the robot, after analyzing this text, will be able to make the most accurate answers, which, in turn, greatly simplifies the work with the robot and its customization.

AI is actively developing in the military industry. There is a whole line of robotic devices used in the direction of defense.

How do you plan to overcome the public's aversion to robots in their everyday life?

First, if the appearance of the robot causes it to be in an "uncanny valley". Namely, scientists and researchers carried out an experiment called "Phenomenon of the uncanny valley" - it means that if a robot visually resembles a person, but there are certain inconsistencies, then a person has unpleasant feelings about it. The robot begins to be perceived as a zombie or a sick person, so the robot in an uncanny valley.

Our robots were designed taking it into account, they are not anthropomorphic and do not fall into an uncanny valley. They are more abstract models and associated with technology.

Secondly, people are afraid of robots because of the risks inherent in artificial intelligence. Mankind is afraid that AI, sooner or later, will be capable of harming and destroying humanity.

We, for our part, are participants of the list of the world community of robotics, which stands for regulating the use of AI in the military industry.

Namely, we propose to limit the use of AI in the direction of the nuclear industry. If one uses AI in the field of object recognition, then one should apply it in a special way. It is necessary that the final order is given by a person, not by a machine.

In general, people are already ready for the presence of robots in our lives. In most cases, robots are perceived positively. Promobot is popular among people - unlike a living consultant, the robot does not get tired, always in a good mood and knows everything, he does not need breaks for lunch and holidays. He will never offend, unlike a regular employee.

What is your main R&D focus going forward?

So, now we have two flagship products –they are Promobotv.2 andPromobot v.3. They are designed for different purposes: Promobot v.2 is designed to advise, speak about products, perform the functions of an assistant, consultant to improve the quality of service and financial performance of the company, while Promobot v.3 is created to perform narrow business tasks . It is an open robotic platform, it has open APIs and SDK with which it can be built in the business processes of the company in which it operates. For example, if it works in the retail industry, it can integrate with the internal accounting system of goods, and there are a lot of such options. Also, the developer can create his own applications, and, in the future, to make money on it.

This all is impossible without the basic functions of the robot -  and we daily develop and refine them.

We regularly improve speech recognition: our robot can hear a person, understand its question and consciously respond, regardless of the noise in the room.

We are focused on developing and optimising the face recognition system, which allows our robots, to understand with whom they communicate, accordingly, and have a dialogue and it can understand who is in front of it in a dimly lit room and even without lighting.

Now we use the technology of neural networks, which allows us to load an array of plain text into the robot, and the robot, without any human help, can navigate in this text, and, accordingly, give the right advice, as a consequence, to be useful and effective in business in which it is applied.

We carry out developments in the field of navigation, mechatronics, we add gestures, the ability to adjust to the growth of the interlocutor and so on. In addition, we are developing in the field of artificial intelligence, which is used in some of our modules. We focus on this direction, and our main task is the distribution of our robots around the world.

What do you think will be some of the best use cases for the Promobot?

Several hundred of our robots work in 13 countries around the world, as administrators, promoters, consultants, hostesses, museum guides and even concierges.

We have a lot of successful cases. For example, a robot guide in the Museum of Modern History of Russia in Moscow. In this museum you can ask a robot for a tour. When it gathers a group, the robot starts to conduct am excursion: it rides from the exhibit to the exhibit, stops at each, tells about it and answers the visitors' questions. Thus, the process of conducting excursions is automated. The robot knows the answers to all questions, is able to conduct quality excursions and does not need rest or holiday.

The second interesting case of application is the retail industry. In this sphere the robot is able to consult shop visitors about the products. For example, a buyer needs milk and he cannot find it. It is enough for him to approach the robot and ask him where the milk is - the robot leads him to the milk counter, and also tells about the current  discounts and promotions of the store. This increases the sales of the store and allows one to save on sales consultants.

Promobot is used in the banking industry. Our robot is able to help to make a contract, to consult on all banking products, on accounts, on deposits. It is able to send a contract for printing, and the client will only have to sign the contract. The robot automates the work with visitors, improves the quality of services and financial indicators of the bank.

How developed do you think the robotics market can become in the future?

The robotics market is growing very actively. According to the International Federation of the Robotics Market, annual growth is 500%.

The main industries where robots will come to are:

First, where it's dangerous to work. Elimination of emergency situations, oil, coal and gas production, construction.

Secondly, these are harmful industries, the work in which is harmful to human health. For example, metallurgy.

And, thirdly, robots will come to where it is boring to work. They will replace sales consultants, promoters, security guards. For this purpose, there is a special branch of service robotics. It is also developing rapidly - the characteristics are improving, the components are getting cheaper.

We are waiting for total robotization, a robot will be introduced in each process, and a person will have great prospects for creativity, science, self-development, sports, and, most importantly, the discovery of new horizons such as space.