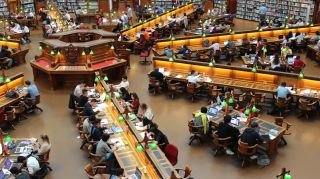 There are a lot of transferrable skills in the arts—in fact, a lot more than you may think. Personally, I’ve been involved with the arts since the age of ten and had no intention of going into technology until after I left university. The greatest programmer I ever worked with had a philosophy degree and throughout my career, the majority of my colleagues didn't have computer science degrees.

While many IT pros may have come from an academic IT background, it’s no longer the only way into the field. The STEM-only mindset is all wrong. In today’s digital economy, you have to be able to look at the context in which technology is used and understand the human behaviour driving it. So, what is it about studying for a liberal arts degree that makes it the perfect ground for sourcing the IT pros of tomorrow?

While a computer science degree may give you a number of hard skills that remain relevant throughout your career, technology will change quicker than you can graduate. Jumping into IT with a fresh perspective could actually be a benefit. Soft skills are often regarded as the most transferable skills when in the market for a new job and nowhere are they more cultivated than an arts degree. Some of these skills include:

Writing – Often seen as the bane of the developer (or even the SysAdmin), the ability to write clearly and with the proper level of detail is a skill that can help IT pros thrive. Having the aptitude to gauge an audience and write for them—not so simple as to seem patronising and not so technical as to lose the comprehension of the audience—can be a huge asset.

Speaking – The stereotype of the IT geek is that of an “introverted loner,” or the person who is most comfortable in a department of one. The reality is that tech is enormously collaborative. Not just with peers within the team, but with peer groups within IT, the management who serve as sponsors of various initiatives, and the user community who often are the beneficiaries (or at least recipients, hopefully not victims) of the technology we create, deploy, and support.

The ability to stand up in front of a crowd and speak confidently and clearly, in a way that puts them at ease, is more often cultivated in a politics seminar or sociology classroom than a computer department.

Lifelong learning – To pursue a career in the arts is to commit yourself to a constant state of “I don’t know, but I want to find out.” Nobody takes on the role of Einstein already knowing everything about Einstein. Nobody decides to paint a classic building already knowing everything about its architecture, history, etc. Artists take on new projects precisely because it puts them (and their audience) in contact with the unknown, since it’s the artist’s goal to bring the subject and audience closer as a result.

IT professionals often know a great deal about their craft—they know how to program, they are familiar with the intricacies of the operating system, and they have experience and expertise with failure modes. A willingness to learn new technology, delve into a new framework, and pivot their career into new areas is what separates leaders from followers.

Project management – Putting together a production, filming a movie, preparing for an art show, rehearsing for a concert—these are all things which have a huge number of moving parts and require a significant amount of planning, tracking, and management. The ability to juggle these elements would be an asset to many fields, particularly the IT department.

Personal and technical empathy – At a personal level, empathy is about the ability to assess an individual or group’s current emotional “place” and speak within that context. For IT careers, it’s also important to have technical empathy. That is, to be able to put yourself in the shoes of the “other”—the user, the developer, the approver—and crafting your responses, questions, and comments to address that person’s mental frame of reference.

Simplifying technology and making it easy for executives to understand is an important skill that may come more easily to those with an arts background. If IT pros can cut through the jargon and overwhelming complexity, they can be seen as masters of identifying a solution’s strengths, and executives may fully appreciate their advice when it comes to saying whether a new technology is, or is not, perfect for an organisation.

Shifting the focus away from product features, and onto IT issues is important for ensuring that executives can understand how technology investments will meet business needs.

Aesthetic – Being able to see the beauty in technology is often overlooked. Take Apple® and its aesthetic, which is one of its most defining characteristics. Today, Steve Jobs is hailed as having had “an unprecedented impact on the world's consumer electronics markets,” reshaping big chunks of three entire industries: music with the iPod®, mobile telephony with the iPhone®, and personal computing with the iPad®. He recognized a previously untapped consumer appreciation for technology that looked and felt good. While many recognize Steve Job’s impact at Apple, few acknowledge that sensibility in their tech hires.

While the similarities or transferable skills from an arts degree to the IT department might not spring straight to mind, the skills outlined here (as well as many others) can have a measurable impact on IT deliverables, on IT teams, and on the business overall. If IT departments want to cultivate the well-rounded, all-encompassing skillset that today’s digital economy demands, we need to think outside the STEM-only mindset.