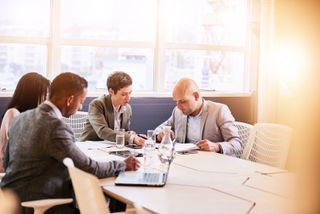 We all know that making a quarterly sales number in the software market is part of any sales leader’s DNA. But it can prove even more challenging to meet those targets if you have what we call a virtual vacant territory. So picture the scene – you have a great sales rep covering a major territory. What you don’t know is that they have decided to leave and that will have a massive negative effect on the future productivity of that territory. Why? Because in their head they have already mentally checked out – in fact it’s what Facebook COO Sheryl Sandberg calls ‘leaving before you have left’.

It’s bad enough dealing with actual vacant territories – we’ve all had the scenario where we are given the sales quota for new hires at the same time as we are given the permission to hire a new rep which means there is always a lag of several weeks before the new person actually starts and then even more time before they start becoming productive.  But a virtual vacant territory will be even worse because it’s a hidden risk. There’s going to be several weeks – maybe even a whole quarter in advance of being given that formal resignation – and it becomes an actual vacant territory. You have to add in the time and cost of finding and hiring a replacement in a busy market.  Then they are likely to have a notice period, join the team, be trained and become productive – that’s probably a delay of around 90 days.   The impact of this is huge and can affect a leader’s results of up to three full quarters of a year.  Put another way that’s 75% of annual revenue – a massive deadweight.  Here’s what the outcome of that risk looks like:

So, against a backdrop of losing nine months of your sales quota from that territory what can you do to ascertain whether your rep is actually looking to move and so has already mentally ‘checked out’ – or simply suffering from a temporary performance blip?

Firstly, you need to be constantly looking for the early warning signs – the clusters of indicators that a rep may be looking to resign in the not too distant future. Here’s what I call my ‘dirty dozen’

The difficulty with all this of course is that often you will be managing remotely. It’s challenging enough to build relationships between managers and teams at the best of times – let alone when you are not based in the same office. It’s a good idea therefore to have regular face to face meetings backed up by conference calls so that you are in the best position to spot those early warning signs. It’s also a good idea to check in regularly to see if there is anything causing them undue stress – remote workers can get anxious and frustrated if queries aren’t dealt with quickly and this can all add to reasons why they may think of leaving. Remote workers can also sometimes feel isolated so think about encouraging teams to build closer relationships by creating smaller working groups of 2 or 3 team members to work together on a particular task. Often people leave because they feel disengaged or undervalued so ensure that you praise team members for achievements and successes. But make it specific so that they fully understand the reason for the praise – and know that it is sincere rather than just ticking a box. This not only generates good feeling but also encourages a team oriented culture.  Internal communication is also vitally important so publish regular news of the team’s progress against the sales objectives and aim to keep all staff up to date so that remote workers do not feel isolated or excluded.

While you can’t stop someone from wanting to leave – you can try and spot the early warning signs and try and address the issues if you think the person is someone who you want to keep.  But the other crucial part of the equation is to ensure that you build your ‘talent bench’ – a pipeline of candidates that you keep engaged with your brand. You may also look to build a close relationship with a quality niche search firm which can be constantly scouting for top sales talent on your behalf  so that when the time comes, the transition is as painless as possible.