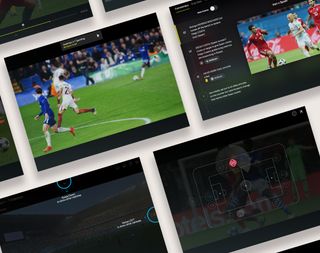 At a time when broadcaster revenues continue to be hit from all sides by OTT players, live sports content has often been seen as the last bastion of defence. Now, though, things have changed there too. It’s not game, set, and match just yet for traditional broadcasters when it comes to sport. But in recent years this segment has certainly become a huge opportunity for OTT streaming providers, and with good reason.

More people are willing to pay for an all-sports over-the-top channel than ever before. Just look at the success of platforms like DAZN, reaching tens of millions of viewers around the world by offering a targeted and well-presented sports only platform that can undercut pay TV models. OTT sport services typically have the potential to offer consumers better levels of interactivity and inclusion, too, which can be hard to match with linear TV.

Even high-profile mainstream sport is being impacted. Take our beloved football, for example, where BT and Sky have dominated the playing field for years with Premier League rights. Amazon’s deep pockets have now begun to disrupt the status quo, securing the chance to stream 20 Premier League matches a season from 2019 to 2022. Widespread change, in this particular instance, is some way off, but Amazon’s latest move has certainly sparked a shift for the future. And with such high potential revenues at stake when it comes to sport content, we’ll likely see many other non-traditional broadcast players placing bets like this before long.

The opportunity that’s in play

The attraction of being able to offer access to live sports is obvious. Whether it’s on a global scale such as the World Cup, or more targeted like college football in the US, those that control the rights typically get immediate access to the most loyal and content-hungry fans in the world. It’s a huge opportunity to drive subscription revenues and additional bottom-line growth through advertising.

However, if the recent World Cup streaming debacle has taught us anything, it’s that merely holding the rights isn’t enough. The user experience offered to the consumer is as important, not only for keeping viewers engaged in the first place but also encouraging them to part with their hard-earned cash in the long-term. And, of course, as not all fans are created equal, finding success with sports streaming depends on having a much deeper understanding of the audience than with linear TV or regular OTT content distribution.

From the casual committed fan to the die-hard fanatic, each type of viewer has their own set of drivers and motivations for what they want to get out of a sporting event. It's equally important to consider how die-hard fans are likely a guaranteed audience, but less dedicated viewers can be fickle. So, for those providing sports content, keeping different types of viewer engaged depends on being able to offer the right user experience, to the right consumer, on the right device, and at the right time.

Take, for example, the casual committed fan. What they’ll want to see during the game is very different to a die-hard sports fanatic. While the casual viewer may engage more with live tweets and commentary on their smartphone in the breaks and want a regular view of the match on their smart TV the rest of the time, a die-hard fan will expect access to instant replays during periods of non-play and the ability to swap between more than one camera angle while the game is taking place out on the field – and probably across more than one device.

Let’s not forget the role of social media in the sports equation either. Fans now have access to a plethora of content to indulge in beyond the game itself. YouTube, in particular, has become a prime platform for value-added content that fans can’t get elsewhere, helping to build excitement ahead of major sporting events. OTT players striving for future success would be wise to tap into the other avenues of content that are available and bring them into their world through the UI.

Putting the technology in place

It’s clear that the future of OTT sports is in making it easier for fans to follow their favourite teams in the way they want to. Making this happen on the fly, however, is difficult. It depends on having full control over the platform UI and using that to inform and control the overall user experience. Yet, with OTT sport being such an incredibly competitive landscape, this is where many service providers come unstuck by not being able to cater for different types of fans.

Traditionally, it’s been both time consuming and expensive to adjust the UI on the fly because it depends on engineering teams to make those alterations. So, what’s the answer? Getting around this problem depends on putting a new, device agnostic user experience platform at the heart of any streaming service, removing the engineering cost and introducing the flexibility required to meet the demands of different types of sports fan.

It’s a case of putting the power back in the hands of those on the front line, such as content schedulers and marketers, to manage what the user sees – thereby making it possible to personalise the experience in real-time using individual preferences and other data points. Through adjusting content feeds based on user habits and behaviours, and by altering the UX pre-game, in-game, and post-game to enhance the emotional journey at the heart of live sport, OTT players stand to attract and retain the most loyal followings.

Driving additional revenues with the UI

However, the benefits of a more flexible user experience platform don’t stop there. The next phase in the evolution of OTT sports is how the UI can be brought into the fold for driving additional revenues, particularly as being able to alter the UI in real-time opens up new opportunities when it comes to enhancing the bottom line through relevant advertising.

The most notable example of this in practice is what’s referred to as a sponsored UI. Here, more advanced UX platforms can make it possible for content owners to sell the premium real estate that is their UI to brands. Sponsored rows, backgrounds, categories, and landing pages can be injected into the user interface as appropriate. It’s not a new concept in the grand scheme of things. After all, this has been the staple of advertising on the web for years. But it’s different to how advertising usually plays out with video streaming.

It’s an important shift too. The rise of OTT subscription services like Netflix have almost entirely eroded consumer willingness to sit through pre-and mid-roll ads. This has made the sponsored UI concept rise up as a new, valuable avenue for driving revenue and getting a return on expensive content acquisition rights in a way that doesn’t interrupt the viewing experience.

The potential for OTT sports growth

We’ve entered the age where content has likely been dethroned. Or, if it is still the king, then the consumer experience is certainly it’s queen. To compete effectively in such a crowded marketspace as OTT sports, offering an engaging user experience has become a necessity. Taking this a step further, OTT players would be wise to consider how they can segment their userbase using the data insights uncovered through an advanced user experience platform, that will also allow them to tap into new methods for generating additional advertising revenues.

Ultimately, the potential for substantial growth with OTT sports is there, but only for those that’ll capitalise on the tools available in helping to make that a reality.