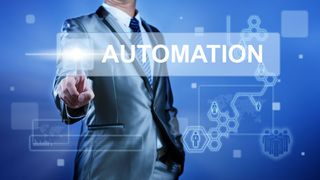 Automation is in the news everywhere and most organisations are looking to deploy the fabled technology in a bid to improve efficiencies and reduce costs. However, it can be difficult for business leaders to get the results or know where to start, especially when leading consultancies push for aspirational approaches that propose to leave every inch of the office automated. In fact, “the technology” does not exist; Automation is not a technology, it’s a shift in operating mode. Implementing automation technology simply shifts work from people to machines either gradually or in a step change. Harnessing automation is about business transformation; a journey which is enabled not by one fabled non-existent technology but by many real technologies which actually very work well. In fact, Gartner suggests that as many as 72 per cent of automation projects fail, despite >86 per cent of the projects being a technological success.

This really highlights the importance of planning for transformation before selecting the technology – which is often the opposite of the guidance given by many project leaders today. Rather than being guided from a people centric approach, it’s best to start thinking from a machine centric perspective and, although this can be easy, it is a step change in thinking.

By analysing the organisations operations from a machine centric perspective, it’s easier to set out appropriate goals from the outset. Beyond the cry of “we must have bots!”, it’s far too easy to steam ahead and commit random acts of automation – which serve limited benefit to the business or its employees. The reality is that this is likely to alienate the workforce, encourage cultural dissent, and break working operations… at machine speed. Accepting that it’s not possible or necessary for current technology to automate everything is often perceived as going against the current popular belief, but this is still very much a reality. To be successful in deploying the “robot” workforce, the goal must be to create a hybrid; man:machine environment, where employees and machines work together for the greater good.

Adopting a mindset for automation

Once business leaders have decided to go ahead with a workforce transformation project, it’s important that the concept is introduced and maintained with staff in the right way. Allowing increased fear around how automation will replace certain jobs will have detrimental effects at every stage. Cultural resistance in the initial design relies on full participation of subject matter experts these are best selected from current operations.

It’s important to keep in mind that people always tend to revert back to “manual workarounds” which ultimately undermine automation. It’s best to focus attention on how automation can be used to help employees carry out the parts of their jobs they dislike. Whether it be preventing weekend working, late nights, poor quality or improving productivity – spelling out the individual benefits will drive better participation and improve employee satisfaction. Embracing the fact that the definition of everyone’s role will be changed and focusing on the parts of individuals roles that will remain, or be enhanced, will ensure full participation. Fundamentally, embedding the message that work will be better, more productive and enjoyable will directly deliver operational benefits to the organisation, customers and the overall economy.

A good example of successful implementation comes from the telecoms industry; traditionally teams in the network operation centres would be monitoring screens and managing alarms, rather than managing faults and monitoring networks. For one tier-1 network operator we work with, intelligently automating this area of the business freed network operations teams from the mundane tasks of fault management and housekeeping. Instead allowing them to be deployed to other more valuable areas of the business such as Customer Solution Design, and New Product Development. In fact, it’s also given those employees the opportunity to reclaim a regular working pattern and focus on aspects of the role which they were time squeezed on; producing significantly higher quality services to customers. In this case automation has helped employees to focus on the aspects of the job they enjoy, rise to higher paid employment and helped the business to triple the divisional revenue. It turned a poorly performing service into an industry leader for whom the employees are proud to work, in turn, reducing staff churn from 21 months to 5 years.

Many businesses talk about reducing costs as the number one outcome for an automation project – however this is really a secondary outcome which can only be achieved once the initial objectives are set. If the goal was truly just to simply reduce costs it doesn’t require automation; you could shut down offices or just fire some people to achieve this. So, there must be more to what you want to achieve as a business for automation to succeed.

Defining objectives is an essential part of the planning process. The objectives must be defined as a subset of the primary measurable outcomes of automation. The business case should be used to translate these to the expected business outcomes. Insight and analytics are intrinsic and help the organisation to determine how it’s progressing against these objectives and thereby the outcomes.

Once the objectives have been set it’s important to start selecting initial targets for the technology. It’s critical that organisations work with a provider who has a proven and structured approach with a clear methodology. The initial steps to take when embarking on an automation journey are important and the key actions are outlined below.

However, it’s also important that organisations don’t fall into the trap of optimising or re-engineering processes before they are captured. Equally it can be tempting to automate personal, creative and novel tasks, but this won’t lead to the best results.

Ultimately, automation will change the character of operations as an organisation moves through its automation journey. Hopefully, it will quickly transform the quality of the working environment for every employee involved. Successful automation will establish a continuously changing operation which means it must support an agile approach.