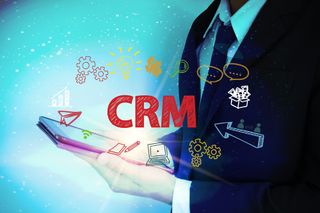 New research has established that the average salesperson experiences 20 lost sales each year because of problems associated with poor use of CRM (Customer Relationship Management) systems, costing their organisation an average of £10,000 per salesperson. In mid-size firms, the total cost of these problems is around a quarter of a million pounds, rising to almost four times this in large enterprises—and even more in teams that have a higher than average number of salespeople. With such a staggering problem because of bad technology, what’s going wrong? Before we look at CRM issues today, let’s have a quick look at where CRM systems came from.

The origin of CRM systems

In the ‘80s and ‘90s, CRM was either done manually, or through bespoke spreadsheets and databases on company systems. The first ‘proper’ CRM system came from Siebel (now part of Oracle) in 1993. The software was adopted by big and midsize firms; companies understood that they needed a centralised customer database, and that it cost more to acquire a new customer than to retain or sell to an existing one, so it was worth investing in software to support upsell, cross-sell and customer satisfaction.

Siebel’s stock price tells this story rather well. Founded in 1993, it employed 8,000 people within five years, and was named the ‘fastest growing company in North America’ in its sixth year.

But in 1999, a start-up called Salesforce arrived. It took Salesforce around twice as long to achieve Siebel’s success—14 years to reach just shy of 10,000 employees and $3bn revenue (despite a negative net income at this stage). Despite these impressive figures, there is a feeling that the megabrand may be becoming what it sought to disrupt: Salesforce was founded on the cloud sales model as a belligerent startup, well-known for staging protests outside Siebel’s offices with the well-known campaign “No Software” —and yet their subscription prices today have climbed to between $65 and $300+ per user per month.

Where are we now?

Today, almost a third of organisations still eschew systems like Salesforce in favour of spreadsheets. However, over half (51 per cent) of companies do use CRM systems to track customers across sales, marketing and client success teams.

One of the challenges to CRM systems is that as suites become more complex, it’s harder for them to stay agile and keep up with new demands. For example, between 1993 and today, a lot of business started to be done over email, although a recent survey revealed that only 48 per cent of primary customer communication is done over email today, which is far lower than many would expect.

In fact, communication methods with customers and prospects vary considerably; 39 per cent of salespeople said that they spend more time face to face with customers than they did ten years ago and 47 per cent say it’s easier to build relationships with customers than ever before. An over-abundance of technology has made us appreciate genuine human interaction over the phone or in person more than ever.

Similarly, we have also seen a decline in the ‘hard sell’ approach and the rise of the Freemium model or largely with the democratisation of information over the internet, allowing buyers to be more choosy and forcing sellers to be more transparent. This has made building relationships and a ‘consultative sell’ more important than ever before.

Although CRM is still a company mainstay, all is clearly not well. Three-quarters of sales and marketing professionals admitted spending an average of 9 hours on CRM admin and data entry each week—almost a quarter of a 40-hour working week and over 450 hours wasted per year.

Despite all this data entry, almost half (40 per cent) of salespeople say they’ve given incorrect information to a prospect because of CRM errors. Almost a third (30 per cent) say they’ve spoken to the wrong person and 14 per cent admit to the cardinal sin of speaking to a prospect when someone else from their team has just spoken to them—a sure-fire way of annoying, or worse, losing a customer.

This obviously affects revenue, but it affects team morale too. Over a third (34 per cent) of salespeople have experienced embarrassment because of bad CRM, which is especially acute in front of their manager.

Indeed, after a string of recessions and pre-Brexit commercial anxiety, it’s no wonder that salespeople are feeling under pressure. In fact, around half (49 per cent) say they’ve experienced anxiety because of lost sales, a quarter (23 per cent) admit to becoming angry after receiving faulty information and an upsetting one in seven (14 per cent) say they take their bad mood home with them after a bad experience at work.

Why is this happening?

We’ve already talked about some of the changes in the industry—and many of them affect how sales are done. The ‘sales funnel’ is rarely a funnel; it’s a labyrinth. This makes it difficult to track prospects. The obvious time to track a lead is when it first comes in, inputting basic information like the prospect’s name, email and interest details.

Inevitably, further information is lost down the line: a casual email to follow up with them, a brief note back, a phone call, a calendar invitation or call recording, a presentation given in a café — it’s all very easy to lose track of. Furthermore, with buyers being savvier than ever, deal conversion rates can be low, which often leads salespeople to question why they should record data in the first place!

Whilst many organisations are using cloud products, the evolution of technology has created a new central hub for an organisation’s software: its ‘productivity’ software, which includes email, word processing, spreadsheets, and the web. This means that suites like Office 365 and G Suite are dominating corporate software, which has a significant knock-on effect on everything! The acquisition of collaboration platform Quip by Salesforce is testament to this trend of combining CRM and a productivity suite.

What does this mean?

This is clear evidence that CRM will soon be subsumed into productivity software, becoming part of everything else we do. Tracking a prospect will be as simple as attaching a file to an email or embedding click-to-talk details within a calendar invite for a conference call. Similarly, the industry trend towards automation is helping to reduce manual data entry time, stripping useful information out of emails, calendar invites and the like, helping teams avoid wasted time on meaningless, frustrating and demoralising admin.

And companies understand this. There is an appetite for change: 39 per cent of salespeople said that their top business priority for the next year is to improve team efficiency – which surprisingly, ranks ahead of growing customer numbers.

In some ways this is a moment in time: CRM is in its third evolutionary phase, marked by the waning success of Siebel, then Salesforce. Technology is now supporting every part of the sales and marketing process, developing and changing—or dying out—as user demand fades.

This journey has not been without its challenges, but CRM is still alive and with us. It’s just a sleeker, more athletic animal than it once was, better suited to our needs, our psychology and our behaviours. There’s light at the end of the tunnel—and it’s guiding CRM down a new path.