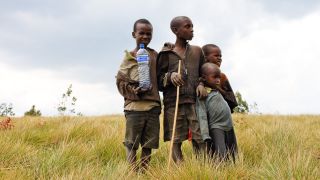 Of all the issues that the world faces, scarcity of water in developing counties is proving itself to be one of the most damaging. Over 783 million people worldwide – the equivalent to one in nine people, don’t have access to clean drinking water. No more so is the problem of finding a sustainable solution as pressing than in Africa. In developing countries, up to 80% of illnesses are linked to poor water and sanitation conditions – it is a problem that cannot be ignored. The saddening consequences of the matter mean that people are having to sacrifice their time, education and ultimately their health.

With no access to clean drinking water, communities are subjected to shocking conditions, exposed to diseases and deprived of one of the most basic human-needs, something so often taken for granted in the western world. What makes this situation even more frustrating is how avoidable it can be.

However, despite the efforts of organisations working to implement water systems across the continent, 65 per cent of these systems break within the first two years of construction – rendering them virtually unusable. It is often the case that generously donated solar pumps and filtration systems can be left broken for years, particularly in war-torn regions where a charity has had to withdraw and slowly the infrastructure fails to deliver. Without a sustainable method of maintaining water systems in place, their existence is failing to tackle the water crisis in a way valuable to those affected by it.

The United Nations’ Agenda for Sustainable Development states that, by 2030, they hope to achieve universal and equitable access to safe and affordable drinking water for all. The process of simply installing water systems in communities affected by a lack of access to clean water is no longer a solution that is adequate in achieving this goal. Yet, by finding a way to ensure these water systems are maintained properly, a real positive change can be achieved. It is in this instance where technology truly comes into play.

Modern-day solutions for a longstanding issue

The answer to one of the most fundamental problems that Africa is facing is no longer a utopian fantasy or centuries away. The sustainable maintenance of water systems can be realised by using mobile technology for the transparent and accountable collection of user fees.

Through the integration of mobile money, Internet of Things (IoT) and Near Field Communication (NFC) the fate of water systems can be secured. These original solutions, provided by Eseye and eWater, have so far led to over 160 eWATER taps in Tanzania, Ghana and Gambia, that are serving 25,000 people. It has allowed these people to gain access to clean water 24/7 by ensuring maintenance companies receive up-to-date information on the state of taps. Countries such as Haiti and Sierra Leone will be next to experience these benefits after signing up with the scheme.

Whilst a solar powered pump, filtration system, tank or local water distribution system is being installed or repaired, eWATER trains local engineers to maintain the system and upgrade communal taps. The key to ensuring the tap is working and maintained is the connection to eWATERcare, which makes it a true IoT appliance. Most importantly, the cloud-based eWATERcare application receives information on functionality, flow rates and sales in real time, allowing unusual behaviour to be highlighted and quickly passed to the local maintenance engineer. By highlighting this real-time performance of the water taps, any issues can quickly be identified and fixed– combatting the ultimate problem of inactive water systems that can no longer be used by members of local communities. With local skills, reputation and a level of responsibility involved, the engineer can quickly visit the affected tap to ensure repairs are carried out within 12 hours of a server alert. The use of this technology not only gives people access to clean water, but also works to reduce water wastage which, in itself, helps to combat one of the most significant problems within the water crisis.

Anyone wishing to use the new system can obtain an eWATER NFC tag from a local shop. The tag may be charged with credit using a Smartphone that includes NFC functionality. However, since many customers may not have a Smartphone, the system has been designed to allow anyone in the village to become a local distributor for eWATER credit. This is likely to be a shopkeeper who will purchase water credit in bulk using the integrated mobile money eWATER app. Anyone can then purchase water credit from the seller for cash, by touching their eWATER tag to the seller’s phone.

A huge breakthrough already having a substantial impact

With these technologies deployed, the UN’s goal of ensuring universal access to safe drinking water will move further towards reality. By highlighting the real-time performance of water taps, any issues can quickly be identified and fixed – combatting the ultimate problem of inactive water systems that can no longer be used by members of local communities.

While the initial impact of the low cost, proven IoT solution is undeniably impressive, it is merely the tip of the iceberg in terms of the amount of change that this technology has the potential to bring. It is forecast to increase by up to 10 million people over the next five years through the installation of 100,000 more taps. The impact this will have on the longstanding water crisis is unparalleled – though it may seem simple, it proves just how lifechanging IoT can be.

This is not the first time that IoT has been used to tackle some of the most prevalent issues that our planet is faced with. From enabling solar lighting for those off the grid that would otherwise be in darkness come sun down, to providing real time weather updates to assist crop farmers are just a couple of further examples of IoT projects making a positive impact for some of the world’s poorest people.

It has become clear that the use of IoT is truly changing people’s lives by making a sustainable and positive impact on the most critical and basic of human needs. The power of connected technology to solve issues and truly change lives across the globe cannot be underestimated.