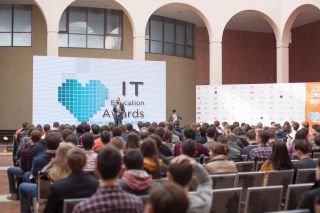 Few industries are as people-focused as the conference and events sector. However, technology is taking hold here. Will the trend continue in 2017?  Peter Eyre of Meetoo gives his views…

These days almost every industry relies on technology. The conference and events world is no exception – and the trend looks certain to gather pace during 2017.  While there are still many events that rely on nothing more than a few experts and their PowerPoints, others are being transformed by technology to become more immersive, engaging and interactive.

At the heart of this industry transformation lies not a huge, complex and expensive software solution but applications that are downloadable onto mobile devices or accessed via the web. These event apps often act as a comprehensive companion to the event, providing access to maps, attendee lists with messaging capability for faster networking and speaker notes as well as live polling and other ways to enable delegates to become more interactive.

These apps emerged onto the conference scene around few years ago to great excitement, but such was their success that more and more developers crowded the market and there were far too many to choose from. If Gartner had included event apps on its Hype Cycle, at this stage they would have reached the zenith – at their peak, but about to fall into the trough of disillusionment as many failed to live up to their claims or were simply more trouble to run than the value they offered in return.

However, the best apps showed staying power. They were refined by feedback from early adopters and evolved to become more usable and effective. Now, I believe they have reached what Gartner calls the plateau – a more sustainable place to be, indicating that they are about to become the norm rather than a novelty.

Why do I think this?  Because a series of technology-enabled, but people-focused trends are also having an impact in the events world; trends that the best and most effective apps will address. For example:

The continuing growth of the experience economy

To return to Gartner; in its predictions for 2017 it states that ‘immersive experiences with virtual and augmented reality are reaching tipping points in terms of price and capability this year and to 2020’. This is already being felt in the events industry where giveaways are being replaced by the offer of experiences. However, not every organiser will be given the budget to provide a cutting-edge VR experience. My view is that in the mainstream this will translate into a drive for more audience participation, interaction and engagement of the type that can be easily provided using the right event app.

Businesses are becoming more agile to respond to client demand – and, in my view, so must the events industry. If we encourage interaction and participation, then presenters must be prepared to divert from their script and respond. Live polling and Q&A technology that gives instant results and can shape a presentation or talk will be used to drive discussions where appropriate to enhance the learning value of the event.

The best apps enable polling results to be fed directly into a PowerPoint presentation and then visualised and displayed almost instantly. These results, for example, could lead a session into a completely new direction as it could pinpoint areas that need explanation or that are a particularly significant to the majority.

Data captured through such exercises will, increasingly be analysed and used to design future conferences and other events.

The need for honesty and the chance to question

We’re told we are going through a ‘post-truth’ situation where even the news is often fake. But thankfully there’s also a backlash. In general people are tired of being told what to think and crave more honesty. Industry events will increasingly aim for collaborative discussion to get to the nub of an issue or to ensure transparency and support. Delegates must have a way to make their honest opinion heard, anonymously if needs be.  If social media is encouraging more of use to voice our views, then events must reflect this new mood.

Simplicity all the way

Similarly, as life becomes more complex, we long for simplicity. Despite the growing sophistication of technology and what it can achieve, it will continue to be the straightforward but elegant applications that survive the hype. The past decade has shown that we are drawn to brands that make our lives easier rather than more complicated – the streamlined mobile that slips into our pocket, the pared down text or tweet, the online supplier that reduces ordering to one click, the taxi called via an app. The event technology space is so crowded that suppliers are tying themselves in knots to provide something new and impressive. However, event organisers are looking for the easy-to-use, the reliable, the affordable, the streamlined, but highly effective.

So I do believe that in 2017 the event app will go the way of the mobile phone. Nobody will be really worried about gimmicks – only tried and tested functionality. Nobody will comment when it’s used – it will just become an accepted part of every even as a pad and pencil were in the past. At the same time, only the best will emerge from the few past years of hype – to become mainstream events technologies of 2017 and beyond.