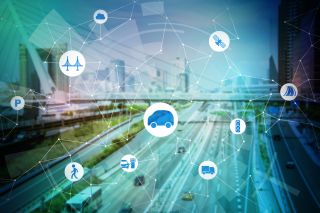 In the U.S. and many other countries, transportation is the second largest generator of carbon emissions. That stat means the transportation industry has both the ability and responsibility to protect the environment.

Telematics is a proven way to achieve that goal. It also enables fleet owners and the rest of the transportation ecosystem to operate more cost-effectively while providing customers with on-time service.

A subset of the Internet of Things (IoT), telematics is a broad, deep category of technologies for tracking, protecting and optimizing vehicles, along with their cargo, drivers and passengers. Most telematics solutions use a module that plugs into the On-Board Diagnostics (OBD) port, which is built into every U.S. vehicle manufactured since 1996. This module then uses wireless—often cellular, and sometimes satellite—to relay information to the vehicle’s owner or an authorized third party, such as an insurance provider. Examples include information about the engine, drivetrain, instrument cluster and other systems, as well as how and where the vehicle is operated.

Telematics enables a variety of applications. For example, fleet owners can monitor how hard their drivers accelerate and brake, and remotely warn them that they’re speeding. These applications help reduce accidents, moving violations, worker’s compensation claims and insurance premiums.

Fleet owners worldwide are increasingly using telematics to ensure compliance with the growing amount of regulations aimed at reducing carbon emissions. One example is the U.S. Environmental Protection Agency’s 2007 mandate for heavy-duty highway vehicles that reduces particulate matter emissions by 90 percent compared to the 2004 standard.

In order to comply with the EPA mandate, vehicles must have the ability to monitor their emissions system and use dashboard lights to alert the driver when there are problems. Telematics is a way to extend those alerts to the vehicle’s owner, while collecting data from multiple engine and emissions systems to provide a richer, deeper picture of emissions and efficiency on a per-vehicle and fleet-wide basis.

Stringent new environmental regulations aren’t the only factors prompting fleet owners to implement telematics. For example, consumers increasingly expect to know the location of a vehicle because it’s carrying an important delivery, or in the case of a taxi, they’re anxious about getting to the airport on time. Typically, a telematics platform can support a wide variety of applications, letting a fleet owner use it to ensure compliance with environmental regulations while also providing the granular, turn-by-turn location information that consumers want.

Telefónica de España is an example of how fleet owners are using telematics to minimize their carbon footprint while maximizing both their bottom line and customer satisfaction. A telecom provider in Spain, Telefónica has a fleet of 600-plus vans and other light vehicles for maintaining its network.

The telematics solution also alerts Telefónica when engines operate outside of certain parameters. This information helps the company catch problems before they escalate into bigger, more expensive ones, such as an overheating engine that, if not serviced, could result in a cracked block. These alerts also help Telefónica identify and repair vehicles whose problems result in excessive emissions, excessive fuel use or both.

Telefónica also uses telematics to identify drivers who exceed Spain’s 90 kph speed limit for commercial vehicles. This information has several benefits. It minimizes tickets and helps insurance premiums because Telefónica can easily identify drivers who need training regarding speed limits. Speeding also wastes fuel, so this is another way that telematics enables Telefónica to minimize both its carbon footprint and one of its biggest operational expenses.

So far, telematics has enabled Telefónica to cut its fuel usage by 10 percent, to 6.3 liters per 100 km driven. That’s less than the minimum consumption that its vehicle manufacturers estimate. At the same time, Telefónica reduced its CO2 emissions to less than 6.353 tons per year.

A Greener Future for the Globe

Telefónica is just one example of how telematics enables fleet owners to simultaneously minimize their carbon footprint and maximize their bottom line. Collectively, fleet owners can have an enormous positive impact on the environment.

Case in point: The U.S. trucking industry wasted nearly $50 billion on fuel in 2014 just from its vehicles sitting in traffic jams, according to the American Transportation Research Institute. All of those idling trucks create a lot of unnecessary pollution. Telematics enables fleet owners to identify less congested routes and in turn slash both their carbon footprint and fuel spending.

And that’s just the trucking industry in a single country. As Telefónica shows, many other types of fleets in many other countries also are implementing telematics: taxi providers, municipalities and school bus companies, to name just a few others. That means a future with less pollution worldwide, a trend with telematics at its heart.