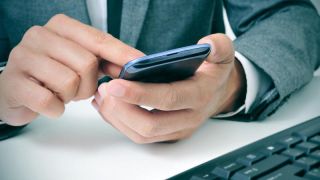 The idea behind ‘mobile first’ is simple: it’s about moving away from communications services being desktop-centric from multiple locations with mobiles being an afterthought, to an environment where services are designed around the user experience, with true ‘enterprise’ functions easily accessible from mobile devices.   Instead of the comms infrastructure being built around networks, devices, numbers, applications or services, the user experience becomes the heart of completely integrated and unified solution, with high quality apps.  Services and applications are delivered seamlessly and consistently, regardless of whether the network being used at that moment is cellular, Wi-Fi or ‘fixed’ line, whether via a desktop handset or mobile phone.  The experience is ‘native’ to the user, remaining consistent regardless of location or device.

This approach gives organisations huge flexibility over their communications and goes far beyond just cost-per-minute cost savings (which can be gained, for instance, by automatic rerouting of mobile calls and apps via Wi-Fi, or ensuring that more calls reach the intended recipient, thus reducing the number of callbacks required).  Putting control into the hands of users and unifying all business numbers can have a profound impact on reducing the number of missed calls,  speeds up responsiveness  and enhances an organisation’s professional image.

This is not to say that employees cannot escape from their phones when they need to: fact, ‘mobile first’ gives them far more control and flexibility.  For example, ‘user driven presence’ control’ (more on that later).

The time is right for a more mobile-centric business world.  First, many of us already use our smartphones as much as – if not more than – desktop devices, even when in the office.  38.8 per cent of workforce was mobile in 2016, according to Strategy Analytics Nov 2016. That trend is likely to increase.

Another key driver is that many legacy PBX or first-generation IP-Centrex solutions are either nearing the end of their lives, or are no longer keeping pace with what organisations want.  With people increasingly used to having a whole host of advanced consumer applications available on their phones, they want and will soon expect the same experience at work.

Perhaps the biggest catalyst for mobile unified communications has been cloud technology, which has opened up far greater innovation in this area than previously possible, with the ability to deliver a range of flexible services and pricing models at a rapid pace.  Both SMEs and larger enterprises can take advantage of this new world, which removes the need to invest in and own on-premise equipment, or to commit to cumbersome contracts.

This is all good news for the comms industry itself too.  Service providers who have struggled to add mobility to their portfolios are now free of those constraints, whether coming from the legacy fixed telco environment, or a mobile operator that has struggled to penetrate the enterprise market.   This helps them to stop losing the customer relationship that OTT companies delivering comms over IP have been encroaching upon: who saw WhatsApp coming?  By offering complete suites of integrated mobile unified comms, service providers can slow down the slide into commoditisation and instead, put themselves back in the driving seat and add value on an unprecedented level.

Comms resellers and service providers can also quickly reposition themselves as unified comms suppliers because they can ‘rent’ infrastructure and platforms, instead of having to build or buy them.  In fact, many existing service providers are going this route too, and instead of the ‘build your own’ approach, taking a Platform as a Service has become a viable and attractive offer. After all, when apps, mobile networks, APIs for component integration, fixed line devices and multi-level audited system access are all combined, how much development does a service provider really want to take on, let alone support in a fast-accelerating market?

With vendors moving to a SaaS mentality and innovating around their offerings, in turn, this means that firms looking around for mobile enterprise services have more choice than ever before, with a market that is becoming increasingly agile and fit for purpose.  The most interesting market players are those who are differentiating themselves and winning business that transform their customers’ operations.  Interestingly, a lot of the innovation is stemming from European vendors.

Learning from the Nordic region

Of course, it is still very early days, which is why eyes are turned towards the Nordic region, which has spearheaded ‘mobile first’ adoption, with Elisa in Finland being one of the most noted pioneers.

There, it is common for workforces to use mobile devices owned by their employers, which helps to simplify mobile device usage and creates more opportunity for native SIM control for calls, as opposed to the BYOD culture that has grown up in many countries where services are run over-the-top (OTT) of the mobile networks.

The rest of Europe is beginning to follow with the Netherlands being another country with advanced adoption, with countries such as France and the UK expected to be among the biggest growth markets for ‘mobile first’ unified-communications over the coming months.

When executed well, ‘mobile first’ offers far more than just a replacement for traditional voice services.  Since ‘mobile first’ supports call continuity, people can switch seamlessly from one terminal to another during the same conversation (for example, from a VoIP phone to a mobile phone), without the other party ever knowing.  Users can also have integrated voicemail management, with messages delivered to a centralised mailbox (not to an individual mobile or PBX/Centrex mailbox), with consistent forwarding rules and even email notifications with an audio file attached.  It is going to create a shift in how businesses buy comms services.

Increasingly regarded in the industry as an important innovation, ‘user driven presence control’ removes the traditional and clunky approach of depending on apps like email calendar scheduling.  Instead, users drive their preferences from their mobile device.  Users can then decide whether to accept calls, forward them to a team member or department, or let them go to voice-mail, depending on the user’s selected ‘in the moment’ state.  Team members can also see whether the user has marked him or herself as available or unavailable: again, this is a preference driven from the mobile rather than attempting to interpret text from a desktop or web-based calendar.  It’s far more practical: after all, while many of us treat our Outlook calendars as diary reminders, the reality during the day often changes.

Since user-driven presence control is an over-the-top service, it is not tied into the underlying comms system, giving users control: while there is much to commend the trend towards overall automation in technology, it is natural – indeed, better – that there is human intervention, dictated by the individual, based on real-time events.  The mobile, even when viewed as a business tool, is something that most of us regard as hugely personal.

While it is likely that many companies will continue to have a scenario where users have several comms devices, ultimately, they can also move towards a single mobile device being the gateway for controlling every service, network, associated with multiple phone numbers if necessary.  At the very least, in the short term let’s use the mobile to unify how devices are configured based on one touch by the user for each key, regularly used function.

Being truly ‘mobile first’ – while they may promote ‘mobility first’ as a strategy, mobile first goes deeper into driving benefits and this is enabled with native SIM control and strong apps.  Internal IT environment and mindset need to go beyond desktop-centric thinking.  This may be because of legacy equipment and a reluctance to migrate or seek hybrid cloud/on-premise solutions.

More than good enough – the solution will need to be able to provide a service that isn’t just a good replacement to a legacy PBX or Centex service, with obvious business advantages being clearly highlighted.

Excellent user experience – it may be a cliché but it is of vital importance here.  Service providers are realising that the battle for business could be lost or won on creating a great user experience, so there is a lot of industry focus on this area.

Interoperability and integrations – unified communications depend on seamless working across different services and applications, with Open APIs and connectors for integration and interoperability to embrace best of breed offerings into one ecosystem.

Predictable pricing – one of the concerns about unified comms service – particularly cloud-based – is that costs can quickly scale, particularly as volume of users grow. This is important why it is essential to look for transparent and predictable pricing, such as a monthly right-to-use fee with maintenance costs included.

Easy use and management – the impact on the user should be minimal and self-care encouraged, without the need to download complex client software that requires extensive training.  Obviously, for more complex requirements, the service provider will be there on hand to add the value.

Upgrades and innovation – one of the benefits of cloud-based technology is that it should support a rapid and regular pipeline of new developments.

A good fit for the organisation’s size – for instance, some solutions are really aimed at large-scale enterprises, rather than being focused on the specific needs of mid-sized organisations, while one that is designed for SMEs may not be suited for a larger enterprise. Also, some vertical markets are going to need services that are designed with their requirements in mind.

There are a lot of factors to consider when making decisions about ‘mobile first’, but equally, there are many benefits to be gained.  The idea of having ‘an office in my pocket’, with access to all the voice and data services we want, is not just a concept, it’s already here.