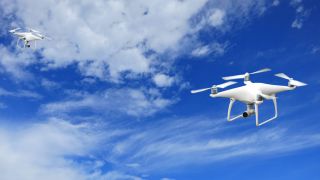 I expect, like me, you’ve seen some of the more ridiculous social distancing measures being employed by organisations around the world – such as hats made out of swimming pool noodles enforced by a café in Germany or the razors and hairdryers mounted on poles at a barber shop in Wuhan. And some of the more sensible ones such as the Government’s recent policy that in the UK masks must be worn whilst travelling on public transport, or staggered drop off and pick up times for nursery, reception, year 1 and year 6 pupils at English schools.

Clearly there are numerous ways that can be used to help people reduce the spread of COVID-19, however, some of the more innovative methods that are emerging are not necessarily coming from areas you might expect like medical science or economics. Instead they are coming from more surprising places - for instance from the research being carried out in the driverless car sector. Autonomous technology - whether you’re talking about autonomous drones in the air or on the ground, LiDAR, volumetric video or new social distancing software – can be employed to reduce the opportunities to put humans in to harm’s way. However, with it comes some important caveats.

Most importantly, you must ensure that the new technology does indeed reduce the risks people are exposed to.  If you’ve got a last-mile delivery bot, do people still need to touch goods, buttons, lids or other parts?  If so, how can these be easily and safely sanitised?  If you have an autonomous vehicle carrying passengers, then likewise, you still will need to ensure either a high level of cleanliness or self-cleaning mechanisms.  Victorian hospitals were built with brass door knobs which were naturally more damaging to bacteria than what we have now, so the level of cleaning didn’t need to be as high – but there’s a growing body of evidence that an enclosed space which is poorly ventilated and contains fabric actually increases the risks.

Providers of new technologies and techniques of course want to see them thrive, but the reality is that oftentimes this only happens if they have longer term economic benefits and justifications. Consequently questions should be asked such as what else might it be used for, how easily can it be repurposed. For instance an example of this happening is the reimagining of 3D perception software, which works with LiDAR sensors (more on that in a bit) to incorporate a social distancing monitoring function.

The problem with cameras is that they are ‘passive’, and rely on photons coming from a source, such as lights or the sun, to illuminate a target and it is difficult to accurately define size, location and direction over a wide area. This means that if the light is wrong then the camera can’t see. In contrast LiDAR is an active sensor meaning pedestrians, vehicles and other objects can be easily and accurately plotted in real-time, day or night.

The new application allows organisations to measure the distance between any individuals in real-time, along with speed, trajectory, and a count of other pedestrians in an area, whether indoors, outdoors, a simple courtyard or complex office block.

It has already been used to positive effect in Asia which is further along the Covid-19 trajectory. South Korea, for example, which has been reported to have been one of the most resilient nations in terms of recovery following the pandemic installed the system in and around municipal buildings and infrastructure, including airports in a bid to limit the spread and reduce the chance of a second peak, or indeed a third, fourth and fifth.

Another application of LiDAR in a post-Covid world is in 3D production. Using LiDAR to create augmented and virtual reality reduces the need for expensive studio time, which can cost up to £20,000 per minute of footage, and instead enables location production. Digital LiDAR’s high resolution sensors build spatially accurate pictures generating 3D representations of people, environments or moving objects without the need  for special lighting (even outside) or complex computation driven by supercomputers. By combining this capability with real time panoramic imagery means that the challenges traditionally associated with volumetric video such as capturing a real scene in enough detail to create a detailed replication of reality is eradicated.

The implications of Aspect 3D are significant including changing how live entertainment could be presented in education, theatre, sports venues and TV. With universities and schools moving towards a blended learning model, TV companies currently working on audience-less, real time programming and theatres looking at pay-per-view models this technology could be a game changer for many sectors. Crucially it also could be used to deliver richer and more deeply engaging experiences to those unable to travel during the Covid-19 recovery period.

And finally the Covid-19 crisis has been predicted to be the catalyst for commercial drone delivery.  The first findings of Protolabs’ Horizon-Shift Report, involving 325 aerospace business leaders in Europe, highlights an increased appetite for more investment into the fast-track testing of robots and drones. Many organisations have put significant R&D investment into drone technology. For instance in 2018 Amazon filed a patent for ‘anticipatory shipping’ which aims to ship our next package before we even order it. The company believe that the lag time between clicking ‘buy’ and the item’s delivery time is a barrier to many shopper and so by combining big data and drones it can cut delivery time and encourage increased levels of online shopping.

However, as a result of the pandemic drone projects are being fast tracked. In the UK at the end of April it was announced by the Transport Secretary that the country would begin an £8 million initiative to test drones to deliver medical supplies and equipment to frontline health workers battling the coronavirus pandemic. One of the most powerful drones are equipped with remote trigger dropping systems for deliveries, loudspeakers, recording cameras, in addition to optional sprayers for disinfectant and capability for BVLOS operation.

Technology is an enabler

What is clear from the above three examples is that the surge of technologies from driverless car research is providing some unexpected side effects all of which can be capitalised upon as we move forwards in our recovery from the Covid-19 pandemic. In my mind technology is an enabler and there has never been a time when enablement is paramount.